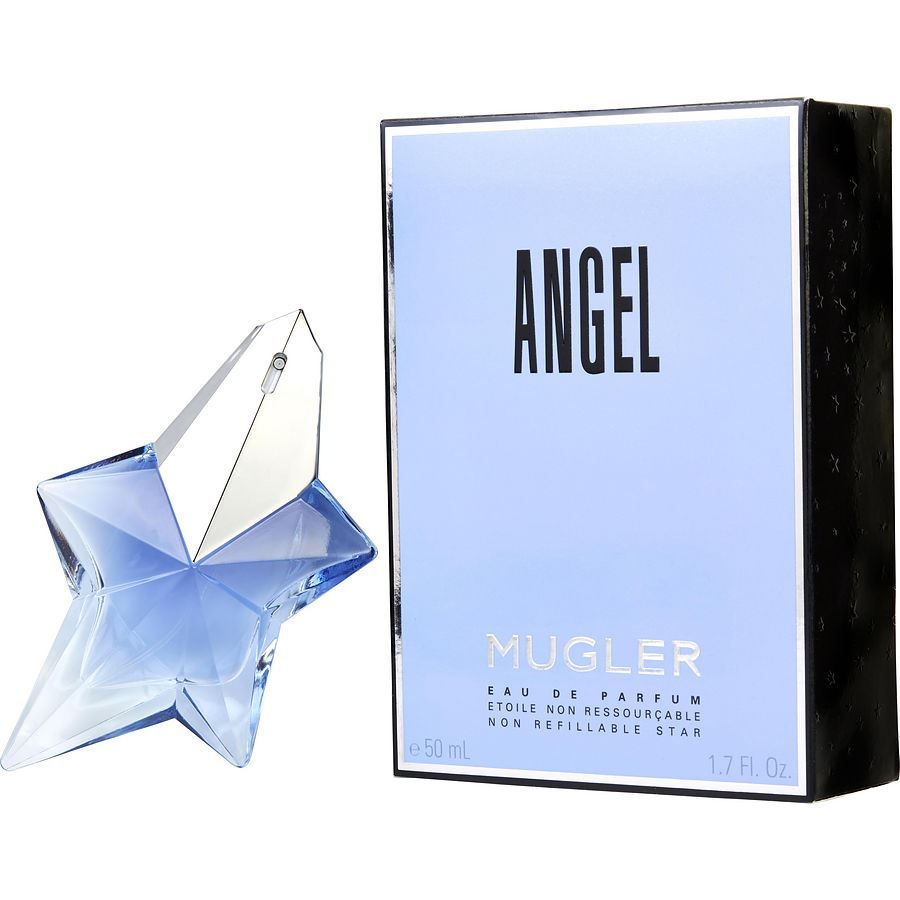 Where do you start with a perfume like Angel... It is the most polarising perfume I have ever come across; you will either fall in love with it or chuck it out the window before having the longest shower of your life. I first came across Angel in 1999, it reminded me of Christmas (IDK why), maybe the patchouli, sandalwood and chocolate scents. It is thick, rich, oh so intense. It has been my favourite for 20 odd years, but I will never wear it if I'm not feeling 100 per cent because putting Angel of when I have a headache or I'm nauseous because the intensity of this perfume makes me worse. It fades out beautifully and leaves an intoxicating scent on your clothes for days. I will always have a bottle of this on my dresser for those days when I'm feeling 'myself' as I find the scent empowering.

Are you ready for the QUEEN MOTHER of fruitchouli fragrances? The trailblazer that started it all, back in ‘92? Well fasten your seatbelts, because Angel ain’t for the meek. When this perfume launched; it was considered so incredibly weird and unusual that many in the beauty biz predicted its imminent failure. Fermented fruit, chocolate, pralines, cotton candy, and an obscene overload of patchouli— all in one bottle?!? And it was shaped like a star, with blue liquid inside?!? Well. For as many women who totally hated the stuff; there were an equal number of women who became hooked instantly, and I was one of them. Back then Angel was even more expensive than it is now, and most of us had to settle for the precious little 0.8 ounce bottle of EDP and those tiny sample packets of lotion and shower gel. But I keenly remember huffing the Angel tester at Macy’s and saving up for months for my very own bottle of this perversely gorgeous and utterly intoxicating stuff. Once in the ‘90s, my mom was trying on a mohair sweater that still smelt of the woman who’d tried it on before her. My mom commented, “At first I thought she was wearing Angel, but then I realized it was just her armpits.” The two of us Angel-fiends had a good laugh over that experience, because it perfectly captured the olfactory tension between the heavenly and the gross that makes Angel so fabulous. Overall, Angel smells delicious to me, but in the same way that Thai food made with fish sauce tastes delicious: There is just enough “funk” to make it special. Fast forward 27 years, and Angel is still going strong— perhaps more importantly, it paved the way for hundreds of much safer, sweeter, more sanitized patchouli gourmands (most notably Coco Mademoiselle, Flowerbomb, and La Vie Est Belle— not to mention scents like Pink Sugar and Fantasy, which went full-on dessert mode and skipped the patchouli entirely). While the Queen Mother’s progeny may be easier to wear, and I do own and wear several of them, I will ALWAYS have a special fondness for the original Angel. I have to wait for cooler weather to give it a proper wearing, but it’s always something I look forward to in the fall. One spray, and I remember all over again they this is one dramatic dominatrix! She’ll take your nice fluffy cotton candy and stab it with her spiky black stilettos. And I LOVE HER for it. Yum ♥️

Awful, headache inducing perfume. Old lady perfume. This was a gift. I wouldn't spend a penny on repurchasing this.

I cannot figure out if I love or hate this fragrance. Let me explain. I purchased Angel and Aura at the same time, because I simply adore the Aura EDT. Angel was an impulse purchase. Anytime you have refillable bottles with a luxurious fountain of sweet smelling juice, I will be there. Angel must be as lovely, right? I sprayed it in the air of my living room the first time, to experience it without my body chemistry. Upon the first wiff, I smelt the peach potpourri my grandmother used to keep on the vanity in the restroom. I was intrigued and appalled at the same time. Then, the lusty, sticky, sweet animalistic smell hit me. It was like smelling sexy Voodoo from the French Quarter it's self. It was dark, dirty and sexy. I cannot explain it! I didn't like it, but then kept going back to smell it! I sprayed it on my wrist, and out came the smell of cinnamon rolls, sex and caramel. I sniffed myself all day. Dried fruit, ancient spices. Bodies dancing in a club on a hot Miami night. Everything naughty. Everything racy. This fragrance is definitely not demure, or for the typical occasion. My husband said I smelt unbelievably sexy, in a very edgy way. I feel it is a very sexual and unladylike fragrance. Use with caution! This is no Angel!

My brother-in-law went to an auction and this was in a box he purchased along with Red Door (wow, um, no thank you), Chantilly (so soapy smelling it gave me a headache) and Harajuku Lovers Baby (Love's Baby Soft anyone?). At first whiff, I about threw it in the trash. I thought &quot;who in the world would wear this chemical bomb?&quot; but for some reason I decided to keep it. Call it intrigue, call it a hunch, but I decided one day to give it a try. This is definitely a case of 'don't judge only on a bottle sniff'. Once on, it settled into a long, warm and sweet chocolatey spell and all kinds of people (including a sweet old man at the grocery store) complimented me on my fragrance. It is now my signature perfume, and I'm so glad I decided not to toss it. The only negative is the bottle. Being star-shaped, it doesn't stand to show off on a dresser, and it may be cumbersome for some people to handle, especially if you have arthritis.

You will either love or hate this one, there is no inbetween. To me, this is the sexiest sofistication in a bottle. It is dark, bold, sweet, musky, earthy, deeply erotic. The sillage is amazing, use VERY sparingly, otherwise it will turn into headaches. The lingering scent the next couple of days is even more intoxicating, I can't stop sniffing myself :-) But.. it is definitely not aimed at fragile, sensitive, shy, romantic types who like delicate, flowery or fresh, citrusy scents. It compliments a bold, sexy, confident, mysterious, strong woman who knows what she wants and goes for it. If you are one of them, men will go crazy around you, it is a dangerous seduction weapon :-)

Oooh I love this fragrance...even though Thierry Mugler 'Angel' is quite an old perfume, I can still relate to this in many ways. My mom used to wear this on a daily basis from about 2006 or was it 2005 (?) until very recently. My grandmother was also a big fan and used to spritz this on her neck before heading to her work place every morning. Even my ex used to wear this (well to be specific the 'A'men - male version of Angel haha). Following the family tradition, I used to spray this too before heading to my office every week day. I loved the smell of this (very unique - tonka bean, vanilla, etc) as it was unlike any other scent out there. Even now, having had a sniff of so many generic fragrances in the department stores, there is something about Angel that sets it apart from the many run-of-the-mill fragrances out there. I would re-purchase this in a heartbeat - not just for the sake of nostalgia lol, but because there is nothing else that smells remotely like this. When you wear this you can be near-sure that you will be the only one in your location who is wearing anything in the same vein. it is definitely in a league of its own! And for that it is one of my all-time faves! Selena x ~ My HG list ~ (I've sampled many 100s of skin, hair and m/u products over the last decade and a half, as I love constantly trying out new stuff - usually sample sizes via e-bay, also plenty courtesy of a friend who works at Sephora. Thought it might be useful to share my top 10 must-have products, subject to change if and when I come across something more effective) 1. Hair Loss Treatment: ‘Divine Herbal’ - Hair Oil 2. Lip Balm: Jack Black - Intense Therapy 3. Pigmentation + Anti-Ageing Treatment: ‘Divine Herbal’ - Facial Treatment Serum 4. Cleanser: 'Paula's Choice' - Skin Balancing Cleanser 5. Concealer: ‘Mac’ - Studio Finish Concealer 6. Lash Growth Serum: ‘Divine Herbal’ - Divinelash 7. Foundation/SPF: ‘Juice Beauty’ - Stem Cellular Repair (warm glow) 8. Face Scrub: ‘Sisley' - Botanical Gentle Buffing Cream 9. Moisturizer: ‘Antipodes' - Rejoice Light Day Cream 10. Hand Cream: 'Origins' - Make A Difference Rejuvenating Hand Treatment

1992. Since then nothing else! Its a permume that you will love it or hate it, Thats Angel and suits to a very specific type of women. Does not suit to fragile, delicate women. Its a hard scent full of vanilla, chocolate and a taste of outer space, something out of earth, a strange bitter hard scent mixed with wet soil. Thats how I can describe with words this perfume. Its glorius to wear it and walk proud knowing that everybody can smell that you are near by. Not all men like it. The ones who love Barbies they hate it. The ones who prefer wild cats love it. Thats what my 25 years experience says.

I never purchased this but have used it. I find the scent sickening. To make things worse, it lasts forever, even a little after bathing. It has pretty strong sillage, too. All this would be great if I liked the scent. Maybe, it is the patchouli that I find so offensive although I can tolerate patchouli in moderation. Everyone has different tastes in fragrances and many like this, apparently. My one try of Alien was much more favorable.

I couldn't rate this bad just because it didn't work on me because it is an important perfume. On me on the opening it was Ok at first because it was just the patchouli note. But then it got terrible as it was drying down. It smelt like rubber on me I couldn't believe it but it did. Strange because I have the 06 or 08 extrait and I love that. Its a patchouli, chocolate, vanilla, caramel mixed in are some floral and it smells amazing. So I will keep the extrait and will either sell or swap my 1.7 ounce bottle of this because sadly it just doesn't work on me. I could not write a oh this smells so bad and just bash it because that's not cool. I see it on other sites and I don't like it. If you dislike something there's a way to say it. Anyway sillage and longevity are excellent with this. I think the dry down is amazing but I wonder if it smells the way I do to other people and I just don't want to take that risk to find out. All in all this is a pioneer in the gourmand world of fragrance, without Angel who knows what that catagory would be like. So I'm super glad this is around and if you can't wear Angel like me try Muse its amazing chocolate heaven with vetiver it truly is an excellent choice.