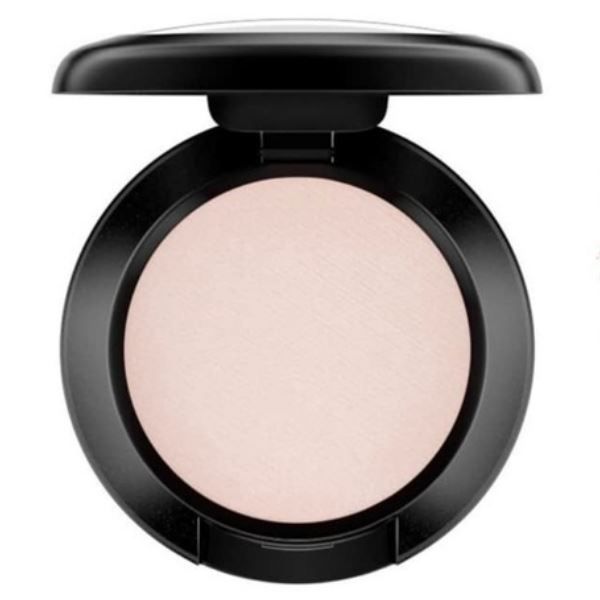 Shroom is a MUST have in your eyeshadow collection. Perfect on its own or paired with other eyeshadows.

Beautiful! I was literally talked into buying it when purchasing another shade and I'm SO HAPPY I gave in! It works wonderfully as a highlighter and equally well on its own. And if you buy it as a palette insert, it's very reasonably priced - in its own box it can be expensive but still worth it. It seems to last a long time, even without a primer, doesn't crease, and is very easy to apply.

This is the only eyeshadow I've ever hit pan on and repeatedly rebought. In my teens I was obsessed with this color, I wore it under every shadow and any day I wanted a natural look. As my tastes have changed, I prefer a matte base shade, but I still consider this to be a beautiful eyeshadow. I have very pale skin and this is a very close match to my natural color, with a fine shimmer and a slight pink hue. It can also be used as an inner corner highlight or eyebrow highlight. If you are pale and like nude satin shadows, this is a must try.

Go too eye shadow shade. Universally flattering, pretty highlight. Long lasting with or without primer. In my makeup bag always.

I got this as a Christmas gift seven years ago, and being a naive teen at the time I let it sit for a couple of months because I thought it was too subtle and boring. Luckily I gave it a chance, because this was probably the best beauty gift I've received and since I'm not big on MAC because of my oily skin type I never would have tried it otherwise. This is my holy grail eyeshadow. I'm not big on super colorful dramatic eye shadows and this is a perfect, subtle highlight that makes my eyes pop like no other product. Seriously. I've bought it twice now and hit the pan on my current pot a looong time ago and I'm still digging because I want to use every last bit! When I'm doing my makeup in the morning I love watching my eye transform and immediately look brighter, luminous and more awake. The transformation is startling. I apply it from lid to my brow bone under most shadow looks, but often I will wear it by itself or just with eyeliner and wow, it just makes my eyes look so beautiful from the inside out. Im not enough of a makeup junkie to accurately describe the color, but I can tell you I love it and I'm going to keep buying it as long as MAC produces it!

This is another Mac staple, this is a beautiful vanilla frost neutral great for highlighting your browbone it has an opelescent pink shimmer, it is difficult finding a Mac eyeshadow that can't be paired with shroom.

Shroom is a MAC classic. It's a neural shimmery highlight. Phloof! is icier and slightly pinker. Shroom is more straight up pale ivory. My Mom, who is nearly 70, has been through two pans of it. If I was designing a 15 pan palette, this would be in it.

I don't find this product the greatest consistency for my eyeshadow and its tough to blend, but discovered it is a wonderfully natural looking highlight for my fair skin and super blendable with a fluffy brush. I love it as a highlighter on the high points of my face!

I've bought Shroom several times over the years but most recently I cashed in six empties and got a free one through the Back-2-MAC recycling program. The freestanding MAC stores will let you select an eyeshadow instead of a lipstick. Department store MAC counters (such as those at Nordstrom or Macy's) will only let you select a lipstick as your freebie. I asked for Shroom because I knew I'd use it and sometimes I tire of taking home something trendy that doesn't work out. I've had this color before and each time I eventually used up the whole pan because it's a good basic. The shimmer is subtle and doesn't look too frosty. Some reviewers complained of it looking chalky. I consider Gesso, which is pure white, or the eggshell Blanc Type to be chalkier than this. Shroom is warmer than Gesso. Of course, my complexion is fair so on me Shroom shows up as a luminous cream. I love having a shade like this for highlight but also to smooth out and blend the crease when I'm almost done with my eye design. It also works in the inner corner to cover blue. If you'd prefer a matte, Brule is more matte although it's technically a Satin. Ricepaper is yellower than Shroom, Orb is peachier, and Phloof! is frostier and cooler. Last year I bought a limited edition ivory shimmer MAC Dazzle Shadow only to discover that it irritated my eyelids. Granted, I have uber-sensitive skin, but this was the first MAC shadow I'd ever had trouble with. So that one had to go back and I wished I had bought an older formula, something like good old reliable Shroom, which has been in the line for sixteen years or more. MAC has different textures of shadow. Shroom is a Satin. Most Satins have more iridescence than a Matte, but not as much as a Frost. I find Shroom to have plenty of pigment. Sometimes when a shadow is a pale color, reviewers say it's not pigmented, and I think they really mean they wanted a shade that shows up darker or even lighter on their skin, or they wanted a matte which is truer to the color in the pan than a shimmer, which reflects more light. An ivory color will look ivory on. "Pigmented" refers to the amount of dye used in a product, not the level of depth of the color. Something white can be heavily pigmented. All the MAC shadows I've owned have been amply pigmented compared to other brands. I've had trouble with Clinique shadows being too sheer, but not MAC. Stila Kitten might be more pigmented but it's also a lot more frosty. MAC shadows are easy to blend, especially with a blending brush like #217. I love the flip top lid with the window so you don't have to guess which color you're picking up. Unfortunately I have been buying less from MAC and trying to buy more from cruelty free companies, but MAC has good products and decent prices. At one point, MAC didn't do animal testing but that was before Estee Lauder bought the company. It owns Bobbi Brown, too. It's hard for me to completely write off MAC because I used the brand for years and some of my favorite products have remained in the line. I've been buying from Charlotte Tilbury and Kat Von D. I buy most of my skin care from Paula's Choice, which is vegan. Someday I hope MAC will become more bunny friendly.

I almost didn't buy this shadow because I was afraid it would be too sparkly, or have too much fallout, like sugarshot. I am so glad I took the plunge. I have definitely been disappointed by some of MAC's shadows--color, performance, or both. This one is AMAZING, however. First, the color. It is so unique. The way I would describe it is a cream/dove grey sheen. I hope that doesn't sound hideous, because it is spectacularly beautiful. It also performs flawlessly--as a browbone highlight, inner corner, a pop of shine in the center of the lid, even as a face highlighter if you're looking for something very pale and very cool. It adheres to the skin beautifully, no fallout, just magically.