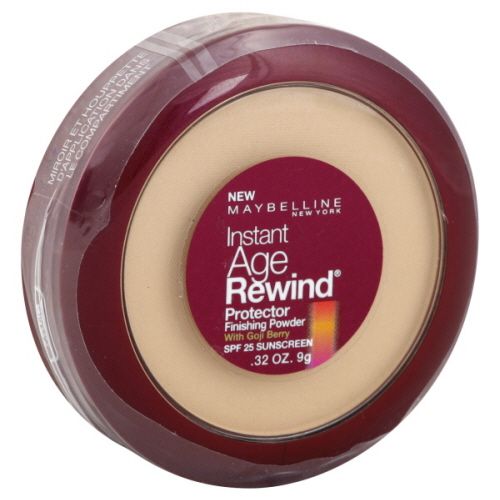 Even though this is discontinued, I picked it up on Amazon dirt cheap. The reason I bought it was because it was supposed to be a dupe for MAC MSF Natural. It does have tiny shimmer in it, but it isn't noticeable on the skin. I wouldn't say this is an exact dupe for MAC, but it comes pretty close. Hell, I'd rather buy this than fork out $30 for MAC. I've been trying to only splurge on limited edition items from MAC, and just buy drugstore everyday makeup, when it's pretty much the same thing. I don't like the packaging of this compact though. It's really small and the flip down thing at the bottom annoys me. Bottom line: I would most definitely repurchase this.

I picked up this powder at Walmart when it was on clearance. Coverage: medium Lasting power: mediocre Shine control: 6/10, may it's the liquid foundation that makes me look oily, but I've seen much better shine control in elf's mattifying powder. Finish: satiny - this powder has a slight shimmer in it Packaging: ordinary compact, I wish the mirror was at the top instead of the bottom so that I can actually see my face while applying. Ingredients: talc and paraben, 'nuff said I will not repurchase

I didnt like it at all but I can say that for PPP NC10 extremely pale that creamy natural fit that bill. it is like almost white which I wanted. (no matter how tan it looks in pan) ok but I do not like the glitter. or the finish, or the oil control ...which it didnt have, no coverage and most of all.,.... I didnt like how it totally within a short time BROKE UP my foundation underneath which nothing else has ever broken up. and that was my revlon colorstay whipped creme which stays perfectly put with other powders but this powder removed it from my face in patches within minutes. only thing I like was shade creamy natural again VERY pale.

I've only worn this powder a couple of times but I can tell it's going to be a new favorite. I bought it for 12$ Canadien at Walmart. It has a beautiful soft matte finish that makes my skin look airbrushed and a decent amount of coverage. The shade &quot;Buff Beige&quot; brightens up my complexion (it has yellow undertones) and is a good colour match. (So far) I haven't broken out from using this., I personally don't have a problem with the packaging, I think its functional and very durable. As for being a dupe for the MAC msfs it does come pretty close. There's actually a better colour selection, a less matte finish, and it's 25$ cheaper. The only downside is that it's not great st controlling oil. I would continue to buy this product ! :)

I love this and I am questioning right now why I just bought a different powder the other day that ended up not being nearly as good. PROS: Soft on the skin, makes my pores appear smaller, and Doesn't dry my skin out. I'll be picking this up again soon.

I also purchased this based on MakeupbyTiffanyD's raving about it. Got it on clearance because they're supposedly re-packaging the product. So, yay for the low price! I liked the finish it gave me. But, as the reviewer below mentioned--it broke me out too! Really badly. I have sensitive skin but I have never had a breakout like the one this powder gave me. Caused a cystic pimple underneath my eye right on my cheekbone--very weird spot for one of those. Was disappointed because I liked the look it gave me.

This is an exact dupe for the MAC Mineralize Skin Finish Natural. Such a light weight powder. It feels like nothing on the skin, and It combats shineon my oily skin all day long. On top of may foundation, it makes my skin look absolutely flawless without looking cakey, which is so hard to find in a compact powder. That being said, I hate the packaging. Because this is such a perfect compact to throw in a purse for touch ups during the day, the little mirror in the bottom compartment for the sponge is hard to work with this. If the packaging was more like a MAC compact, this product would be PERFECT.

I love love love this instant age rewind powder! I was looking for a cheaper drugstore dupe for the mac mineralize skinfinish powder and this is defiantly it! I even see myself reaching for it more than the MMSF. I apply this after I put on foundation or a bb cream and concealer with a big powder brush. It gives me a very matte but also dewy and luminating look to my skin, it's quite pretty! It has not made me breakout or added extra oil to my already oily skin. I would highly recommend this powder, I'm kind of obbessed with it!

Update 10-9-12: I just called Maybelline, the product has been discontinued with no plans to re-issue. Darn! Really like it. The plastic hinge on the compact completely broke away soon after I began using it. I heard about this powder on YT Makeupbytiffany as a dupe for MSFN. Well I've never tried the MSFN but I am a long time user of the Pur Pressed Mineral Powder. In the winter I use it lightly over a TM, now the LM, and in the summer alone over a stick makeup concealer on my nose chin and forehead to blot out rosacea redness. I apply it with a powder brush, and when used alone (with heavier application) I then buff it is with a kabuki brush. I would say it's a bit less creamy than the Pur, which actually is better for warm weather. I hate using a brush on a sweaty summer face and putting it back onto the product to complete application, so enter the Maybelline as a cheaper substitute. I really like it, the color Nude is a good match for my NW20 skin, it covers nicely with minimal caking, and it isn't mask-like. I have normal to dry skin so I am not concerned about oil break through, but I have facial sweating in the summer, and this seems to last with only a nose swipe mid-day in the hottest weather. I wouldn't recommend this as a main foundation for those with oily skin, but it might work well over a primer and-or foundation which controls oil. Both Pur and the Maybelline have sturdy compacts, but the mirrors are under the powder in a separete compartment for the brush or puff. Not the best arrangement but at least there is a mirror which makes this good for purse and travel.

I fell in love with this product fast! I found it at Walgreens on sale for $4.19! I bought a couple just because I heard Makeupbytiffanyd liked them and compared them to mac msf natural. I loved the finish, it gives you a glow, and it keeps me shine free all day. BUT, it broke me out!! I didn't realize until I went back to my mac msfn but it gives me large zits that are cystic and I had never had cystic acne before. Giving it 3 lippies because it is a really nice powder, just not for me!