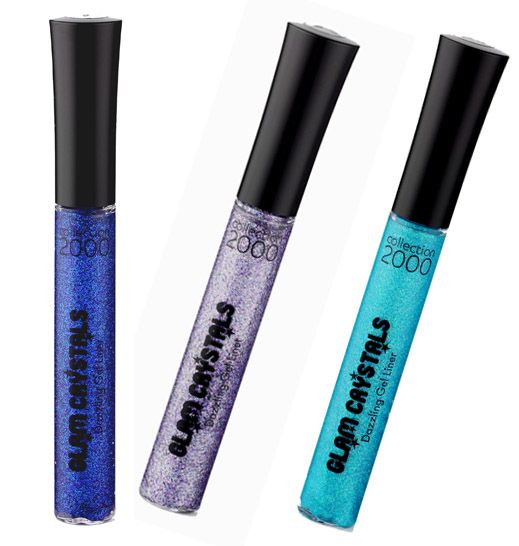 I have these in #4 Hustle, which is a silvery green colour, and #11 Shake it up!, which is meant to be a purple. They're ok - they do the job for parties and costume makeup - but they're not great. They're a bit too watery and separate easily - the green one shows up as silver rather than green; the purple one shows up as a weird oily washed-out colour which is so sheer it just adds a little bit of glitter to a look. Wouldn't necessarily buy again.

I love these little liners, they are so good - it's easy to use the application brush it comes with, it stays on well - actually so well that if you get it in the wrong place, remove it immidately because once it dries, it can be hard to get it off without ruining your makeup.

I have the silver one, mostly apply on the lower lash. Once It got into my eyes, I had to take off my contact lens and re-washed them so you might be careful when apply it especially if you're wearing contact lens.

These are THE BEST glitter gel liners I have ever used. I have the black liner and the gold. I spent a while searching for a good glitter gel liner and I normally found that they wouldn't last very long and the glitter content was minimal. However, collection 2000 have hit the nail on the head with these and for the price, you cant go wrong. They're much more 'glittery' than some of the more expensive brands iv used but not glittery in a horrible or tacky way! Would DEFINATELY buy again!

I received this from the UK from a fellow mua'er. I love this black one. I got compliments from a stranger that was a man! This last really long and its so easy to apply. I was surprised to find out that this was a drugstore brand. Blew me away because I thought it would be a higher end product. You UK people are really lucky to have such awesome makeup brands. I am so jealous! I love that every time I blink or look down there shiny little glitters. It is very subtle and chic. &lt;3

Repurchased these over and over! I have the gold one think its called 'funk' and the black one(forgot the name!) but needless to say I love them! Total steal and super colour pay off and staying power.

I Absolutely love these been using Funk for years since uni when I found it by accident its their sort of white gold glitter and looks beautiful as a flash of glitter liner over Bourjois Beige Rose eyeshadow. Around Christmas I always wear these two together and then Mac Lustering Lipstick....brill combo! I have just bought Dancing Queen which is their red glitter liner with different coloured glitter flakes in it... amazing I am loving this for just some glitter on lower lash line or over the top of eyeshadow for some truly festive sparkle. I have had NO problems with it lasting wearing it from 8 am until the evening most days at the moment Funk that is and it stays perfectly. 10/10 for me!

I have a lot of these in different colours: black (two different kindsof black, one has gold in it), gold, green, silver and pink. I love glitter and use it all over the eye lid for a bold 'dazzling' look and usually get compliments on it. They're very cheap so I'm always picking them up in colours I'm not quite sure of to test them out. The bad things I would say about this product are: -It's quite difficult to apply. What I do is apply it on to my finger and then dab it on my eye lid. Sometimes I wait for it to dry and add another layer or two for fuller coverage. -It doesn't last very long, but I usually wear it for night time so I only need it for maybe 4 or 5 hours. Unfortunately the glitter sometimes gets in my eye which is really irritating. I'd definitely recommend this product if you want bright, bold, glittery eyes!

I have this in purple, and you know what, for a budget makeup brand this is actually a fantastic glitter eyeliner. For a stronger glitter look I dab a line rather than draw a line, and you should keep eyes shut for a minute or so unless you want glitter on your eyelid!

Best glitter eyeliner I've ever used. Looking at some of the negative reviews here, it's hard to believe that they are talking about the same product. I find the application to be *really* easy, I've never had any flaking, no irritation whatsoever. You do need a heavy duty make-up remover to remove this gently, but that's only to be expected because of the large chunks of glitter. I have several Urban Decay and Too Faced glitter eyeliners, and these are *so* much better. They're also much much better than other cheap/teen companies. One of the things I like the most about them compared to other brands is that the brush picks up a LOT of product. People generally want to wear a glitter eyeliner when they are going out and want to get noticed, so what's the point of having a glitter eyeliner with a thin brush that only picks up like three pieces of glitter with each dip? (This is one of the things I don't like about Too Faced liners.) You can still draw a thin line with these if you're careful. And you can draw a thick line or use them all over the eye as an eyeshadow *really* quickly. The glitter is often of a more complex shade than those of other brands, the colours are very intense, and the staying power is insane. My favourite shade has got to be Shake It Up!, it's a bright purple/blue that looks great with my brown eyes. I love wearing this when I'm going out, I just put on some primer, bright purple eyeshadow, black eyeliner, and then this all over on top of the eyeshadow and eyeliner. It stays on FOREVER, like, literally, all night and all of next day, even though I have very oily eyelids, and looks absolutely gorgeous. I also love Rock Chick, a black with silver glitter. I use it with the purple as an eyeliner, or on its own, on top of another black eyeliner, with no shadow. Worn alone it does indeed look casually rock chick-like. Dig It! is great too, it's a black with gold glitter. And then there's always Dancing Queen, which is a bright fuschia pink with complex coloured glitter. All in all, these are glitter perfection.