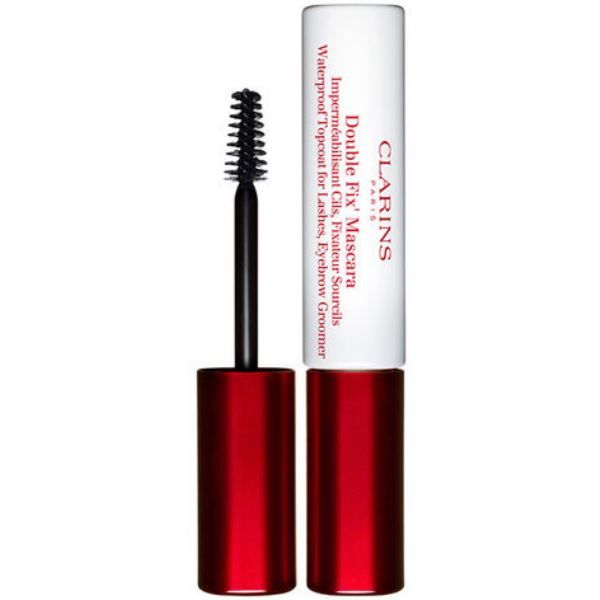 This is a good mascara if you like thin, spread and long lashes. Opens your eyes a lot and provides a fresh and relaxed look to your face.

just use very lightly as a topcoat follow by a quick separating comb, otherwise lashes stick together and becomes straight. the main problem is it irritates my eyes and makes them red so i have to then follow up with visine. my dilemma: raccoon eyes vs. bloodshot?

OMG, this stuff is great!!. Before I got to know this product, I could only use tubing mascara's, cause every mascara smudges on me (very badly). When putting this as a topcoat, all mascara's stays in place all day long. This is incredible. The only negative point is the brush - it is so tiny and it seems as if there is no product on it. Hence I use another wand to put the double fix mascara on - this helps.

Wohooooo! For years I have been wearing only tubing mascaras (Fiberwig, Mac Gigalash, Blinc) because my eyelids are very oily and even waterproof mascaras end up smearing under my eyes after a few hours. I have only tried this twice but I think my tubing mascara days are over! The first time I did have a bit of smudging so I made sure I really coated my lashes the second time (I put this over Too Faced Better Than Sex both times). It did not budge all day! It rained and it didn't budge. I even took a hot shower where I rubbed my eyes and I only noticed a small bit of smudging when I got out. Even a tubing mascara will not hold up to that! I agree with some of the other reviewers about the small, conical brush. It takes a lot more work to coat all of your lashes with this tiny thing and I think this is why I had smudging initially. To make this work, I drag the brush against the side of the tube to make sure it picks up the product (you can see it as it's pretty cloudy) and generously coat my lashes. Removal was fairly quick and easy - I just used jojoba oil on a cotton round. This is more work than tubing mascaras but far better than trying to take off waterproof mascara! This isn't an especially cheap solution to smudgy mascara! This is $26 a tube and you are layering it over another product so the cost adds up. I am going to give this a go over some cheaper, drugstore mascaras so fingers crossed! I will definitely repurchase!

Clarin's I am gutted, please change the brush back!!!! I have been using this product for quite a few years now and I purchase a new one roughly every 6 weeks. I can honestly say I cannot live with out it as it really does stop my chosen mascara from smudging around and under my eyes. I have also introduced Brides to this product and my friends too..........But..........yes there is a big but........ I am sorely disappointed that recently Clarins have changed the application brush...........which is now built like an arrow. The issue I now have is that I can hardly get any of the fix it mascara attached to the brush, its only attaches to either the point of the brush and this is very little or on the stick or it sticks to the other end of the brush, where you cannot place this part of the brush close to the lashes, but...... their is no coverage along the body of the brush. I have already returned one mascara to the shop due to lack of the fix-it attaching to the brush and after trying a few weeks without it, I have had to purchase a new one, as some is better than none, but (yes another but) I now have to use a throw away brush with a full bodied brush, which gets stored in a bag until the next use (which is daily, but still not ideal) and by doing this, it isn't making the product very cost effective, as I lose any fix-it left on the brush to the inside of the bag. I would love to hear anyone else's thoughts on this change of brush, am I doing anything wrong? Am I just being unlucky. However a friend of mine who I had converted to using the Fix it mascara has had the same problem and has returned hers to the shop.

I'm not sure why I haven't written a review for this product yet as I've bought it multiple times. This mascara was meant to make your mascara waterproof but I used it in the way to help prevent smudging. I always have problems with smudging mascara and I thought this item would be a great way to avoid it. Although it did not avoid it 100%, it did help a bit as it adds another layer of coating on top of the mascara. The mascara itself of in a white packaging and gold lid. It is smaller than a regular mascara tube. The wand has a regular mascara wand bristles. It is a clear gel that you apply over your mascara and/or eye brows to set it. I did not note any scent to the product and did not irritate my eyes. After I allow my mascara to dry, I apply a coat of this gel on to help seal the mascara. If you apply the gel too quickly following the mascara, the mascara would smudge onto the gel and eventually the clear mascara would turn black/grey, which has happened to be before. I'm not sure how well it makes mascaras waterproof as I have not used it for that purpose. I would repurchase this product for the use of sealing in mascara and help to avoid smudging. Although finding a mascara that doesn't smudge at all would be the goal. However, if you want to try this product, I'd suggest trying it out to see if it works. It's been getting great reviews and I think it is worth it.

This is supposed to make you mascara waterproof and completely seal it. I applied my mascara let it dry then I applied this on top a few times. The brush is too small. It did help a bit. When I got home I washed my face and my mascara came off with cleanser and washes off easily. When u apply this not much product is on the brush. See I usually use tube mascara when I have to but it's just too difficult to take off. I thought is would be a good alternative. My mascara smudged a bit after 4 hrs

If you need some extra staying power on your eyes (example: water sports) this is the product that will do the trick! Nice to have the option to turn regular mascarra into waterproof when needed

AMAZING - I bought this stuff by accident at the airport. I was shocked when I opened it to find a clear gel like mascara. But then... I curled my eyelashes as normal. Put on my YSL faux mascara, with a touch of this on top and MY GOODNESS does this stuff work!!! It held them in place all day, and I really mean ALL DAY. I have trialled and tested this in both the wet, windy London weather, and the sunny New York temperature and I can safely say it withstands all climates!! I have now actually stopped wearing mascara all together - what I do is curl my eyelashes and dab a bit of this at the root. It holds the curl in place perfectly so I have very natural looking long lashes. LASTLY, this also holds your eyebrows in place beautifully. I don't personally colour my eyebrows in but I have done my mothers and this worked a dream for her. I will brush through a bit of this to keep my long-haired eyebrows from falling down. Perfect, perfect, perfect. Sooo happy I found this.

I bought this because i wanted something under my regular mascara to hold the curl after i curl my lashes, as water based mascaras straighten them out. Well, doesn't help to hold the curl. Then i tried to use it for what it was meant for...It's not really good. It has a bad applicator, that makes the lashes stick together, a weird paraffin based formula, that leaves a grey cast. It says on the packaging that you can use it as an eyebrow gel. Well same problem, very visible on the brows and not holding anything. I rather go with Clarins truly waterproof Mascara, says what it does and dramatic