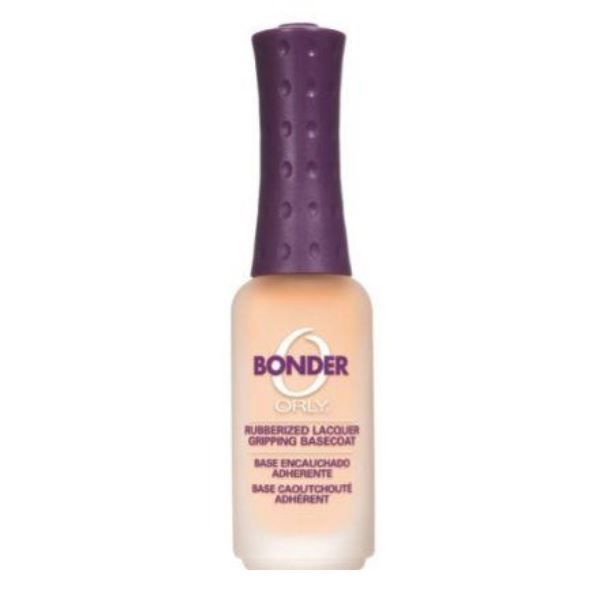 I've tried various basecoats and this is hands-down one of the best I have tried. This has a thicker texture and something about the &quot;rubber&quot; finish seems to bond the layers of polish and treatments much better than most bases. I will continue to purchase this, as this is one of the only basecoats that actually seems to work. This also prevents staining. The only (slight) drawback is that the thinner bottle and cap make it a little difficult to hold...but that's more than okay because this actually works! Give it a try if you're searching for a good basecoat that actually lengthens polish wear.

I've been using this for years, and I have yet to find anything better. It keeps my polish chip-free, and it lasts for many days. This has a thicker texture than other primers, but it's not noticeable under polish. This helps keep my nails from getting stained by dark polish as well. Fantastic product!

I've been using this for several months now and it's just not impressive. It has a very thin, watery texture and requires a few coats to smooth the nail OR be an effective base coat. I use two coats. I don't think it has improved the wear of my pedicures. So I wouldn't buy it again.

Great base coat! This rubberized base coat dries to a slightly tacky but matte finish and nail polish just sticks to it. Will definitely lengthen the wear time of any polish! My mom gave me her bottle which was a bit old and kind of thick. I bought a new bottle because I am always up to try something I haven't used before, and I was really happy with the results. When I run out (or the brush no longer picks up enough product), I will definitely be repurchasing this base coat!

I love having my nails painted but I work with animals so they would pretty much chip the day after painting them with the OPI base coat I had been using. This one is bulletproof. I can go almost two weeks with minimal to no chipping but I usually don’t because I like to switch it up. Rubberized is a good way to describe the texture of this product once it is dry. It seems to hold onto polish really well and keep it there. The brush is really wide and a little unruly and sometimes mine will come off the cap but nothing a dot of superglue won’t fix. Awesome product. Highly recommend and will repurchase.

I have purchased this many times and it is a holy grail base coat.

My favorite base coat so far, especially as it really does seem to make manicures last longer and prevent nail color from staining the nail... and the colors I favor are bright reds, vampy reds, and dark-almost-blacks, so this is saying something. I used to get really bad stains in my nails whenever I wore nail color, but this seems to keep it almost entirely at bay. However, the orange staining from the base coat itself, that other people here have mentioned, is definitely there. I’m lucky, though, in that that isn't a problem for me: my nails have a perpetual blue tint in the nail bed that almost looks like cyanosis (but it's not, they're like that even directly after an intense workout) and this actually corrects for some of that, especially if I use a light sheer &quot;My Nails But Better&quot; kind of polish over them. As for weakening the nails, I guess I haven't used this long enough to be a good judge of that. I will say, however, that after using this base coat for about a month, I'm actually able to have long-ish nails for the first time in my life... and the nails are even LESS prone to chipping and splitting and flaking than they used to be. This is the case even though I do a fair bit of cooking and cleaning and washing up at home, and often dispense with gloves out of laziness. I guess that might just be because I've been more aware of my nails since I've started giving myself regular manicures, and started using my hands in a way as to stress the nails less. I've also been applying cuticle oil regularly, which I didn't really do before. But I also think having to remove my polish less (because the manicure isn't getting destroyed on a regular basis, just wearing down a bit so touch-ups are all that's needed) and therefore having to handle acetone less frequently is also helping the strength of my nails a lot. I can go longer without having to expose my nails to the harsh chemicals, and that’s partly thanks to this base coat. I've noticed especially with Bonder that there isn't even a need to &quot;strip&quot; the nails with alcohol or acetone before applying the polish. I simply wipe off any residual oils with a cotton towel or a buffing cloth, and I believe this is also what helps my nails stay strong and flexible and flake-free from the inside out.

I will definitely buy when this runs out With this base coat, I've been able to get 6 days before a manicure deteriorates past minor tip wear. This is a record for me and the best success I've had with a base coat. The trick for me has been to use *two* coats of the bonder before moving on to the color. I typically do two coats of bonder, two coats of color, and a quick dry top coat (Sally Hansen Insta-Dri). Using this method, I've gotten 6 days of &quot;looking good&quot; with the following brands/types of polishe so far: Sally Hansen Insta-Dri, Wet n Wild 1 Step Wonder Gel, and Sinful Colors. I've gotten 5ish days with Wet n Wild MegaLast. I really like the rubbery cap on the bottle. For reference, I have thin, bendy nails usually just barely past the ends of my finger tips. I spend most of my workday typing. My regular tasks that are hardest on my nails are washing dishes, scrubbing at home, opening boxes, and changing sheets (for some reason).

I do my own manicures so often (roughly every 4-6 days) and I find myself leaning towards Orly Bonder often as my nails do not need any strengthening treatments since they’re pretty strong on their own. For staining, this won’t help to keep stains away. Since I keep my nails polished regularly and give myself some polish free nails from time to time, when I need a manicure to stay, this is what I love to use. Pro Tip: make sure your nails are clean from oils before starting any manicure as that keeps from having a long lasting manicure.

During the months leading up to my wedding, I had my nails done every two weeks at a salon. My nail tech used Orly Bonder, and the salon had a three-day no chip guarantee (or they'd do your nails again for free). The week of my wedding, I had my nails done on Tuesday and other than an accident when I scuffed my nail while attempting to close a window, my nails were still perfect by my wedding day on Saturday. However, I noticed that after two months of regular manicures, my nails started peeling and the nail beds started to turn yellow, which I attributed to the constant manicures. I stopped painting my nails and they're now back to normal, so I agree with the other reviewers who suggested alternating base coats. I'll keep Orly Bonder in my rotation, along with Butter London and Nails Inc. base coats.