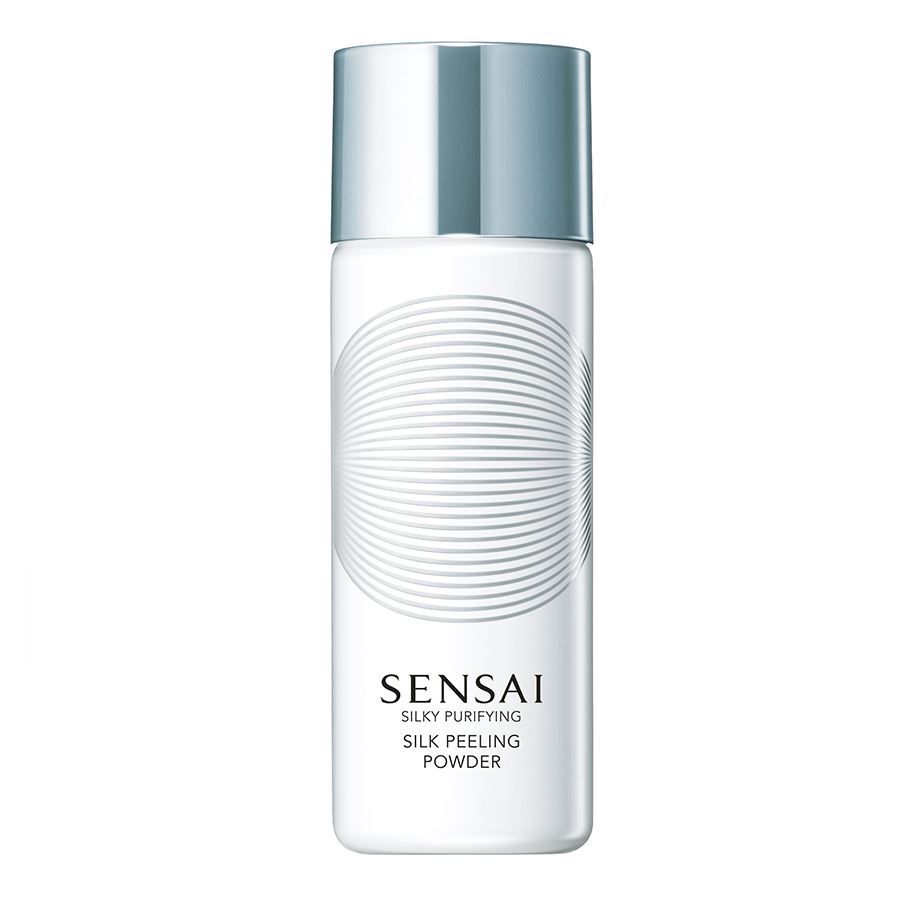 Love this! It's basically an enzyme washing powder (there are similar products out there, Dermalogica, Amore Pacific, Babor, Kanebo's Suisai etc. - but they are so-so compared to this baby, IME), Kanebo/Sensai advises that this one replaces their Step 2 wash on peel days in their double-cleanse program. Out of all the Step 2 products in the Silky Purifying line this one is my favorite. I've stuck to it through 3 or 4 reformulations/repackagings and Kanebo always manage to improve it, rather than do something stupid like make it less effective. Since it's an enzyme peel it eats away the dead skin, and I find it softens my comedones as well (only other thing that manages that is a BHA product) to a certain extent. It can be decievingly gentle, but using it too often or combining it with other exfoliators can result in raw skin. I made that mistake once and it was about as bad as frying skin with tretinoin. Other than that I also love the packing, the bottle has a built-in dispenser, you'll turn the bottle upside down - it's been "loaded" and then turn back up, unscrew and dispense the correct amount for a single application on wet hands. No waste, no guesswork. But it probably screws over people who want the bottle to last. This is a bit of a non-issue as I find one bottle lasts me 6 months of very frequent use (up to 3-4 times a week). The rest of use is easy as well, just foam it up a bit and apply on wet skin (after Silky Purifying Step 1 has been removed) and either leave it or massage in gentle, circular movements. A minute or two is all it takes. Then rinse. (It can be left for longer, or combined with their Sponge Chief cloth, but then it very well possible to hurt skin.) Results in glass-smooth, non-stripped skin. Last I checked it has a pH of around 6. So lower than soap or other Step 2 cleansers (those tend to be over 7, so they can produce the dense lather Japanese cleansing rituals require). There is a scent, I think, but it's certainly unobtrusive.

I bought the Silk powder after a local store used it on my inflamed acne face for a treatment. This product helps my skin so much I cant believe it, other products leave me red on the skin and irritated. I can only use it ones a week, if i use it to often it gets to harsh on my skin. Because of the cap I can never use to much and I feel that my skin is super soft and al the scabs are gone after the peel. The only thing that bugs me is the price, it goes for about 70 euros here, its a lot of money but it goes a long way when I use it ones a week. I would have never bought it if I did'nt tried it at the store first, so if you think about buying this kind of peel or spend this much money on a skincare product ask for a sample first. All skins are diffrent!

|t sure is silky, leaves the skin feeling a bit weird rather than peeled. Like you have washed your face with a really cheap soap and it s washed off any possible oils on your skin. The packaging is also not the most practical one. You pour the powder out and it is difficult to pour out the right amount. Should you pour too much onto your hand and it is damp, you can 't pour it back in because it would get stuck in the bottle. It is more like dry soap flakes than a good face scrub.

This is my third bottle and I'm not stopping any time soon! I have skin sensitive to mechanical peeling products - meaning I can't use anything that contains any sort of grains or granules because i get broken capillaries as soon as I do. Even a wet towel is sometimes too harsh. So when I tried this for the first time and it didn't do anything bad to my skin, I fell in love with it. As it is an enzyme product, you should leave it on for a few minutes. I usually use it in the shower while I wash my hair and scrub my body. By then my face is as smooth as a baby's... face and no broken capillaries! It is quite pricey here in Norway (about $70) but for me, it lasts about 9 months so it is worth it. I use it every 2-3 days.

It's hard to review this baby because it's a stealth fighter, like another reviewer said very accurately. I started using this around my 31st birthday, about 2 months ago. I use it about 3 times a week and my skin has cleared up considerably. The thing is I started using a few new products around that time so it's hard to tell which one I struck gold with, but the combination of them seems to be working a treat so am gonna keep using them all! So my regime now consists of the following: Morning: Avene's micellar lotion for cleansing, followed by MAC's charged water hydrating gel cream Evening: Avene's micellar lotion for cleansing and removing makeup, followed by Estee Lauder's Advanced Night Repair serum and Estee Lauder's Hydrationist moisturising lotion for combination/oily skin 3 times a week in the shower: Kanebo's silk peeling powder for exfoliating. Seriously, my skin has been pretty troubled since my early twenties but it has never looked this good. It's so good even I can dash out the door now with just a touch of blusher and not feel embarrassed! Never thought I'd see the day :) Don't be fooled by the fact that other reviewers call this a scrub, because it doesn't feel anything like a scrub. I was very disappointed when I first used this, based on the reviews I thought it would turn into a sort of rough paste that I could use to really polish my skin. Instead, it just turns into this creamy, lathered foam! Not the slightest hint of any grains in this, just silky foam, like the instructions actually say. Still, I was surprised and a bit let down. The feeling after using this is kind of weird, it feels like you are stripping your face, after rinsing it is LITERALLY (and I mean literally in the literal way) squeaky clean, you can actually hear it squeak if you rub it. I kind of thought that probably isn't a good thing since stripping my face of its natural oils tends to shock my oil glands into overcompensation mode. However, if I just towel off and moisturise after my face feels super soft. It's not like you see an immediate difference but yesterday my skin was looking and feeling a bit manky from eating too much junk food and not being outside enough, so I had a shower, used this powder, put on my ANR serum and Hydrationist moisturiser, went to bed, and woke up this morning with the few blemishes I had almost completely vanished and my face looking glowy and healthy. Yay! And what the other reviewers said about this lasting ages: I think that's true so it's not that bad value. I used it 3 times a week for the past 2 months and I've barely made a dent in it. Definitely recommended for gentle but seriously effective exfoliating, both for acne-prone girls like myself and for 30-something girls (like myself) ;) Edit 12 December 2012: Well, been using this for almost a year now and I ran out last week. Used it about 3 times a week, sometimes more. It's not like my skin is completely terrible again out of the blue, but I definitely feel like it was smoother when I hadn't ran out yet. It retails for about 60 euro in Europe, which is a lot, admittedly, but if you take into consideration that this lasted me about 10 months with very frequest use it's not bad. Gonna buy it again asap.

It is so far the best face cleaning products for me. It is very gentle but cleans my face excllently well. It's better than La Praire face cleaning products. Just a little bit can do the work, so the bottle can last more than 6 months...Great Product! Two years=One bottle, I would say it is cheap for me...

A definite HG for me in conjunction with my acne.org BP treatment, body shop face buffer and Neutrogena acne stress control moisurizer. Technically this is not a scrub but it actually is. I use it every other morning in the shower and just massage the "paste" into my face for a couple of minutes. My face has never been that clear and flake-free in my whole life. Honestly, I don't care what the price is if I get this kind of result on my face! BTW I've had it for a year and it still not anywhere near finished. So the price seems to be high but it's very cost effective :-)

This is My favourite skin product.. leaves my face squeacky clean without the irratation that most scrubs do to my face. It's a bit difficult to use at first but ones you get the hang of mixing it up you'll be addicted. I've tried numerous of products to brighten my dull, blemished skin and they've all have left my skin looking even more dull because their too harsh. This is just perfect. Does everything and leaves my skin looking healthier and brighter after cleansing with it. UPDATE; 7/11/2011 Baking soda! Yes. Mix it in with your cleanser and see for yourself. It works even better and is free compared to this.

I simply love this scrub:it is the only one that do NOT make my skin red.I am very sensitive and the ordinary scrubs with small beads inside are not mild enough : they do a mechanical scrub, too harsh for me.The Kanebo scrub instead performs a chemical peel that is really effective but very gentle at the same time.The best result is reached when you put a small amount into a little container ( or the palm of your hand if you don't have one), add with drops of cold water and then stir with a wet foundation brush.Apply the foamy mix on the face and neck with gentle brush stokes and then wash away with cold water.The skin will glow after this treatment.The best peeling ever seen!!!!

I really really really enjoyed using this product. It made my skin super soft, feel clean and brightened ot dramatically. It was given to me as a gift and a year later when I went to stock up was a bit surprised by the price, the powder is not cheap but lasted me an entire year so I definately re-purchased. A tip for those with oily skin, dont apply too much pressure to get that freshly scrubbed face feeling because even though the powder dissolves to a paste you can still cause burns.