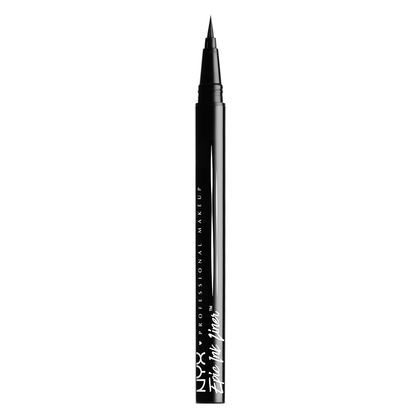 I have been using the physician formula eye booster pen liner for years, but noticed my last couple pens weren't as pigmented as the earlier ones. I decided to get NYX epic instead. I purchase both of the eyeliners in brown, and swatched side by side on my hand the NYX appears a bit lighter &amp; warmer next to the PF (but color looks identical on my eyes). I'm really impressed with the pigmentation &amp; wear on the NYX- I get a nice solid even line with one pass that lasts all day on my oily lids (I do use a primer underneath). The only problem is after a few weeks the pen started leaking on the side, and I need to blot it with a tissue before each use. I will probably still repurchase since I like the liner so much &amp; hope this is a fluke.

I grabbed this eyeliner for $9 at Ulta, looking for an easy liquid liner to work with. This one is fantastic. The tip is neither too stiff, nor too flexible. It can actually work to make fairly thin lines for those who do not want thick liner or huge wings. The eyeliner is very pigmented and not watery at all. It also held up without coming off at all over an average day of wear. I found this eyeliner very easy to work with and would even recommend it for those who are trying to learn how to use liquid liner. I would definitely repurchase this one.

I bought this since it was recommended to me by my friend saying it’s a good dupe to Kat Von D’s eyeliner. It’s very black and the tip is thin perfect to draw your line but it bleeds just a little and it’s quite permanent so if you’re a beginner, try using a pencil or tape since you only get one take with this. Also, be careful when putting back the cap. The brush tip once disfigured will remain that way.

I would give this a zero, if I can, based on performance. Bought this nyx epic eye liner in brown and it barely had any color. Looked grayish on my Asian skin. It’s not on point at end of the day, heck even at the beginning because you can’t really appreciate your eyes being highlighted with it. I had redness on eye at the end of the day. So if you have sensitive skin, I wouldn’t recommend this. Well, either way, not a really good eyeliner. Only one star for the brush tip because it was soft.

I really wanted to love this budget option as an alternative to KVD, because I prefer a brush tip to a felt tipped liner pen. I noticed the NYX pen was larger in circumference to the KVD pen, the brush tip was similar however. There isn’t much else to note with the packaging aside from noticing the lid was challenging. I had lots of issues with the lid not closing properly, which eventually led to this eyeliner drying out one day. The brush tip always accumulates an excess of product, you cannot store it lid down. Unfortunately at times when the lid would stick, I would have eyeliner splatters on my clothes or my face after opening it with a bit of force. It stained my clothing as was super frustrating. The formula of the product itself bothered my sensitive eyes, which I only noticed after I started losing a huge amount of my eyelashes and had swelling by the lash line. It didn’t itch or burn upon application so I didn’t notice right away. The pigmentation was nice and black, and had a nice satin finish. Also, while the liner had awesome lasting power I found it very watery. I struggled to get a sharp wing most days because the eyeliner would run or excess product would come off of the brush. I would not buy again. The issues with the brush, the runny formula, and the sticky lid was very annoying to deal with. It’s unfortunate, but I’m still looking for an alternative to my KVD pen.

This is definitely one of the better drugstore liquid liners that come in pen form, it isn't too firm or soft and its really quick and easy to line the eyes and do winged liner. I have brown and black and both are pigmented enough that one run through is enough. I don't set my undereye concealer with powder and I notice no smudges or raccoon eyes. I knocked a lippie off because after a couple of months when it's getting close to replacement time the liner gets really thin and wonky. It will start to leak out in bubbles and the tip separates making it really precarious to apply. I keep experimenting with other drugstore liners and their overall performance does not match Epic Ink when it's in it's prime so I will continue to repurchase regardless.

I have given this chance after chance, blaming everything beside this liner. Issa no from me. It bleeds, and its watery. Making it difficult to work with. I'm walking around with black ink bleeding into my eyes like I'm some sort of demon...this is not the look I was going for. The packaging is lovely, brush tip is lovely...it has potential but the formula...that'll need reworking ...please

This is definitely an epic failure. There is no consistence of the product, the ink is so liquid that it bled into my eye. My eyesight git blurred because of the black ink and I had to clean this mess. Plus the line I draw completely watered and smudged all over the eyelid. Never a repurchase. I was thinking that the balm 's swing eyeliner was runny but this is totally a disaster.

It does not skip or smudge and draws a beautiful clean line. I purchased it in brown because my favorite Pat McGrath liquid liner does not come in brown and I wanted to try an inexpensive liquid liner. My only complaint and it is is a big one- is it this does not last more than a few hours on me before it wears off completely. If only there were a way to make it last it would be my new HG liquid liner!

I was super excited for this eyeliner but it fell so short. First of all, let's talk about how badly this eyeliner bleeds. You swipe it on your lid and it expands to double the size and looks super messy. If you use the VERY tip, you can almost get a nice clean line, but it still spreads and migrates all over the place. Second of all, when you open the lid, usually theres a pool of product on the applicator that you have to wipe off before you can even start. Needless to say, i wont be buying this again.