MAKE UP FOR EVER 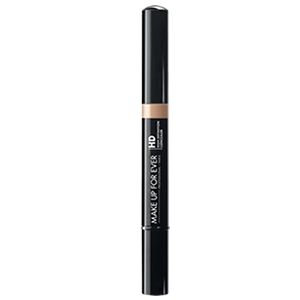 135 reviews
60%would repurchase
2.8/5package quality
price range
Write Review
More reviews, photos and discussions for MAKE UP FOR EVER

This concealer is not bad, it is just hard to work with and not impressive. I find the range caters towards pink undertones, perhaps they all have a salmon undertone because they are meant to be used under the eyes and counteract dark circles. This does not work at all for on the face though as the color is all wrong and it is not pigmented and blendable enough for it to cover blemishes. It is ok under the eyes but does not brighten much, I prefer a yellow undertone concealer for that purpose. The texture is not runny, it is creamy and pleasant but it does crease under the eyes even if set with a powder. I would not recommend or repurchase, you may find better than this one.

So my review is for the one that comes in the tube, just for reference! I really like the color (I use R20 and am NC15) for my skintone, but I just can't get over the texture of this concealer. It's runny, thin, impossible to blend and ultimately doesn't offer enough coverage for me. Also, I just wanna point out that the only thing HD about this concealer is my milia after it's applied. No and thank you.

I guess I am not a fan of this type of concealer applicator. I feel like it creates a big smear that is stubborn and requires another tool (or finger) to move into the right place, which is annoying. I prefer a concealer stick. Also, it is very thick for full coverage. Except for specific occasions, I would not need this thick of coverage.... so it is more of a special occasion concealer for full glam makeup with heavy coverage foundation. When used with my daily (pretty sheer) tinted moisturizer, this is too heavy.

I would buy this as my concealer but wasn't happy when it would finish so quickly and yet it's so expensive. There are products that are just as good and cost less...AND last longer!

My go-to concealer! I keep repurchasing in spite of the high price tag because you get what you pay for. I love the natural effect of this concealer: it looks like real skin with a luminous finish but it's able to cover new mom dark circles like a champ! The vast shade choice helps.

Having just turned 26 - I have literally JUST found my perfect concealer after looking around for literally, years. I was almost resigned to the fact that concealers maybe just weren't for me. I'm dark-skinned (MAC 40/45) and have dark circles + being constantly behind spectacles have really sunken my eyes in. I've tested out MAC and Revlon of which both were terribly cakey and washed out my eyes (read: ashy ugh). Was recommended the MUFE HD concealer by the Sephora SA on a quiet Sunday night and I was careful not to be duped or buy anything out of feeling bad for wasting the SA's time (did that with my MAC prep+prime highlighter pen). The SA did a great job concealing my circles while dabbing translucent powder over - I was sold. I LOVE using this concealer because its amazingly sheer + full coverage, i mean if that isn't the goal of life, i don't know what is! It's so blendable, the opposite of cakey, sheer, luminous and pure magic! I would say it reminds me of a tinted moisturiser - like Nars' Pure Radiant TM. The only downside besides price of cos - the packaging. I don't understand why many brands insist on this pen/twist thing because you can twist all you want, the product takes awhile to get activated and comes out more than needed. Any &quot;extra&quot; product on the tip becomes dry and cakey which is such a waste! However I have to say the &quot;plastic&quot; tip on this pen is so much better and more hygienic than Mac's &quot;brush tip&quot; - so kudos on being thoughtful on this! Overall - I'm STOKED to have finally found something that works for me, would totally be repurchasing!

I purchased this concealer after seeing it featured quite often on The Daily Face blog. I usually don't make purchases like this, all those fancy MUFE and MACs are nice and all, but I am so low-maintenance, and that price-tag just doesn't sit well with me. But I went for it, because my dark under-eye circles have yet to be tamed by concealers, and I just had to see what all the hype was about. I have been using this product for.. Months, now. Maybe even a good year or so, I've lost track of time. I have been repurchasing it, even though the applicator is an absolute mess, and even though it doesn't last very long. See, I'm simple like that — I was just automatically repurchasing it. Then I ran out of it again, and I thought, &quot;Gee, this is really draining my bank account here. This tiny little concealer pen is clearly not working well enough so that I wouldn't be wasting all of it, and it's hella expensive&quot;. So I went online and started looking at reviews. Sadly, I'm still at a loss — I don't tend to have the puffy &quot;bags&quot;, and I think... This is gonna sound weird, but I think that my under-eye circles are different than others'. My severely dry skin makes it so that it's almost like my entire eye turns slightly brown, and my entire face looks more pale, but it looks quite different from others', as far as I've seen. Maybe I was just raised to think I'm special :D Anyway, am I going to repurchase this? No, I'd much rather take on a little quest to find something that's truly worth my time and my repurchasing. For those of you who are still wondering if you should get it, I'll explain the product, so you could make the best possible decision: * If you've never used it before, the first thing you're going to feel when you open it is ANGER and HATE. That's totally normal, that's due to the stupid silicone applicator. You do get used to it, and it slowly turns into a love-hate relationship with lots of sighs and eye-rolling. Hurray. * Yes, it does dispense too much, but I've seen geniuses here say they've figured out that you need to turn it only until it clicks the one time, and then squeeze the silicone tube thingy until what's in it comes out — I was never this smart about mine, so learn from them and do that, or don't purchase this because I'm pretty sure MUFE is laughing hysterically at all of us right now from some ivory tower somewhere. * The color blending is very good. It is quite sheer, so if you're looking for a very full coverage, move it along, sister/brother. The sheerness of it actually works alright in a way that makes you not look like &quot;I HAVEN'T SLEPT IN DAYS AND I MUST STAY AWAKE AHHHHH&quot;, you know, how some people look when they're wearing cakey concealers. This just doesn't have that option, I've found, which is good, because ain't nobody got time for being really good at applying concealers (yes, I'm quite lazy in the morning). * I can't say much about creases, because I'm.. Well, I'm 25 and don't really have anywhere for this to crease. I also have dry skin, so maybe that's part of it, I don't know. Sorry for not being of better help in that department. * I am 325, light skin, and it blends beautifully, even when I'm tan. When I'm really tan, I just blend it more, kinda, if that makes sense. It's very sheer, as I've mentioned, so whichever tone you are, it's pretty much bound to blend well — the only question is, how well did you want it to blend, really? I mean, you wanted it to conceal. I dunno. * The texture is nice, it's really not thick, so blending is easy. DID I MENTION BLENDING? I FEEL LIKE I NEED TO MENTION BLENDING SOME MORE. :) K, yeah, I feel like that's all I've got. I loved you, MUFE concealer, but it's time for me to find a new friend. Goodbye for now, old friend.

For the price in Sydney, I would not consider repurchasing this concealer. The packaging completely ruined the overall product for me. Even though the concealer itself wasn't a problem, the small tube would leave product sitting in it and the concealer would dry up. I ended up wasting so much product, it was extremely frustrating and not worth the effort nor price tag ($43).

This is the perfect highlighting concealer. I bought this in the lightest shade and it's perfect for concealing and highlighting my dark circles. The consistency is really thin, it's nice and blendable, doesn't crease or wear off. The only problem I have with this is that I'm not really into the packaging since it's hard to get the right amount of product out of this.

My mom gave this to me because it did not work for her. Its an alright concealer, not heavy duty or anything like that. Its pretty light, but I don't use it under my eyes. (Rimmel MP for that) It covers blemishes fine and doesn't accentuate the spot, it just nicely lays over it. However, it doesn't last a whole school day. Not really an issue though, since its easily touched up. Overall, its alright. I just use it as my concealer I have ready in my backpack or bag.