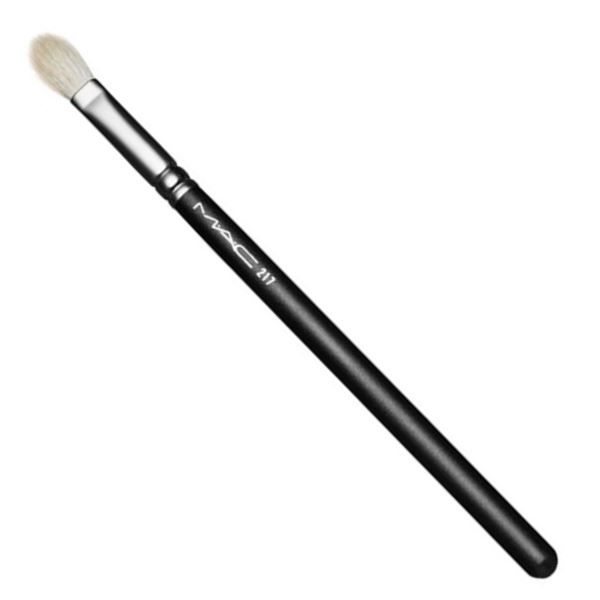 This brush used to be holy grail, then I discovered Hakuhodo! Especially after MAC made a poor decision to go synthetic. I will not purchase.

One of my favorites and use it almost every day.

I have been a professional makeup artist for 6+ years and this is the best I have come across to date. I have tried many eyeshadow blending brushes, however, I always end up going back to this - Also a big fan of the #221 and #224 also by MAC Cosmetics. Always have ample amounts of these brushes in my kit.

I have two MAC 217's, they are over 5 years old and they are in excellent condition. They perform beautifully after all these years of near-daily use and countless cleanings. The are not scratchy and they don't irritate my highly allergic, very sensitive eyes. I use a very gentle , non-alxohol, fragrance free cleaner; sometimes ill dry them with a brush cover on to keep their shape, but I've let them just plain air-dry (no shape-covers) and they have kept their shapes and textures perfectly. They pick up product beautifully, handle beautifully, and when I am on autopilot these are what end up in my hands. Am a makeup brush hoarder (it's an illness ????????). I've had to try many different brands and types due to extreme eye sensitivity.. and due to performance issues. I've tried all sorts of dupes for the 217, thinking that if I found the perfect dupe I would save wear &amp; tear on my 217s and have them forever primo! I bought 3 Coastal scents dupes 3 years ago, and they were phenomenal in shape, texture and performance-- when I ordered more for gifts, the CS brushes were cut very poorly and couldn't even perform. Haphazard batches I guess. I have 4 dupes by Crown Brush, which are cut well, have a wonderful texture &amp; perform well--but they aren't the exact shape of the 217, which always does me right! The Crown Syntho line is excellent. But, the MAC 217 reigns supreme as my FAV eye brush! A guaranteed performer! Am heartbroken these have been discontinued! Yes, they are too expensive. But they are an investment. If eye makeup is your thing, these are WORTH every penny.

When I first set out to buy nice brushes, I was recommended the Hakuhodo J5523 as an upgrade to the 217 or the sigma e25. I bought a few Hakuhodo brushes and used them all the time, but the 5523 was scratchy on my hypersensitive eyelids. I thought the 217 would be even worse, so I didn't bother trying it until I needed something that shape in my travel kit. I bought the 217SH (Short Handle) and I was amazed at how *not scratchy* it was! So the next time I had a MAC code, I bought the full length version, and again, much softer than my 5523. Since then, I've put the 5523 in my backup drawer and switched to the 217. I feel like MAC gets a bad rap much more than they should, because I love so much from the line, and this brush is a perfect example of how MAC is unjustly maligned these days. Update- this review is for the natural hair version. Since MAC switched to synthetic, I have not tried that version, nor do I intend to. I have multiples of the natural hair version, though, and still love them. Oh, and for the record, MAC's goat hair brushes were made in Japan, not China or Bangladesh, but I do believe the synthetics are from China. If you need a substitute for the natural hair 217, I recommend the Wayne Goss 18, or if you really want a treat, the Sonia G Worker One or Worker Two brushes are like a luxe version of the 217.

Buy it! Having the right brushes really transforms your makeup look and you can blend to perfection. My brush has lasted me a whole year. It picks up a good amount of product. This is my go to brush and to be honest is really the only brush I use. Yes I understand that investing in this brush can leave you questioning to buy it but I do recommend. The reason I gave a lower packaging score is due to it being given in a plastic wrapper and not a box or something, but then again it is a brush. So if you are pondering, take it from me and buy it. Plus I love cleaning it because it goes really poofy.

No no and one more time NO!. the time when Mac was very good brand ..is gone :( Since last few years Mac is more open for &quot;normal-everyday make-up people and I have notices that all products are made for quantity not for quality Foundations, blushes, powders, lipsticks, highlithers and brushes are worst than 10 years ago. This brish is my biggest mistake! Hair is rough and scratches the eye,after wasching brush has distorted hair overall. Later I have checked where is that produced....I dont remember good but in China or Bangladesh. For almost 30euro you will receive weak product which is worth probably 3 $ I have bought it at Mac store in Holland so my brush is for sure original Welcom in corporation world!

This brush is a true workhorse. I have hooded eyes, so I do buff my crease out and up quite a bit. The famous 217 blends like a dream and never feels stiff or stratchy. I have had mine for at least seven or eight years, and after multiple washings it still holds up, doesn't shed, and dries without the bristles being flayed. The handle and the ferrule are still in good condition as well with just the numbers worn off. I am glad that I purchased this, but if something happened to this one I'd pick up a dupe since MAC is no longer considered cruelty free.

Great quality, have used this for years. Cool tool for my everyday makeup routine. My handy makeup buddy!

I have loved this brush ever since I used it a few months ago! It blends eyeshadow so smoothly! It is so soft! I clean mine with a fragrance-free soap and it's just like new! This is a must have brush for me.