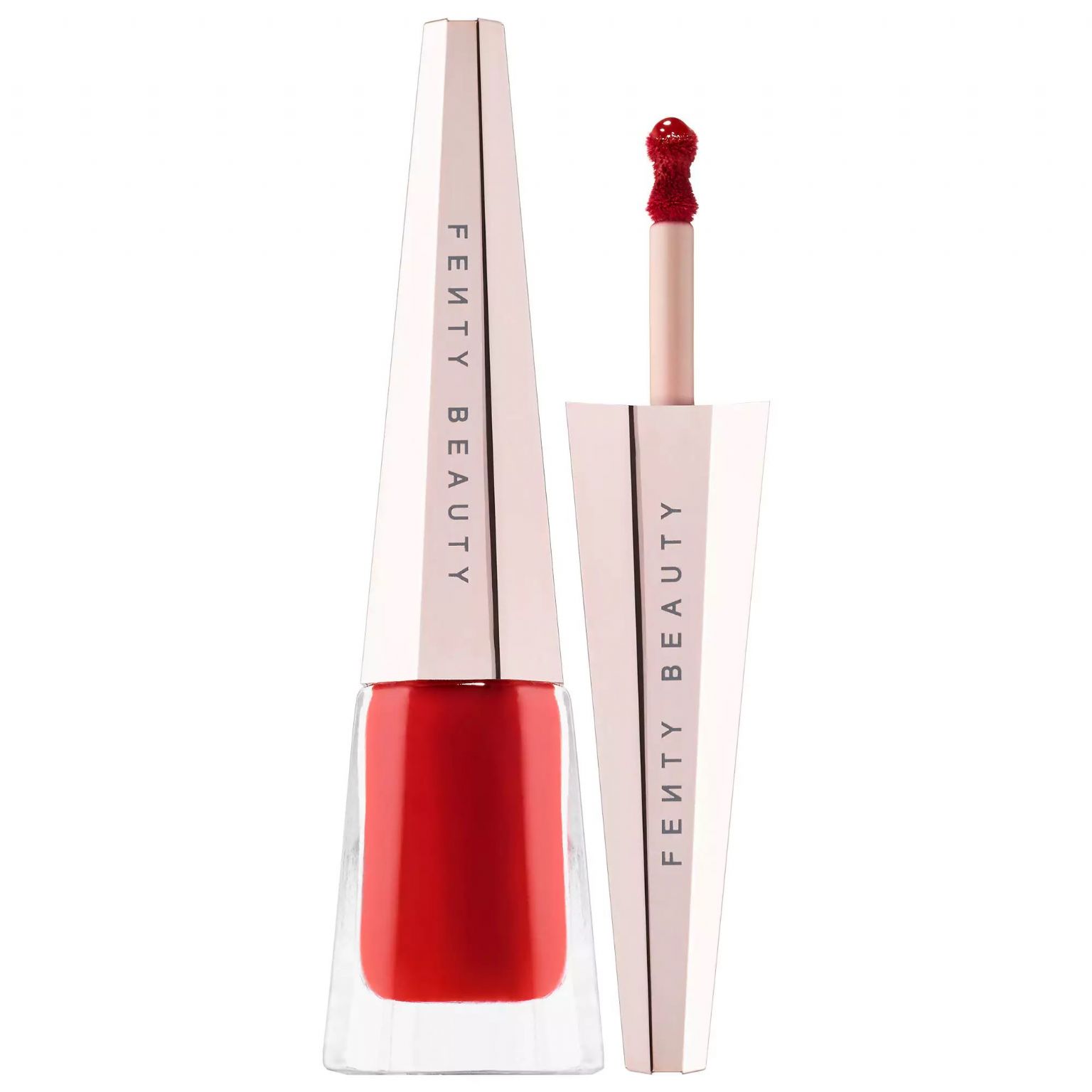 Hands down the best liquid lipstick and the best true red colour I've ever used. For a liquid lipstick formula to feel so smooth and nourishing while still pulling off a fantastic matte finish is mental to me. And the color, which really does work for everyone, is perfect to top off almost any look for day or night. 100% am definitely buying this again. The only suggestion is to go easy on the application because although the wand if a great size and shape, it does pick up A LOT of product which can be a little daunting at first, especially if you're not as stable in putting on perfectly shaped lipstick.

Foundation shade references: MUFE Y425,MAC C6 and Matchmaster, NARS Syracuse, Fenty Profiltr' 300 usually mixed with either 320, or a very slight 360 to get the right undertone without it being too dark or light. When I heard about Rihanna's uber inclusive Fenty Beauty line coming out with this, I was eyeing this big time. I looked at a bunch of people recommending this on youtube, along with the several swatches on both models and Instagram brown girls (the mistake I made was not asking people about things in the comments). I figured my struggles as a Brown girl on the prowl for the Perfect True Red was finally over, since my biggest fears for a red lippie are usually that it's too bright and orange, and this shade looked pretty deep, even on Rihanna who is a shade or 2 darker than me usually. Around this time, I struggled to figure out my undertones since I leaned towards cooler shades and looked really good in those rather than warm shades according to most people I've spoken to, but at the same time, I was told that my skin is quite golden or yellowish. I only used dark colours, berries or purples (both warm and cool), so my best guess was that I was Neutral-cool, or just neutral, and thus a lipstick that's a 'Neutral Red' would be highly likely suit me according to 'theory'. The only other red I tried out before this was MAC's Retro Matte Liquid Lipstick in 'Fashion Legacy', which was very clownish and bright orange on me. When I finally got to wear this lipstick, I was trying my best to not freak out because somehow, wearing this made all my discoloration pop up and my chin look greyish and much darker than the rest of my face. It made me hyper aware of all of the flaws on my face and was somehow worse than what I remembered Fashion Legacy was on me, and this made no sense to me because everywhere online this lipstick shade is known to be a 'neutral'. I took some pictures with this on and it also ended up looking alarmingly different on camera (the orange was toned down, but it was still a bright red) than in reality (bright orange red). I spent many a days putting this on and just sitting at home with this on, but even after 8 months went by, I couldn't warm up to this shade. If I lived near the Sephora this was purchased from, I'd have returned this for anything else, as this felt like a total waste of $22. Why bother with something so expensive when you'd constantly need to tweak the colour with liner, a darker shade or gloss? I also ended up asking several Instagram users around my shade about how the shade is so different on everyone, and I started ti hear more and more that most people wear this with liner, or use a filter to make this look different. That's when I REALLY felt like my money had gone to waste. Never again am I purchasing anything that claims to be a perfect fit for everyone, at least not without asking people around my shade/undertone a bunch of questions regarding the product. Since this lipstick, I also realized how amazing drugstore lippies are, and I reccomend anyone with an undertone or shade finding struggle to experiment with those first, before trusting online influencers, campaign or Instagram pictures. Any brand claiming inclusivity should really stop manipulating colors of their products with filters or additional products. After a year and several red lipsticks later, I found a variety of reds that suit me, including a True Red like Stila's Beso, which might be bright for many, but this type of brightness actually makes my skin look brighter and thus is my ultimate Bright Red that isn't too jarring. Then there's Maybelline Superstay Matte Ink 'Pioneer', which is more-so a Cool red but extremely flattering. Smashbox Always On Liquid Lipsticks in 'Baswe' and 'Disorderly', Colourpop Creme LUX Lipstick in 'Liquid Courage', Wet n Wild 'Spotlight Red' (another bright shade, but it's a cool bright red), Wet n Wild Liquid Lipstick in 'Missy and Fierce', NYX Suede Cream Liquid Lipsticks in 'Cherry Skies' and 'Kitten Heels', MAC Matte Lipstick in 'Russian Red' and MAC Amplified in 'Dubonnet'. Some Limited Edition Colourpop Lipsticks that get me a lot of compliments are The Colourpopx Kathleen Lights collab Ultra Satin Liquid Lip 'Lucky Star', and the Becky G one called, 'Besame'.

I have it with pinkish nude shade I truly love it great collection ???? long lasting and so light on the lips . It also keep the lips soft will not let it chapped. I highly recommend this to all

I have this in the shade Uncensored (Red). This liquid lipstick has a very light texture and doesn’t feel heavy on the lips. One swipe is enough for fully opaque coverage. It dries down and becomes matte fairly quickly. It doesn’t feel overly drying on the lips, but is definitely not hydrating. It doesn’t emphasise lip lines or bleed throughout the day either. It does transfer, but also somehow never seems to lose it’s opacity. It still looks great after eating or drinking. The doe-foot applicator is quite large, but this is a pro for me as I have full lips. I can see it being difficult for those with thinner lips to use neatly however. I do believe the colour would be ‘universally flattering’, it has looked amazing on all the skin tones I have seen it tried on. I like the formula enough to repurchase and to try out other shades too.

I bought UNCUFFED, my first fenty's Lip Paint. The color is really nice on my MAC SFF NC 40 skin tone and i do agree that this color is universally flattering. Really nice color for everyday wear. However, i don't think there's anything special about the formula. It is alright and does not dry my lips but that's about it. It doesn't last that long on me and could be a bit messy/bleed a little. For the price, there are better quality lipstick out there. Also, the packaging is nice but for a liquid lipstick i don't like it. I prefer my other simple compact cylinder shape liquid lipstick. This one is too big. But that's just me. So overall, its okay but nothing of a wow factor and i shall move on to try other brands liquid lipstick.

NW15 review of uncuffed and unbuttoned. I passed on the “universal red” due fellow friendly Sephora shoppers’ advice: a suspected reformulation since adding new colors seems to be superior to the red? Idk if true but I have many other reds. I settled on the peach (unbutton) and mauve (uncuff). When I tried on unbutton (lightest), I had on almost a black-maroon lipstick and put it right over top. It is super thin (I shake it). In one thin coat, it covered the blood-black-red with 100% opacity. Stunnas always darken on me as they dry down FYI, which takes a about a minute. Unbutton: my cool pink nw15 skin doesn’t look right with it dried - it’s like a very unflattering mid-brown on me. Tooth yellowing totally. I didn’t return as it makes an okay base for MAC goldfinch lipglass, but wouldn’t repurchase. The mauve(uncuff) tho. Be still my heart. 4eva repurchase. To explain how I feel about uncuffed: I own every color shade format etc in the hundreds and wore only this daily for MONTHS. I’ve never ever done that. I apply in am once, then maybe gloss top off throughout day. It doesn’t go in my purse cuz 1 daily application is all I need, it’s bulky, and gets staining product all over it with heavy use. I have smoked since 14 &amp; I’m 40 (so vertical lip lines/feathering worry me) and I slightly overline and perfect lips with this unique applicator (no lipliner), making my Cupid’s bow so extra. Uncuffed is *made* for the pale, cool-toned pinkish skinned person with pigmented lips (MLBB and Bigger). This formula is truly unique. It’s like opaque water. It’s SO unlike those maybelline dry matte ink things that you can rub butter over and won’t move; this may move (esp when glossed) so be careful. But it doesn’t feather at all! Don’t kiss someone unless they want to be a fellow stunna. Less drying than any like it but nothing dries my lips cuz I really take care of them. Competitors’ (stila etc) versions of long wear liquid lips just look bad after a (short) while and crack or sumthin weird. STUNNA no. Try-on in store is essential since the site pictures aren’t accurate at all IMO (unbutton is not that nude/light - it’s a stunning contrast on darkest skinned model in pic but it is not that pale of a peach it’s warm brown). I see they added more colors! YAY! Hot pink one I’m a comin’.

I don't know if I really repurchase this shade again, I just in love with it????????????. The packaging so pretty and made from glass, the tube like nail paint. it doesn't smell any strong things, but the formula are excellent. Just applicates a dot on lips, it works on all lips above and below. That's why I ready for another unbutton, unattached, uninvited, underrated etc.

Just got &quot;UNBUTTON&quot; yesterday and has been using it for 6 hours. Pros: 1. Packaging looks nice and heavy (glass bottle) although applicator feels cheap to me (looks like metal but feels like plastic) 2. Good color on various skin tones 3. Looks great under natural light and camera; has a blurring effect to it 4. Stays long and doesn't need constant reapplication 5. Looks tidy when dry. Does not require lip liner 6. Kiss proof after drying for 10 minutes 7. Lasts through eating, specifically greasy food Cons: 1. Product is too liquidy; difficult to apply and tends to skip when you try to perfect the lip shape and it's not dry yet 2. Takes long for it to be completely dry (around 2-3 minutes) 3. Applicator shape doesn't necessarily make it easier to apply the liquid 4. Somehow feels drying on my lips 5. Expensive price 6. Can get a better dupe

I cannot tell if i love this or I'm buying into the hype but i do like this. I like that its not a terrible feeling on my lips and lasts forever. It is not totally dry and has slip, itll literally stay on past shower and into bed and next day. I got the RED, uncensored? The &quot;universal flattering red&quot; and i have medium skin tone. It is NICE dont get me wrong, just not sure its amazing omg red. Ive felt the same with Russian Red from MAC and that Dior one thats supposed to be best red ever and a Loreal one used on Mad Men. I think Red will always be bold to wear and plays into beauty addicts concept of this show stopping red lip. Soo, because ive over analyzed this, i do not know if its truly an amazing Red or just a normal wow pop anyway red. The formula is wonderful. I do like it. Try it first in store is my recommendation.