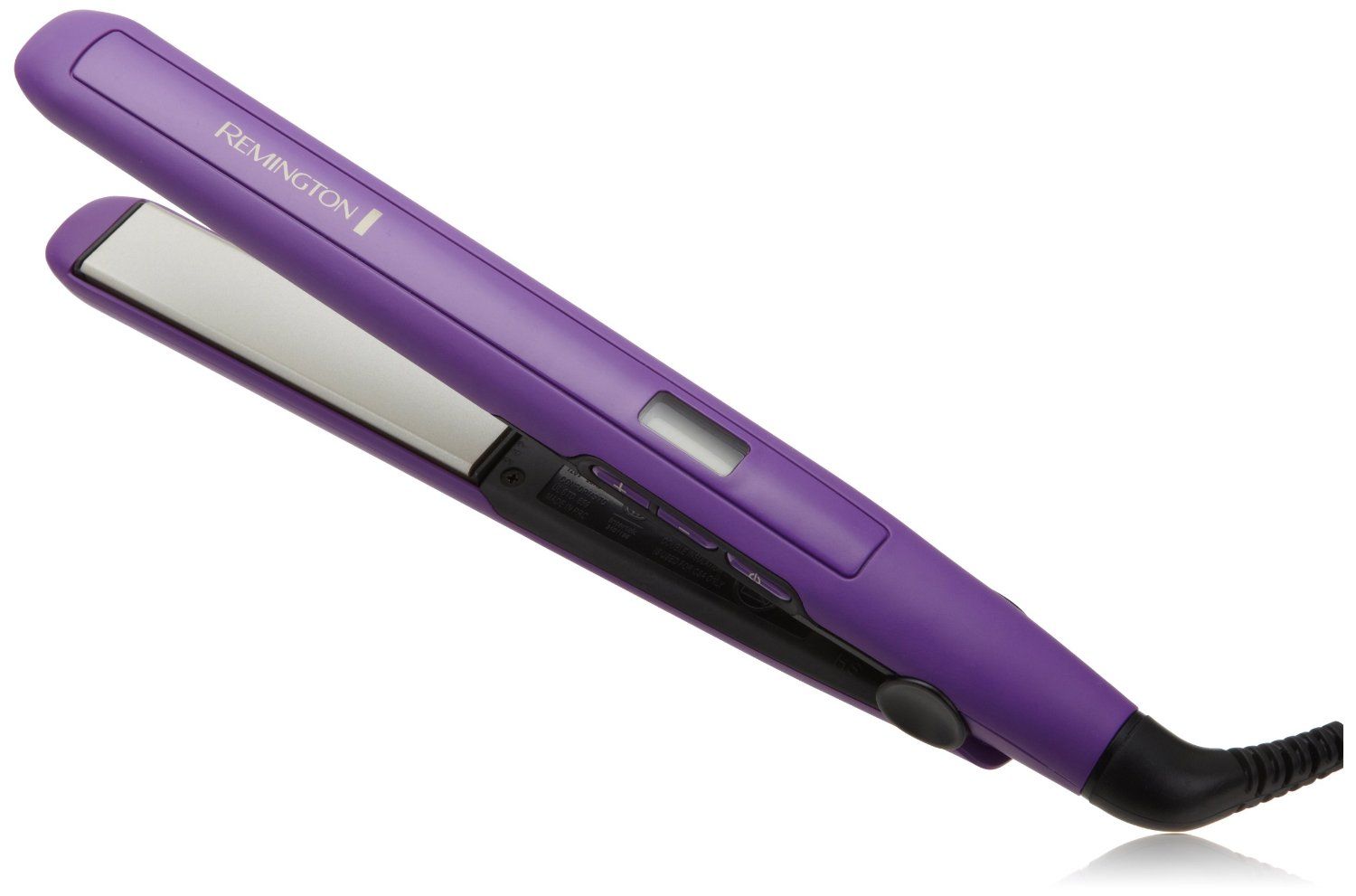 I use the gray one with the orange prongs. It looks better than the one in the picture and honestly, at this price, you have nothing to lose. I have used CHI, Conair, Hot Tools, Helen of Troy and many others but this is certainly one of the best in the market. I bought it based on the high ratings at Target website and people were not lying. This is a good quality product at a fraction of the price. It does the job done in one pass. It provides clear instructions regarding type of hair and level of heat. It is awesome. Highly recommended!

I purchased a chi thinking I should upgrade from this $20 straightener that I've had for 4 years, plus they were on sale on qvc. After using the chi for about two weeks I realized how great my cheapo Remington was. I ended up returning the chi in favor of this and I'll continue to use it till it dies and then I will buy another one. For $20 this is a great flat iron, it heats up fast and glides through my hair unlike the chi. It also curls my hair really well, which the chi didn't really do. The plates are nice and long and I like the little display and buttons to adjust the temp. So far this is my favourite one that I have tried. Super cheap and it works really well.

I have hair that is thick, not coarse, not fine, with a loose curl to it (only small color treated sections). I'm not too picky about my straighteners. This one was a bad option for me. I've used higher end products like CHI and HAI straighteners, they've been great. I've used mid range products like Enzo Milano and GVP, pretty good too. I've used cheap straighteners like jilbere and conair. Now I've tried this Remington straightener. I was not impressed. I used it in the morning on hair washed the night before and sir dried. I set the Remington at the typical temperature that I've seen good results with when using other straighteners and not much happened. I had to go over the section of hair 3 times. I then tried smaller sections, had to go over it twice and noticed some creases when lightly curling the ends under. I increased the heat and still experienced the same problems. I did all of my hair going over each very small section twice and then had to retouch the top layers to tame flyaways and try to fix done creasing at the ends. This appliance did not stand up to any others I've tried and was overall very disappointing. The best feature is its lovely purple color.

I LOVE this little gadget. I had seen it in target and looked it up for a while, being skeptical of such an inexpensive straightener, before I ended up getting it. So many people were saying it was better than their chi's! I had to get it. I'd tried out the remington pearl one, which costs about $40, and it did a great job. I'm in love with this one. It glides through my hair, leaving it shiny and smooth. It somehow straightens my hair so fast, way faster than my old conair nano silver ($50), at a much lower temperature whereas what I used to get for 395 degrees I can get at 350, so I don't feel as apprehensive about damaging my hair. I love the hinge lock where you can keep it closed. The slightly rounded barrel makes it nice for flat iron curls, creating a nice loose wave. CONS however, it does have a melting plastic-type smell the first couple of times you use it, but it doesn't transfer to your hair and is not too offensive. Also, maybe mine is slightly defective, but mine heats up much slower than it should (claims 30 seconds, takes over a minute). Maybe it'll grow out of that, because I have only used it a few times. And it has a slightly cheap feel to the plastic, so I feel like I need to be careful not to drop it. Lastly, the plates don't meet 100% together when I squeeze, but I don't think this really makes a difference. It is a $15-$20 straightener, so minor defects are somewhat to be expected. But the performance is outstanding. It's an amazing deal and a great straightener.

How does this beautiful piece of technology not have reviews yet?! I've owned a couple of straighteners, and they all left my hair damaged. I know this comes with the territory, but I only used them on occasion, or when I cut my hair. One never seemed to get hot enough, and one got WAY too hot. One pulled my hair out because my strands would get caught between the plates and the back of the handle. Ouch! Not good. The first thing that caught my eye was the digital temperature control. I have this on my curling iron, and that was a feature I loved! This heats up fast, and I can finally have STRAIGHT, shiny hair. My hair never got as straight as it does with this! My former flat iron, that was way too hot, was more expensive than the S5500, and it sucked. I can run my hair through one time, and that's it. I don't have to repeat steps until it's straight, so it saves my hair from some damage. My hair does not get caught in it either! Finally! Cutting my hair is a faster process too, because straightening goes by so much faster. This is the best, affordable straightener you'll find, period.