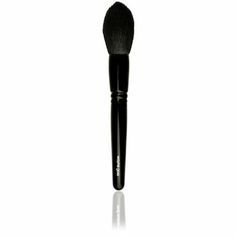 This is the powder brush I've been looking for my whole life. Incredibley soft but still dense enough to deposit product. I use it for blot powder and bronzer. It's seriously the most luxurious feeling brush on my face. I carry it with me everywhere. I bought this and the Wayne goss brush set and am so incredibly happy with my purchases. Worth the price.

So this brush is not a limited edition anymore, its the number 00 and is available all year long. Very soft brush and very versatile. its the perfect size for powdering your face, the 02 is the most amazing brush ever, but its too small for all over powdering coz it will take you a long time to do it. if you don't want to splurge - you can stick to any good trusty powder brush.

I've been debating whether to buy this since last year and I thought if it's still available at this late time I will purchase one since my Trish McAvoy brush of 15 years (similar style) is finally starting to disintegrate. It arrived today and with much anticipation did not disappoint at all!!! it is the silkiest, softest brush I now own and I've had quite a few high-end ones including Chanel &amp; Bobbi brown (although I still do love my Bobbi Brown &quot;full coverage face&quot; brush). If you're on the edge of purchase/don't purchase I say definitely, definitely buy this!

I have removed my previous review as I feel this brush, while soft, is really nothing more than soft pretty accessory, I washed the brush for the first time today and the dye came running out allover the sink. I have NEVER seen this happen with ANY brush and know that I have been a professional make up artist for almost thirty five years. I do like his no. 2, 11 and the little push brush. I will be sticking with my Shu Uemura and Hakuhodo from now on. Sorry to be a bummer and I seem to be the only one who feels this way.

I love this brush by Wayne Goss. It's perfect for powders, bronzers, and highlighting. Will be purchasing his makeup brush sets soon.

I don't normally write reviews on this site, but I do read them all the time. However, I felt that I had to write a review for this brush, as, in my opinion, the other reviews of it are overly harsh and unfair. I LOVE beautiful high-end luxury make-up brushes. I have an addiction (no joke!) to them and other make-up generally. As a result of this I own quite a collection (far more than I will ever need) and so can write with some experience on this brush compared to others. Firstly, while it is expensive, it is also EXCEPTIONALLY good value for money. To get a brush of this size and quality from another brand will set back at least twice as much (Hakuhodo), but more like 3-4 times as much (Suqqu, Chikuhodo). It is softer and more quality than the Tom Ford powder brush and in a completely different league to the Mac, YSL &amp; Chanel powder brushes. It is a beautifully shaped, hand-crafted (by highly skilled Japanese - who make THE BEST make up brushes - brush makers), work of art using the softest hair, which all contributes to making this one of the finest, most pleasurable brushes to work with and own. It comes to a lovely point, enabling more precise control over where your powder is deposited, but can then splay out beautifully to cover a much wider area and to blend out seamlessly. All his brushes are divine and this one is no exception. If you are looking to treat yourself or invest in a quality tool and use powder face products (e.g. bronzer, setting powder, shimmer powder, etc) then choosing this brush is surely the answer - but hurry, because it's limited edition and Wayne has already said that he won't be extending the run!

This is a brush, I still don't know why I bought it. But don't get me wrong, it is a nice brush. It is rather soft and it does the job. However, if I had to compare, I prefer the Hakuhodo, S103, which feels softer, the bristles are a little more &quot;compact&quot; (the bristles of the WG are more &quot;spread out&quot; if that makes sense the brush is less pointy thant the S103 and &quot;rounder&quot;) and the brush feels heavier in hands.

I regret buying this brush. I paid almost $120 AUD to get it shipped from the UK. Maybe I have a dud but it sheds every time I use it and bleeds black colour when wet. Save your money and buy Hakuhodo brush instead.

First off, I have NEVER used a Japanese brush before so this was a first for me in that department. I have nothing to compare to besides drugstore and MAC type brushes. Let me start by saying this is around the same shape and size as a RT blush brush, a little slimmer and much more pointed. This brush is the SOFTEST brush I have EVER felt and could not stop wiping it on my face when I first received it in the mail. It does NOT disturb any foundation and I know now that I want to purchase EVERY brush he has if they feel anything like this one does. I have had NO shedding and really had no bleeding of color in the first wash. None of my Goss brushes have shed and I am very pleased with that because my mac ones DO!! I see the multiple uses right off, and feel a diffused look is the best look this brush delivers. Just like Wayne himself does with his career, non editorial looks, these are perfect for such things. Do NOT expect editorial, artistic looks out of these in my opinion. They are NOT super stiff and are all natural hair(as far as I know).

The Wayne Goss limited edition holiday brush definitely fills a void in the original Goss collection, which is admittedly on the small side. Its large size makes it far more suitable for applying finishing powder than the much smaller #2. Unlike the brushes in the original collection, it's made of goat hair instead of squirrel, and although it's very, very soft, it's not quite as soft as the #2. However, I suspect, but cannot prove, that the #2 is a goat/squirrel blend. Bear with me as I explain: I picked up the Hakuhodo G5521BkSL highlighting brush, because my #2 tends to be used in more deeply pigmented powders (blush, contour powder). I needed something similar to use exclusively in lighter colors for highlighting, so I'm not over washing my very expensive brushes. The Haku G5521BkSL is a goat/squirrel blend, and it's identical to the Wayne Goss #2 brush. I absolutely cannot tell the difference in the way these brushes perform and feel. This makes sense given the cost of 100% squirrel brushes. The holiday brush is 100% goat. I'm of two minds about this. To make a brush this size out of squirrel hair or a blend might make it more expensive than most people are willing to pay. Just look at some of the large squirrel hair powder brushes on the Hakuhodo website! However, crazy person that I am, I would have paid the extra money for a goat/squirrel blend. Don't get me wrong, the brush is still very, very soft. It feels divine, and won't mar your foundation in the process of setting it. My four lippie rating is purely because I wanted this brush to be even more luxurious than it already is. I'm not sorry I bought it, and I'd happily purchase it again, were it not limited edition. That's another reason for the 4 lippie rating; it's kind of silly to create something based on customer demand, and then make it limited edition. Still, this is a very nice brush for the price, and it rounds out my collection nicely. I stand by my feeling that the Goss collection is a great gateway drug to Japanese brushes. At this point though, I think I have enough Goss brushes. Unless he can do something interesting that isn't dupable from Hakuhodo, I'll *probably* pass. This isn't Pokemon.