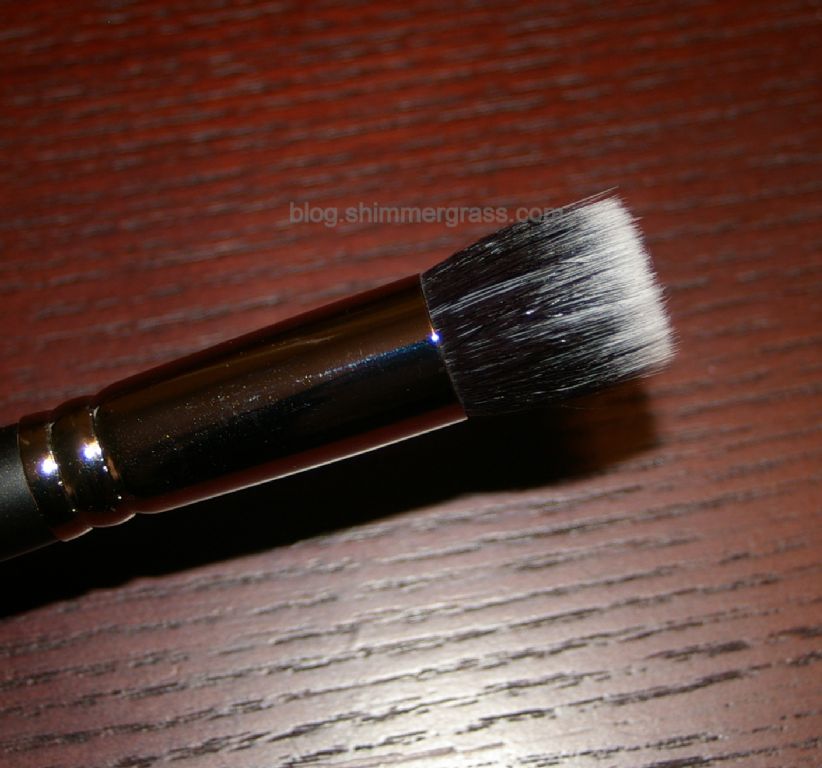 One of my favourite brushes from MAC. It washes and lasts quite well, especially that I wash it constantly as I am using it mostly with cream products like my blushes from Stila and my Bioderma compact sunscreen (which is way to pink so... I am using it as a blush!). It shed maybe a couple of hair so not a big deal. I prefer travelling with it over my 187 as it has a shorter handle.

I absolutely love this brush!! I went to my local Mac Store with purchasing the 187. the SA who was working with me was super helpful so when she told me that I should get 130 instead I didn't give it a second thought. I'm not one to wear liquid Foundation everyday. I mostly spot conceal or use my HG UD Naked Skin which I use my hands to apply so I new that was not what I planned on using this brush for. I do however love it to buff out concealer on my face/ under eyes. the brush head is the perfect size to really get under my eyes and around my nose. I also love using this with cream blush/bronzer/highlighters. This brush really helps keep my makeup looking natural and almost undectable when using creams. I will 100% purchase another brush so I could have a back up.

I love this brush. It doesn't shed at all. It gives a flawless finish.

hate it! expensive and useless ,I wonder how MAC compromises with such quality ,it always shed terribly on my face ,less expensive brushes from Sigma and eco tools do better job!

I absolutely LOVE this brush! I had bought the 187 (short handle) before the do foundation and while it does work well, I think this brush gives me much more control because it's smaller. It also makes it easier to clean! This brush is the perfect size for foundation application and overall I think it's superbly made. It did shed a lot the first few times I've used it, but it's since stopped and I know because it's a MAC brush it's going to last for a really long time. Would definitely purchase this again!

Bought this brush to use for foundation. A YouTuber suggested it. First of all the finish it provided was absolutely amazing. That being said it took forever to even blend the makeup out. What killed this brush was the fact that it shed alllll over my face. One use and about 10 bristles were on my face. I would of kept it to use for something else but how many more bristles would I loose on the next use. For $50 before taxes a brush should not shed. Even my $3 Elf brushes don't shed. How disappointing.

Ok so I don't actually have this brush but I just wanted to let you all know that the pink real techniques stippling brush is a great dupe for this and it's only like $10. I've been reading that this brush has problems with shedding and bleeding. The RT brush has NEVER shed or bled on me. It can be found at ULTA.

Mac face brushes must hate me... With the exception of #187 and #188, they all shed terribly on my face. I bought #130 after reading the reviews that it doesn't shed. It was no exception. The only times it didn't shed was when I used it dirty-it must have been the foundation that prevented the bristles from finding a new home on my face. I therefore reckon that the majority of people doesn't clean the brushes after every single use... It bleeds when washed with Brush Cleanser, I've had it for 10 months and it hasn't been a single wash since then that the white towel used for wiping it hasn't turned black. It applies liquid foundation evenly and gives a nice, lightweight result, as it absorbs quite a lot of product. I personally use 1 pump of foundation (Fix Fluid or Mineralize Moisture) when using my fingers and 2 pumps when using #130 and get a quite similar coverage. I've also used it a couple of times for applying cream blush and cream colour base and was happy with the result. I won't repurchase. I've spent a lot of £££ on Mac brushes (I own more of 40) and the quality doesn't reflect the price. I'll give Sigma a go. After all, their price is only a third of their Mac counterparts!

This probably the most versatile foundation brush ever, you can use the 130 with Lighter coverage foundation/BB cream or with more medium/full coverage. Great for everyday use! Blends well, sheds before 1st wash, easy to use.