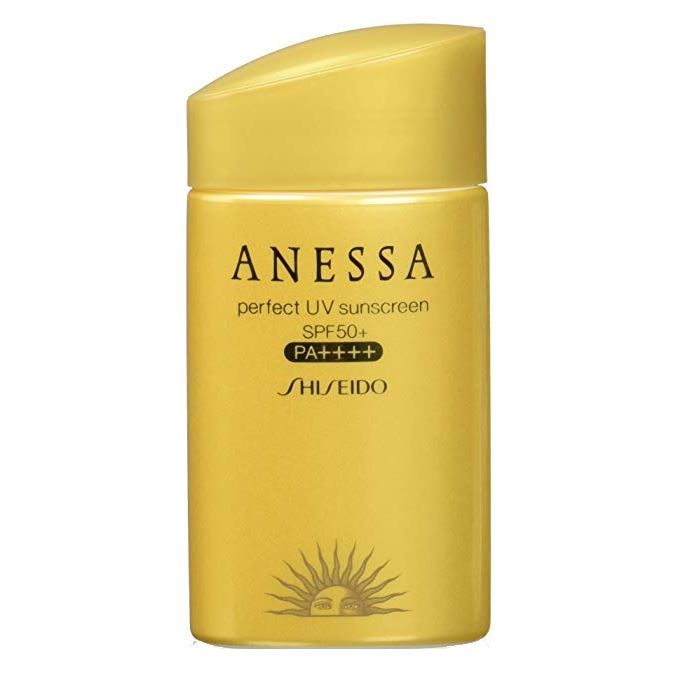 I can't say if this is the best sunscreen because how do i know if it really did does it job well .. Like i can't see the UV being blocked haha but i do love the product! I have also saw video about people trying out different sunscreen &amp; saw that Anessa was one of the best. 1 bottle is about $35 and it lasted me 1 year &amp; i use it generously so it's quite worth. It contains alcohol but it DOESN'T dries me out at all, wow. I tend to have dry patches if i use products that contain alcohol. My make up goes on smoothly and nicely with this sunscreen. I can see why many people love this sunscreen. Highly recommended product!

Again, I am super impressed that this is even on MakeupAlley! This is the best sunscreen I've ever tried. Much better than the Anthelios LaRochePosay sunscreen, which changed their formula a few years ago and now has a ton of alcohol and completely dries out my face. Be very careful which Anessa sunscreen you buy though! I made the mistake and grabbed one off the shelf in Japan, which ended up being the regular Anessa (kind of copper color with the blue top on the cap) not the one for specifically &quot;sensitive skin&quot; (it will say so below on the bottle below the title, like in the first picture). The regular one has alcohol in it, while the sensitive one doesn't. I also think that the sensitive one is slightly more expensive, but doesn't dry out my skin, while the regular one with alcohol does.

Good quality sunscreen that does not give me any irritation. Super impressed with this

As soon as I applied the sunscreen I felt a strong burning sensation on my face and neck. It caused my skin dehydrated and red itchy for months. I will not recommend this product !

The Anessa perfect UV sunscreen aqua booster has SPF 50+ and PA＋＋＋＋, perfect for use under extreme condition (I have easily-tanned light skin, and after having been exposed to cloudless sunny days for half a month in that 39℃ summer, I got very minimum tan). It also pairs fairly nicely with makeup. Besides, its water-proof property is serious! This sunscreen has a strange formula. It is milky white liquid. It feels greasy on my combo-oily facial skin, but it manages to keep my natural oil at bay. So as the sunscreen gradually sets, you gets more matte - great for oily T-zone. However, if you re-apply through out the day, even if you have oily skin, even if you're in extremely hot summer, you'll feel bone dry on the face. And the sunscreen sets to a matte finish very quickly on my hand. Lastly, I suspect that Shiseido has changed the formula. The sunscreen used not to leave any white cast, but the new version leaves quite a strong white cast on my NC20-25 skin and the paleness takes more time to go away. It is also slightly greasier than before. Overall, it still feels more comfortable than the majority of sunscreen and it is something I'll keep repurchace. （Even if it is a really powerful sunscreen, I still don't understand why some people say &quot;a little bit goes a long way&quot;. There's no such thing with sunscreen!）

I bought this based on the great reviews but I had some problems. I bought the one in the light golden bottle, called the mild version for sensitive skin. It is supposed to be alcohol and fragrance free. It was very drying so I did use over moisturizer and my finacea (Rx for rosacea) but it still felt irritating and my face felt itchy but it was a mild itchiness that I could ignore. At first. But my neck was a different story. I realized my neck was bothered by the Anessa so I quit putting it on my neck but somehow it would migrate to my neck through transfer from my hands but it was enough to make my neck break out in a rash each time I wore the sunscreen. The rash got so bad I had to use a cortisone cream. I tried to keep it away from my neck but it was impossible and soon my face was itching too bad to keep using the SS. It is too bad because this had a very nice dry feeling and did not break me out, just caused rash and dry skin. Considering how drying this mild version was I cannot imagine a version with alcohol in it.

his is a fantastic light, liquid sunscreen. It does dry my skin, so I need to apply moisturizer prior. Good waterproof protection. So far has not broken out my skin. I use DHC oil or Dermalogica Precleanse to remove it. I was lucky to find it in an Asian cosmetics shop in Texas.

Currently there are 2 main types of Anessa sunscreen, indicated by gold and silver packaging. The gold type (Perfect UV Sunscreen Aqua Booster) is “super waterproof” and has a silky, light finish. The silver type (Essence UV Sunscreen Aqua Booster) is “waterproof” and extra moisturizing with a dewier finish. Both gold and silver are supposed to come off easily with regular soap or face wash, and currently also come in mild and facial formulations as well. (The basic gold and silver types are OK for both face and body use) If I could have only one sunscreen for the rest of my life, it would be the basic gold one. It comes out really oily and the first time I tried it I thought I had made a terrible mistake, but within a minute the oil completely sank into my skin and left a silky, smooth, natural finish that was neither too dewy nor too matte. It balances my combination skin, calming the oily areas and protecting the dry areas, and caused no breakouts or other negative reactions. My makeup goes on easily over it, and it seems like it has something of a pore-smoothing primer effect. I would recommend the gold type for normal weather, and/or oily to combination skin. I’ve also tried the silver facial type. I bought it during the height of summer and it was much too moist at that time. It sat on top of my skin like a thick wall of glossy slime and even though it didn't cause any breakouts I hated the way it felt. Fast forward to December when the temperature dropped below freezing and there was no humidity in the air, and this thick rich silver sunscreen came into its own. It gently hugs my skin and shields it from the elements like the loving hands of angels. The finish is no longer shiny, it’s natural, and it stays balanced all day long. The silver type is excellent for extremely dry weather and/or dry skin.

Original reviews: This sunscreen has been number 1 very hyped Asian sunscreen for many years. It recently became available in two different versions. Golden bottle (product preview or third picture) - Anessa Perfect UV Sunscreen Aqua Booster SPF50+ PA++++ Light gold bottle (second picture) - Anessa Perfect UV Sunscreen Aqua Booster Mild SPF50+ PA++++ The difference between two is huge, mild one formulated for sensitive skins, doesn't have alcohol, mineral oils, fragrance or preservatives among ingredients. The original formula is super waterproof. Here are the ingredients lists: Original (gold bottle): Dimethicone, Water, Alcohol, Zinc Oxide, Ethylhexyl methoxycinnamate, Polymethyl Methacrylate, Isopropyl Myristat, Talc, Isododecane, Octocrylene, POLYBUTYLENE GLYCOL/PPG-9 Trimethylsiloxysilicate, PEG-9 Polydimethylsiloxyethyl Dimethicone, Diethylamino Hydroxybenzoyl Hexyl Benzoate, Titanium Dioxide, Glycerin, Diisopropyl sebacate, VINYL DIMETHICONE/ METHICONE SILSESQUIOXANE CROSSPOLYMER, Dextrin palmitate, Xylitol, Bis-ethylhexyloxyphenol methoxyphenyl triazine, PEG/PPG-14/7 dimethyl ether, Sodium chloride, Ethyl Ascorbic Acid, Dipotassium Glycyrrhizate, Angelica Acutiloba Root Extract, Thymus Serpillum Extract, Rosa Canina Fruit Extract, Sodium Hyaluronate, Curcuma Longa Root Extract, Isostearic Acid, Aluminum hydroxide, Triethoxycaprylylsilane, Disteardimonium Hectorite, Stearic Acid, Hydrogen Dimethicone, Distearyldimonium chloride, Trisodium EDTA, Butylene Glycol, BHT, Sodium Metabisulfite, Fragrance Mild, for sensitive skin (light gold bottle): Cyclopentasiloxane, Zinc Oxide, Diisopropyl sebacate, Methyl methacrylate crosspolymer, Water, Cetyl Ethylhexanoate, Pentaerythrityl tetraethylhexanoate, Triethylhexanoin, Diethylhexyl succinate, Titanium Dioxide, Dimethicone, Glycerin, Polymethylsilsesquioxane, Dextrin palmitate, PEG-9 Polydimethylsiloxyethyl Dimethicone, Ethylhexyl Triazone, Diethylamino Hydroxybenzoyl Hexyl Benzoate, Disteardimonium Hectorite, Trimethylsiloxysilicate, Bis-ethylhexyloxyphenol methoxyphenyl triazine, PEG/PPG-14/7 dimethyl ether, Sodium chloride, Dipotassium Glycyrrhizate, Angelica Acutiloba Root Extract, Rosa roxburghii extract, Sodium Hyaluronate, PEG-10 Dimethicone, Aluminum hydroxide, Stearyl Phosphate, Silica, Sodium Citrate, Sodium Pyrosulfite, Tocopherol Like an idiot, I've managed to check an English version of the ingredients list for a Mild formula but bought an original one. It's very watery, a pleasure to apply, and it doesn't leave a white cast. It's 80 min water resistant and easy to reapply. It will remove any shine from the face. I have sensitive dehydrated skin and high alcohol content from the original formula badly dried it out till the deepest layers (at least that how it feels). I'm very sensitive to Isopropyl Myristate, so now I have clogged pores and pimples. I think it's an amazing product for people with an oily non-sensitive skin, but I will purchase a sensitive skin version and review it later. For now, I can't give it more than 3 stars. UPDATE: Sensitive skin version - Anessa Perfect UV Sunscreen Aqua Booster Mild SPF50+ PA++++ WOW! My search for a facial sunscreen is over. I used it daily for a month now, so I feel confident to write an update. - the mild version is a bit thicker than the original formula, but there is also no white cast; - it's non-drying, even if used without moisturizer underneath; - no oily residue whatsoever if I use it without moisturizer underneath; - no clogged pores; - no irritation; - works great under makeup. AMAZING product! HG! Must have from now on. UPDATE April 10th 2018: This sunscreen (at least it's Sensitive skin version since I can't bare the dryness of the original formula) doesn't work under the sun. It was great during the winter, but my face becomes really red and irritated after 2 hours outdoor walk and it's only the beginning of April. I live in Northern California and this sunscreen doesn't do the job even here. My husband took it for a ski trip in the Alps and got burned. I regret repurchasing it. This is a good sunscreen only for at the office days. Doesn't worth considering for summer.

If you travel to japan, I think you have to pick this product, you can find it in any matsumoto kiyoshi store I use the one with golden bottle This is a lightweight sunscreen, doesn't cause any breakout, doesn't leave any whitecast, and oil free i think it's perfect for any skin type So pricy but it worth the money and worth its holly grail status as one of the best sunscreen, no wonder people loves it. Sadly, it’s not available in my country :(