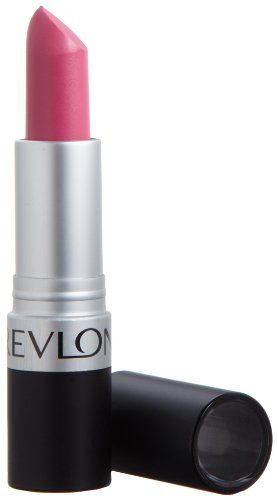 I discovered that I don't like the look of matte lipstick that much and bright pink doesn't look good on my NC25 skin. I bought this on sale at CVS (they routinely have ExtraBucks offers on Super Lustrous). Was considering returning it, when I discovered that it makes a FANTASTIC CREAM BLUSH: good pigmentation, lasting power, texture. Please, check out my notepad for $10 referral links to Paula's Choice and a few clothing retailers.

I can't understand why this is getting such bad reviews. I love it, it's bright but not too bright, I love the matte formula, it doesn't dry out my lips, and it glides on easily. It adds a pretty pop of color to any look. I would definitely repurchase.

Has a cosmetic product ever made you feel angry? No? Well, if you want to feel absolute rage buy Revlon Super Lustrous Matte in Stormy Pink. Absolute hideous application unless you are into a lipstick transforming your pout into a 100 year old woman. The pigment is AWFUL. Shows every line in your lips. I have to stop typing as my anger is increasing.

Definitely one of my most used product, this is perfect for those looking for budgeted matte lipsticks in a cool pink tone at a good quality. Good colour pigmentation and colour pay-off. A tip though, is to make sure your lips are moisturised and exfoliated with no extra dead skins as matte lipsticks don't do justice to dry lips :)

this is my best pink lipstick ever

Revlon makes good lipsticks for the prices, and it's also appealing that many of the matte lipstick colors have been around for decades. I just get a kick out of knowing that the women in those 50's and 60's photos I like may very well have worn the same lipstick I am wearing. Not the less because most of these colors are by no means Stepford shades. I love the outre quality of Strawberry Suede and Fire and Ice, and THOSE have been around for ages. Stormy Pink is a strange shade too, and I mean that in a good way. It's a rosy pink, but not quite rose... or at least, it has nothing of the organic, breezy quality you'd associate with a rose to it. There's a fair bit of white mixed in, so it inevitably jars on complexions that have any kind of color in them, but it's not pale at all either, as the "rouge" component of the pigment is a very intense candied pink. It's not quite pastel, either, though, as there is also a gray undertone to it that tones it down and makes it more ladylike... though this lady would not be your average debutante. I am Asian, so the effect is rather striking on me, which I actually like. I employ Stormy Pink as a chic, edgy alternative to a nude lip (I can't wear actual nudes, they totally wash me out), as that pastiness and the matte texture create a similar "blank canvas" effect, only with the visual punch of the mod pink. Due to the weirdness of the color, though, it does require a full face of makeup to look good: all ruddiness (and I have a fair bit of it) should be neutralized, and eye makeup is a must (even if it's just a little bit of liner... or even just black mascara, if you have good lashes). It's not really a lipstick you'd reach for to look fresh-and-pretty and groomed-but-not-groomed. It is matte, so it's inevitably drying, but I've found it's actually not AS drying as it's been made out to be, and certainly not compared to other matte lipsticks: it's more silicones than anything else, so it glides on better than, say, Ruby Woo would. All in all, a solidly good purchase and a fun blast from the past. Not an essential in my makeup bag, but it's fun to have around and experiment with now and again, and it's still high-quality enough to avoid being just a cheap bag of thrills. P.S. If you already have this, are intimidated by the weirdness of it, and/or are looking for a way to wear it in more everyday situations... layer a peachy gloss over it or dab a warmer pink lipstick in the center of your lip... that actually gives a really pretty, rather dolly effect that's also work-appropriate.

Beautiful! Don't know why everyone's giving it horrible reviews.. I was a little unsure about this because it's kind of a bright pink but when I put it on I loved it! It made my lips look soft & kissable. Not drying At all. I have tan skin & it just looked beautiful! I never had a matte lipstick but this one is definitely a favorite! My go to color now! I love how it's buildable or if you want a nice soft lip this is perfect!

I bought this when CVS had buy one get one 1/2 price. It looked so pretty in the tube, but it barely shows up on my lips & what little bit does show up fades very quickly, so I have to constantly reapply. Even using a lip primer does nothing to make this crap work. HATE. Will not repurchase. I should have returned it instead of trying to make it work.

I didnt purchase this lipstick, but my friend gave it to me because it was too bright for me. At the time, i liked bright pink lipsticks and I was still a newbie with make up :) Pros: -If you are looking for a bright pink shade (Nicki minaj pink), this could work. -If you are looking for a matt lipstick, this is matt Cons: -It is a matt formula , and unfortunatly very drying too. Its better with a lipbalm, but then, another problem may come: -If there is dry skin on ur lips: its gonna loook unflattering -the pigmentation is not amazing either. Yes, you can see the color, put you will need a few coats so make it more visible. I cant comment on the lasting power because I have never worn it outside... In conclusion, i have one thing to say: Do not waste your money. Nowadays, there are so many good matt lipstick that provide moisture too and pigmentation! (I heard the new Loreal matt lipcrayons are good).