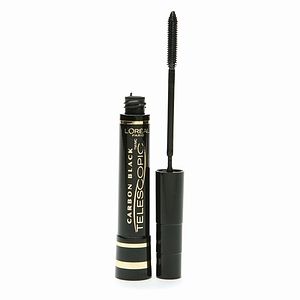 This mascara is hands down the best mascara ever!! My HG & I have tried almost every drugstore mascara out there no other tops this one! It makes my super short non existing eyelashes look long and curled! I like that it dries fast so I don't have to wait to apply the second coat. It does not clump and that comb wand separates every lash!! I LOVE this mascara!!!

Yuk! Gloppy with useless comblike wand that clumps my lashes!

I feel like I'm definitely one of the few people who did not like this mascara! I had very high hopes for it after reading and watching a lot of reviews of this mascara and how so many people swear by it. It was $7.99 at Target, which to me is a little pricier than most mascaras that I use! And I was super disappointed by it. I have long lashes that aren't that curly or voluminous, so in all my mascaras, I look for one that can add length and volume. First of all, the mascara wand is very thin and a bit flimsy. It didn't grip to my lashes at all and it got a bit annoying with the flimsy wand because it kept wobbling when I wanted to coat my lashes. The formula was also very wet and for me, it kind of weighed my lashes down a bit. It also stuck some of my lashes together and when I wanted to separate them, it made them clumpier so then you have to use a clean spoolie brush to separate them and I felt like I was just going in circles with the whole process. Not to mention, when separating them and reapplying the mascara, you would get very separated, spidery lashes. In order for me to get the look I actually wanted, I had to apply over this mascara with another one of my mascaras. Without the other mascara over it, it wouldn't even hold the minimal curl that the mascara gave. It made my lashes straight, clumpy and flakey and that is definitely not a look I want to sport. I would save your money! I wouldn't even wear this on my more natural makeup days!

I absolutely LOVE this mascara. I had a very easy time with application and applying multiple coats quickly. It lasts all day without smudging or flaking. I have some thickness but needed length. It delivered beautifully. I've used tons of other mascara's, and ones that were 4 times the price of this one. I've been using this one for about a year and a huge plus is the price.

It's kinda clumpy at first because it's so wet but you can easily fix it with another old brush. I just got done crying and my eyelashes still look good!

I usually love and only use L'Oreal mascaras but this one was such a disaster. My HG ones are voluminous carbon black and miss manga. I wanted to try this because all my friends love it and the reviews seemed good but I honestly hated hated hated this mascara!!! First time I tried it, my eyelashes look so sad and pathetic I had to top it off with another mascara. Not sure if it's because I'm so use to the voluminous mascaras but when my friend wears this her eyelashes look amazing so I tried her suggestion with using it for a week or two so enough air gets into it and makes it apply better but nope.. nothing, makes my eyelashes look thin, and gives no curl, my eyelashes seemed to take on a lot of product (no matter how much I scrapped off the brush), they would clump a bit and flakes like crazy. I usually like a no make-up look and thought this would be a little perfect but the formula or the brush drives me insane, I really can't describe it but this mascara was a miss for me. I forever regret buying it as I didn't wait for it to be on sale. I gave this mascara a month (wore it maybe 3 times a week alone) before I dumped this thing in my trash can.

It took me a while to find this mascara. I bought the voluminous one by mistake at one point but returned it without using it because this was the one I wanted. First, the wand is very strange. I can't really call it a brush because it isn't one. It's rubber and overly flexible so I have to be careful with it, and it applies A LOT of product. My lashes wind up so clumpy that I have to have a clean spoolie right there to go through my lashes with because I can't afford to wait until the clumps dry. As for longevity, it seems to last all day, but it smears and it flakes (though only a little) and primer doesn't help or hurt so I don't bother with it. I used this mascara for 6 weeks, which is a long time for me (I usually throw mascara away after 2-3 weeks) and finally had to throw it away in September because it is too hard to remove. Even after using BB longwear eye makeup remover, KGD spa cleansing water, a makeup remover wipe, and rinsing thoroughly with water, I would wind up with mascara on my pillowcase and smudges of mascara under my eyes the next day.

This is my absolute holy grail mascara. I've been using it for years and will never ever switch! Naturally I have long and thick lashes, and this does wonders to them. I like my mascara to be a little bit clumpy, and I think that might be why I love this product so much. It might not be a good option for those who like to apply one coat and go, but it is my absolute favorite thing ever.

This mascara has two pros: it's very black, and it's inexpensive, aside from that it's pretty much garbage. The length it adds is minimal, it will not hold a curl, and it both smudges AND flakes at the same time. I've probably worn this mascara 20 times or so and every time I end up with stick-straight lashes and black smudges and flakes around my eyes. Will not repurchase.

It's worth trying! Nice and dark, does not flake or clump. I find the wand to be good because I have sparse lashes and those giant wands just don't get in there for me. This wand is slightly flexible and thinner. Honestly, it's smooth enough I don't need to comb through with a spoolie after application!