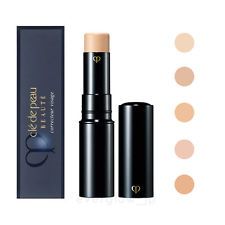 I will tell you how many times I bought this in my life: four times. Once was for a gift but the other three were for me. It is quite indulgent and wrong as I just have one face. I got Almond, Honey and Ochre. In fact I think I got the Almond two times as I ran out of it. I thought they were good, until I tried Kryolsn Dermacolor. With a moisturiser under, the Cle de Peau side looked wrinkly (the dried wrinkly look that concealer can give) but the Kryolan side looked fine. If used anywhere besides my under eye area the CDP causes pimples for me. So even if I blend the CDP down from undereye darkness to just a tad on the cheek I am guaranteed clogged pores or a pimple that week on that area. Kryolan has not caused skin issues for me. The CDP needed to be touched up 1or 2 times a day for me (despite powder). The Kryolan I do not touch up usually and remove at night. I have tried to use a MAQpro corrector under both of them but the CDP doesnt work well with it. It stands better alone. The CDP doesn't have as good a shade range as Kryolan. One thing in favour of CDP over Kryolan is that it is way more user-friendly. A beginner at makeup can use it without issues. The Kryolan needs to be worked with and you have to figure out which type of applicator you prefer and whether you want it diluted or full on. However this is not a problem for a big makeup geek like me. CDP looks nice but Kryolan in my opinion looks much nicer. Therefore what I once thought was a 4 star product I must now say is a 3 star product, factoring in the price.

MUST HAVE! It looks small, but I only need a TINY little bit to cover any blemish (mostly what I use it for). For any dark circle, I think it's best to use the concealer with a brush, since it can get a tiny bit dry/cakey if I use it with finger tips.

It doesn't work on dry skin. The formula feels like a very powdery thick cream. I can't blend it well, and even during the initial out of the tube application, the product drags my skin. Like the other reviewer mentioned, I also have the impression that by battling with this product, I create more wrinkles under my eyes. If I use the brush for the ​initial application, the process becomes very time consuming, and the result isn't better. I have way better luck with liquid formulas.

Hands down the best concealer I’ve ever bought. It’s creamy with good coverage, but doesn’t cake. Definitely an expensive product but worth it.

Just Ok... prefer the Chanel one by far!

The best all-round concealer for any area of the face requiring medium to full coverage. The consistency delivers enough slip for blending, but not so much that it utterly disappears. In a pinch, I have found that it adequately serves as both concealer and spot foundation, making it perfect for travel or a night out. The finish is natural, leaving no tell-tale signs of makeup. It is highly concentrated, so very little does the job nicely. It's my go-to concealer, but the shades are limited, requiring two for shade perfecting. The packaging is reliable, but prefer product-in packaging rather than a twist-up.

Not great for dry skin. Although it does cover my dark circles I find there is no slip. I first I tap with my finger (the warmth of my body softens the product, then go to concealer brush to even out. Too much fiddling and I feel like I'm contributing to my wrinkles! No issues with sensitivity and I have sensitive, dry skin. I've had this for over 2 yrs and have hardly put a dent in it, that's how often I've used it! All in all I feel this is much better suited for oily skin.

Edit- I'm upgrading. Over a cream and set with Laura Mercier secret brightening powder (pressed in with sponge) this is the best I have used. It also gives an airbrushed look in pictures-- -- It can slide and doesn't cover evenly. Works better over powder. I have almond which is a great colour. Other than that I wish I had better things to say but I don't. I am under 30 yes old but this makes me look as though I have fine lines under my eyes which I do not. I wish I hadn't bought it . A concealer that works better is Vasanti the orange or peach liquid corrector, under foundation. Other than that the gold zguerlain click pen is also better.

I am 35 years old, and have dark under eye circles and some fine lines under the eye. So I'm like Goldilocks picky when it comes to under eye concealer and I've tried so many (Mac, Bobbi Brown, Laura Mercier, Bare Essentials, Estée Lauder, Nars..) After years of debating about buying this .. I finally bit the bullet. I was hoping I wouldn't like it ($70??) but I love it. I am NC30 (medium tan with yellow under tones) and I got the Almond - that is the best match (better than Ochre , which is a tad darker) This concealer is highly pigmented so it actually does cover a good deal of darkness, it was creamy and went on smoothly and did not have major creasing issues. The finish is a silky powder? Hard to explain but wonderful. Also, although expensive you can barely rub your finger on top of the concealer and use a tiny bit and it covers so well that you don't need a lot. So actually, I do believe it will last me a year or more so the cost probably evens out to many mid priced concealers where you have to apply more. I don't think any concealer can cover 100% and not have any creases (it's concealer not a magician) but of all that I have tried it covered the best, had the best finish and creased the least. Worth mentioning, this performed the same as my Mac Prolongwear concealer, and that's $20. I even tested the Mac on one eye and Cle de Peu on the other- it was almost the same result and longevity. I do find the CDP easier and quicker to apply, and I liked the finish the best- but if you're looking for a concealer that doesn't break the bank and performs the same- the Mac Prolongwear concealer was just as good honestly. Again, I do think that the CDP will last longer than the Mac so the cost may even out anyhow. I will keep the CDP because I can apply so fast and it looks awesome.

I got a very generously sized sample from when I ordered something from nordstrom. I have a light touch with makeup and the sample pot will probably last at least a few months for me. They do sell the samples on eBay if you don't want to commit the cash to the full tube, or you're not sure of the color. I had big, big problems with this in the winter. I had dry winter skin and this product was majorly settling into lines. Each time I tried it, I ended up taking it off because it looked so bad. Now that spring is here and my undereyes are in better shape, this still isn't the product I reach for, but I do see the appeal. I have a medium complexion with extreme dark circles. I don't wear foundation and typically just look for creamy, light concealing products that I can touch on lightly to diffuse the darkness instead of totally cover. I have found this to work ok just blended over the bottom edges of my dark circles to soften them, but it does require layers, which I don't like to do as I feel it emphasizes lines and ages me (I'm 39). I really like the ease and quickness of just swiping on the stick with the full sized product. I'd describe the finish as more powdery and blurring than creamy. No highlighting effect or skin brightening, more of a soft focus airbrush finish. I think many would really like this, but it just isn't right for me. Would have been 4 lippies if it were half the price that it is.