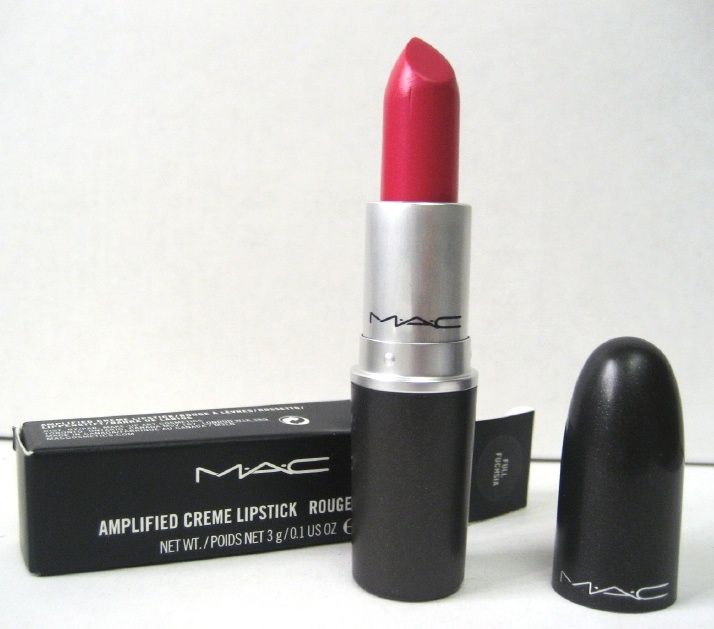 I chose this as a Back to Mac freebie so the price - pretty darned good. MAC's Amplified Cream formula is my favourite of all their lippies and I was going to get yet another tube of Craving (I generally have 3 or 4 on the go at any one time; it's my real &quot;go to&quot; and has been for ages) but wanted to see if I could find something close to and less costly than Givenchy Fuchsia in the Know. I looked at Girl About Town but then the SA suggested Full Fuchsia and it was pretty darned close. It's a bit brighter and more pink than the Givenchy lipstick but even at full price, it is far less expensive and it really looks pretty but not alarmingly bright on me. It may well become another MAC go to lipstick for me.

I love this lipstick! Im a fan of bright fuchsia lipstick and with one swipe it completely brightens my face! Its also long wearing too which is a plus. It lasts 6 hours with no touch ups. If you love bright lipstick you should definitely give this a try. I will repurchase when mine runs out.

Love, love, love!!! Just one swipe and my lips are as pigmented as pigmented can be. The colour is very true to its name - it's a full-on true fuchsia - and perfectly fills that hot-pink niche in my life that I didn't realise I had. It seems to be compared a lot to Girl About Town, and I have unfortunately not had the chance to check them both out next to each other, but chances are I would still go with Full Fuchsia as it is just the perfect burst of colour for me. As with all Amplified Cremes, it does wear down quite easily, but that's not anything particular to this shade. It also can be slightly unforgiving with its application due to its ridiculously good pigmentation, so a brush is recommended. Genuinely one of the only lipsticks I would ever repurchase; and I have already bought more lipstick than I will ever need, so that doesn't come lightly.

EDIT: This lipstick is the first of all of my MAC lipsticks to break on me. :( Oh well, I'll repurchase if i absolutely can't even use a brush to apply it. I'm not a big fan of depotting things, so I'll definitely be buying another one. :) I also paired this with the Process Magenta Chromagraphic pencil, and it matches so well! Be sure to try that out with this lipstick! I am very pale, blue eyes with brown hair, and when I put this lipstick on, it brightens my face SO much! I love it! It is amazing, and I'll buy it again if I ever run out! :)

Full Fuchsia definitely lives up to its name. It's a true fuchsia that really brightens the face in a swipe. Described as bright clean warm pink, Full Fuchsia goes very well with my NC20 skin tone. Wearing it is a nice break from all my shocking cool pinks (which I still love btw). It is also an amplified creme, which makes it incredibly creamy on the lips. The color pay off is insane as well. It is highly opaque and lasts a really long time. It can withstand few bites and drinks and leaves a nice tint on the lips. Unfortunately, Full Fuchsia is a PRO shade, which means that is not available in our local counters here in the Philippines. But if you could get your hands on this lipstick, grab one now! :) http://mygorgeouspinkcheeks.blogspot.com/2011/08/mac-full-fuchsia-lipstick.html

This is a very pigmented, long-wearing lipstick with a creamy, slightly glossy finish. The color is a hot pink that is redder and warmer toned than Girl About Town. It aplies smoothly, doesn't bleed and fades evenly, leaving a stain that I can only completely get rid of by scrubbing with a toothbrush. I don't use lipliner with this but I do sometimes use a skin-colored pencil outside the contour of my lips to keep the line more defined. I have light yellow-toned skin and black hair and this looks very nice on me, as it brightens my whole face. I still slightly prefer GAT over this, because I find that the contrast with the cool tone in GAT makes my face look more vivid. The formula is neither drying nor particularly moisturizing. When I need more moisture, I top this with Pink Poodle Lipglass, a sheer hot pink that is slightly cooler toned, but still a very good match. .

MAC Full Fuchsia is a pro colour which makes it kind of hard to get. But it is a beautyifull colour, really. I'm an NC25 and the colour is just the perfect bright pink. It does have slightly blue undertones but still works perfectly fine with my complexion. Full Fuchsia will make your lips stand out but in a very good way. The amplified creme is opaque in one layer and lasts about 5-6 hours on me which is an oncredible wear time! It leaves my lips feeling smooth and moisturized though they do flake a little after 5 hours of wear which doesn't bother me at all. It stays smooth when you reapply after about 4 hours. Overall it's a truly beautiful colour which i think will work on a lot of skin tones and the formula is the best I have tried so far. Too bad it's a pro shade so it is not as available as the regular MAC lipsticks. But if you can get your hands on it, DO! Definite recommendation.

I'm a 'bright/clear winter' colour type with lighter than NW15 skin. This lippie for me is what Girl about town should have been. GAT is far too blue based for me, whereas FF is more red based. Just perfect. If you ever see 'Utter Fun'- that's what Show Orchid should have been too- proper red-pink, not violet pink. I only wear bright red, hot pink, red pink and dark red lipsticks so I own a lot of them- this lippie is good- but it's not as good as my HG Revlon Cherries in the Snow.

Every once in a while, MAC releases Show Orchid, but this month, it was followed by a similar colour called Petals and Peacocks that came out with the Liberty of London collection which piqued my interest and got me wondering how they were different. Throw in Girl About Town in the mix and you have one very confused shopper. So I dropped by the Pro store where I found all three, and Full Fuchsia and Impassioned, and I decided to try them all out so I could make the best choice. Right at the beginning, I dismissed Petals and Peacocks because there was too much blue in it for my NC30 skin. Impassioned also looked garish so I only tried on Show Orchid, Girl About Town and Full Fuchsia. Show Orchid was smooth to apply but its colour was slightly too cool for me due to its slight violet sheen and it was also slightly less opaque than the other lipsticks that I would try. Girl About Town was a lot warmer on my lips and complemented my complexion much better. However, it didn't apply smoothly and was a little splotchy in a swipe, even thought it had the same finish as Show Orchid- Amplified Creme. Lastly came Full Fuchsia. On my lips, it was very close in colour to Girl About Town, so much so that I didn't pay attention to the colour but rather the texture. It is also an Amplified Creme, but unlike Girl About Town felt a lot creamier and therefore applied much more easily and evenly. Naturally, I chose Full Fuchsia over the other lipsticks, both for its very complimentary colour to my skintone and for its superior texture and pigmentation (all three are pigmented of course, I'm referring to how opaque it looked on the lips in 1-2 swipes). I also own Strayin' (from Hello Kitty) and Rock Out (a bright pink Slimshine) and Lickable (Cremesheen), which can all qualify as hot pink colours. I find that Strayin's colour is too cool and therefore a little garish on NC30. Its texture is also very gritty (I had flecks of glitter on my lips on which I could chew). And even though Rock Out is a blue-based bright pink, it doesn't translate as that on the lips. Rather, compared to Full Fuchsia, it is slightly darker and less in your face. Its texture is not as creamy as an Amplified Creme would be, but it is very emollient and glides on smoothly. A swipe of Rock Out isn't as opaque as Full Fuchsia is, but it is far from being sheer, and the colour is buildable without feeling heavy on the lips as creamy lipsticks could sometimes be. As for Lickable, it is a warm colour like Full Fuchsia is, but in the tube, is already less bright than Full Fuchsia. Full Fuchsia is more vivid and more amped up, whereas Lickable is more muted and wearable. Its texture is between an Amplified Creme and a Slimshine and its initial colour pay-off isn't as intense as an Amplified Creme but can be layered on. In all, I am very happy with my purchase of Full Fuchsia. It seems that I just might have found my perfect shade of hot electrified pink that is tasteful and classy.