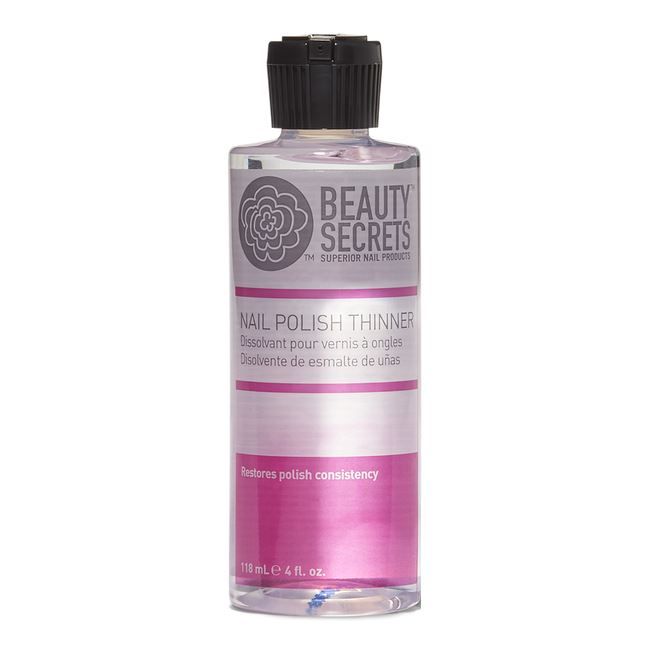 Great price. Great quality. Great packaging. Has a dropper-cap so you can easily add a few drops into your nail polish. There's a lot of product in the bottle for a good price. You only need about 2-3 drops to thin out some very goopy nail polish. One bottle for about $4 will probably last 2 years. I use the same white nail polish every month so this is much needed.

Love this but it gets goopy quickly. You only need a little bit and that goes a long way. All of the colors are great. Quick application and you will appreciate how little you have to put on to see a nice difference.

I love love love this thinner, it makes any nail polish back to its original thinness.

This is the only nail polish thinner I have ever tried and I don't think I'm going to switch anytime soon. Pros: I got this online from Sally Beauty for less than 5 dollars a couple of months ago! Which I say is an amazing deal for such good quality. Basically, my first impression was amazing. My mom has a bunch of really old nail polishes, some from before I was even born, which have gotten super thick and disgusting. We always threw old nail polishes away and bought the exact same ones over again, even if they were barely used! Now we don't throw anything away knowing that we can restore them back to their original state. Cons: Although it says that you can apply about 1-3 drops, you need a little bit more. I've had this thinner for about 6 months since May and have used it on the thickest of thickest polishes and it's not even halfway done yet.

Awesome! I have over 400 nail polishes and some of them were starting to get thick and goopey. I thought they were goners until I learned about NP thinner. I bought this, added a few drops to an old chunky bottle, and viola! Like new! What I do is add a few drops then gently roll the polish bottle around in your hands instead of shaking it. It worked great! Like new polish!

Cheap, vegan, effective. I go through phases where I remember that nail polish is fun and break out my collection. This can happen maybe about every two years which means a collection that can go unused for ages. Just tried this on brands of nearly very price range and voila, beloved glitters that have evaporated into unusable collections of sludge might as well be fresh. Polishes that are almost ten years old are new again. Get this. You will not regret it.

Unfortunately, it turns out this product contains heptane, which can melt glitter. It hasn't actually happened to me, but I'm not going to risk it! I've switched to Orly's thinner. Too bad, because the Beauty Secrets is soooooo much cheaper and easier to acquire (and comes in a bigger bottle).

This stuff is so cheap and effective, I tell all my girlfriends it's a must have. In fact, I might get a case and give them out at Christmas. It makes old nail polishes new again, it doesn't have it's 3-free unlike like SV Restore, and the little dispenser does the job. I wish it had a dropper cap but the dispenser works fine. I use it even on new nail polishes that are too thick for my taste, like Zoyas. It basically restores the solvents that evaporate from nail polish. Nail polish dries through evaporation. Thick, separated nail polish doesn't mean it is expired, it means it needs this stuff. Because it's made entirely of nail polish solvents that evaporate, it will eventually evaporate anyway. You get a pretty sizeable bottle (considering you only need a few drops usually, or if your polish is seriously dried up a nice squirt of it) for about five bucks.

I have tried this on vintage polishes (pre-2006) that have all the chemicals that aren't used lately and it works ok. But, I think it works best on newer polishes. A 2002 OPI I have didn't thin very well. I don't know if some of the pigments have broken down or what. I used a couple of drops and several big squirts of the thinner. However, it has worked great on newer polishes from drugstore brands to higher end salon brands. I have used it on 3 free and 5 free brands. I don't know which brands are 4 free, but if I own any, I have used it on them. If I use it when polishes first start thickening I only need a few drops. If its really bad, I need more. I am at the bottom of my bottle and I will be buying another one. The bottle lasted me about 2 years.

This stuff is amazing. It fixes all of my glitter polishes when they're too thick and it's perfect for Seche Vite.