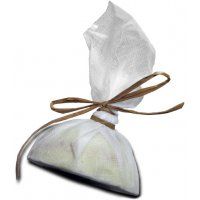 As another reviewer mentioned, Ceridwen's Cauldron makes a great skin conditioner/ moisturizer when used AFTER a bath or shower. Extremely moisturizing, and the scent is divine. Since it comes in a muslin wrap, that makes it easy to hold even when your hands are wet. The oat-y mixture is on one side, so that is the side I use to exfoliate elbows , knees, while the non-abrasive side is good for pure moisturizing. I love LUSH's naked line (naked of packaging) but Ceridwen's Cauldron is even more soothing and moisturizing. I wish they made this scent into a perfume.

Love this product; have been through many. It’s like a palm-sized little dome of cocoa butter with a bottom ‘crust’ of oatmeal and herby stuff. Smells like...well, cocoa butter, lavender, some orangish citrus (orange?tangerine?clementine?IDK) and a small hit of other stuff (toasty oats, sandalwood, maybe frankincense, etc) and it does not bother my tetchy allergies. LUSH would have you use the whole thing at once, but unless you’re just so rich as to splash out, or your tub is the size of Al Pacino’s in ‘Scarface’, you don’t have to. It’s much more cost effective to cut it up (I have a smallish 50’s era tub so I cut into thirds and get THREE baths!). The idea is to hold it under warm/hot running water and melt it into the tub. When I’ve just thrown it in, it hasn’t melted down completely and it floats around in a wad. If you want to avoid the oatmeal ‘crust’ going down your drain, use a drain strainer or tie the chunk up in the little cheesecloth sack it comes in as you hold it under the water stream. The butters will melt through it and the oatmeal stays in the sack. If you cut it up set the extra pieces somewhere and just tie up the one you’re using. Empty the oatmeal after and when the cloth is dry stow the remaining chunks back in it! Anyway, I find a 1/3 melt is an effective emollient. I don’t have to moisturize upon exiting the tub and that’s ACE for my lazy self. After a nice hot bath I just wanna tie my robe and loaf. I don’t want to lotion up. I have dry skin, not to the point of ashiness or flakes, usually, but I mean, I can put on old-time Nivea or Aquaphor and not be greasy twenty minutes later, let’s say. So I’m vouching for its softening properties! Only two ‘negatives’: one, as it is oily, it does sometimes scum up the waterline of the tub. This is outweighed by the quality of the moisturizing and the VERY relaxing bedtime-y scent. Two, since it is made of butters, it melts if it gets hot enough. If you order this to be shipped to you and it is more than about 68, I wouldn’t if I were you. I believe LUSH has a cutoff temperature of their own which is higher, but I personally would be even stricter. I order a load of em’ in the cold months and ration them out. Likewise if you buy this instore when it is warmer weather go straight home!!! Do not leave this in your car while you hit other stores. You will come back to no melt and greasy stained whatever-it-was-touching. Even with those two drawbacks I love this product and hoard it like it was doubloons. If being bath-softened and calmed sounds nice, try one!

Love, Love Ceridwen's Cauldron! It left my skin super moisturized, but not in a greasy way. It also didn't grease up my bathtub. I just did a quick rinse and my bathtub was relatively clean. The oats were a nice touch, which I used to scrub my skin after the product melted away in the bathwater. Try not to scrub too hard because the bag may break. Only huge con is that it is super expensive for a one-time use. I was able to split the product into two uses and it did a decent job for a two-time use. I will repurchase for those days where a pick-me-upper is needed.

This smells absolutely amazing, the sandalwood and lavender really compliment each other. I also like that this comes in a sachet, which means no mess in the bathtub after. I filled my tub about half way with very warm water and swirled this around in the tub, making sure to let it go under the faucet a few times. It produced a light amount of bubbles and made the water milky in color. The next day my skin feels really soft. The cashier at Lush said this melts really easily and not to leave it in the car on hot of humid days. It's been unusually humid here and I kept this in it's paper bag for day in my bedroom until I used it and it just barely started to melt, which turned out to be a win because it fragranced my room.

This bath melt is amazing! the oatmeal in the bath melt is incredibly soothing to the skin and the lavender oil is calming and relaxing. After the bath melt had dissolved I love to take the packet and exfoliate my entire body with the remainder. My skin is really dry, so anytime I go to LUSH I mainly focus on things that are moisturizing, this certainly meets that qualification and the scent also makes the grade. I've already purchased this at least twice since the first time I've tried it, so its definitely something I will be keeping around.

Nothing special about this. Not particularly moisturizing or softening to the skin. I get better results from other bath melts that cost less money.

I didnt think much of this. It had a subtle lemon scent. The best thing about it is the packaging. You are supposed to tie it to your bath taps/faucets while you run your bath and it looks really unique. As with most lush products, it is overpriced. Would make a nice present for someone.

Was suggested this for my dry, itchy, eczema-prone skin. Scent was very relaxing and not too overpowering. Created a nice milky bath that felt good and soothing on my irritated legs. Used only about 1/3 of the melt and can't wait to use it again. Love that the packaging lends itself to being reusable + easy to cleanup. Wish the price were a bit cheaper...

I love this so much I have resolved to make sure that I will keep multiples of this just in case I have a particularly difficult day. This has a soft citrus and lavender scent. When you put it in the (relatively hot) bath it turns the water a milky color and produces a little bit of bubbles. You can get 2 maybe 3 baths out of 1 melt. When it's thoroughly melted you're left with a muslin cloth bag full of pulpy oat bits that you can use as a body exfoliant. My skin has never felt so flippin soft. Well worth the $9(USD). A nifty little mini spa that I look forward to using often.

I wouldn't buy this particular melt again because I think Lush makes better melts than this one. Of course, Ceridwen's Cauldron isn't a bad melt- I'm just not a fan of the oats and dandelion bits that it releases, and I think it's a small catch for the money, especially when their other melts are bigger and just as good for the skin!