3-in-1 Concealer for Eyes 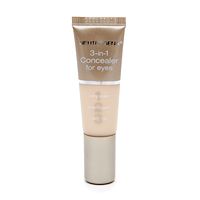 I purchased this product in 15 medium and I am not at all happy with it. The shade is too dark for my skin color and doesn't cover up my dark circles. It makes my eyes look hollow. I'll probably keep this around and see if it does any better in the summer, but right now it's just not working for me. It is very pigmented and you don't need a lot of product. If you're dark circles aren't that bad and you find a shade that matches you I think this'll be a great product for you.

After using this concealer for years in the past, I thought I'd give it a rebuy and retry since I was on the lookout for a new gentle concealer for my undereyes recently. The added SPF is a super bonus because it is hard to find nowadays in concealers, and especially with a physical sunscreen being used, the potential for irritation was lessened in result, which further appealed to me. Also, this concealer has a relatively short/basic ingredient list, which thus also made it ideal for sensitive skin. However, after purchasing this for a bit of an expense, I tried it only to see that the coloring was a bit off for my skintone, it was too thick, and it puffed my undereyes a bit. I have since discovered Maybelline Fit Me concealer, and it does not have any of these issues. Sad though, because I really wanted to find a simple SPF concealer as a bonus, but in the end, this did not work.

This concealer works well for me. It's creamy and smooth, and doesn't cake at all. Looks very natural for me. It gives my eyes that little bit of lift I need in the mornings. You have to be careful to pat it on, rather than rub it, because you can easily rub it away completely.

I had been using the neutrogena healthy skin stick concealer (pretty much the stick version of this) just because I liked it and was afraid to try something new. However, I had been noticing it was looking a little cake-y in the under eye area, so I bought this. For some reason I always imagined this having the coverage of a sheer tinted moisturizer, which I like the feel of but never offers enough coverage (imo). I was really surprised how well this covered my under eye circles without looking cake-y, it really doesn't look like I have make up on. It goes on pretty smooth (I use the neutrogena healthy skin eye cream to moisturize, which kind of makes it go on a little weird) and doesn't seem to budge after it's there. It isn't matte, but I don't think it looks too freakishly shiny either. I think with or without powder to set, it still looks great. I also tried this on a blemish and it covered very well. I wish I would have tried this years ago! I would definitely recommend this to anyone looking for a concealer with excellent coverage, and for around $10, it's a great price compared to high end brands.

This product totally surprised me. I have dark circles that really bug me and make wearing dark eye makeup impossible, so I take the matter of concealer seriously. Although I was already using (and not completely loving) a high end concealer, I bought this on a whim and was blown away. I put this on with mac's 224, and it really brightens my under eye area. It does need to be set with powder though, or else the finish stays shiny. The creamy concealer I was using before always darkened and creased up under my eyes within hours, whereas this concealer is light in texture, but offers moderate coverage AND brightens which really makes a difference. Although it doesn't offer as much initial coverage as a creamy, heavier concealer.. the overall effect is more desirable, because my under eye area looks much better through out the day. I have also tried layering this over a light application of the creamy concealer, and it works great.This concealer has totally changed my attitude about my face makeup. I'm sure there are higher end liquid concealers out there with more pigmentation, but this is a real drugstore gem. Oh, and I wouldn't be put off by reviews who claim this made their circles worse. If they're that bad, no concealer alone will cover them, you NEED corrector first.

I like this concealer a lot! I use the brightening eye perfector first and then dab a little of this under my eyes just to lighten the circles just a little bit more. It's not cakey, stays on all day, and blends really well. It is kind of expensive for such a small tube, but you don't need much at all so it kind of evens out when you think about it. The only thing I don't like is when I use in on my eyelids as a primer for my shadow or even just alone, it creases pretty bad. I usually don't put it on my eyelids but on days where I didn't get much sleep due to a teething toddler, I have to use it to cover the circles! Overall though, a good product!

My HG Concealer! Neutrogena 3 in 1 Concealer For Eyes in The color Medium I Picked Up at Walmart! Price Was Amazing because Im Used to Buying MAC Products. I Personally think this concealer is Amazing, i have the Mac studio sculpt concealer their concealer colors are always off, I dont know if they give the wrong color Im an Nc42 andI know they give you an nw shade for concealer but it looked darker under my eyes. So Back To My HG its Pefect It Brightens Up my under eyes and im Young (17) I dont Have Bad dark Circles At all. For Many Bashing this product Obviously Its a Light to medium coverage not full Coverage.If You wanted a Full a coverage it wasnt for you! If you have Subtle under eye circles this is it.It diffintly looks very natural unlike mac concealers and is VERY AFFORADBLE!!!

First of all, I would like to state that I have horrible dark gray-ish/purple-ish under-eye circles. That being said, a few weeks ago I went to Rite Aid to pick up something when I crossed the makeup section. Me being obsessed with makeup, I just had to stop and take a look. This is when I saw the Neutrogena 3-in-1 Concealer for Eyes. I don't know what made me buy the thing. It cost me about $10, which really is expensive for such a little tube. I instantly tried it on the second I went home, excited to have found a concealer and hopeful that it'd work on my horrid dark circles. Talk about a Big Mistake! Whatever little hope I had instantly vanished when I applied it. It had no effect on my dark circles whatsoever. Okay, maybe it turned it half a shade lighter, but that doesn't do anything, considering my dark circles are nearly black...Need I mention that I have fine lines as well? Besides the half-shade lighter result, the only thing that changed was how it felt under my eyes. It was REALLY uncomfortable--it felt like something thick, wet, and heavy was there. Ew! What a waste of $10! I could've easily bought something better with that, like ice cream! UPDATE 12/15/2011: So I found this little guy in the back of my makeup drawer and I decided to give it a another shot. It didn't work that well on my dark circles (go figure), but I found out that this "eye concealer" is a GREAT foundation! I dabbed some on my fingers and rubbed it in on my face (not hygenic, but I don't care), and BAM! My face had a lovely "glow", and it covered up some of my blemishes too! The only downside is that after a few hours I had to apply some powder, but that's pretty much it. I upgraded this to 3 lipsticks (minus 2 because this product is still over-priced and it doesn't do what it's supposed to). UPDATE 12/19/11: I am upgrading this product to 4 lispticks, because this product doesn't break me out! Which is a HUGE deal for me! I've used Revlon ColorStay powder, MAC Mineralize Skinfinish powder, and MAC Studio Fix powder, and all of them have broken me out terribly...but this doesn't! :D

I LOVE LOVE LOVE this concealer. I've been using about 3 years already. The color I use is light. Okay if your getting creases it probably because you're applying it wrong. You should make sure you warn it up before applying so it wont be too candy. What I do is sometimes put on wrist and rub a little so my heat can warm it up or I put enough for both my under eye circles on my index finger and rub a little in other index finger so its warmed up then put on under eyes. OKAY here's the main part. You don't rub your concealer on, you dab it on, so while dabbing under eyes you must look up cuz when you look up it doesn't cause crease. Just keep drabbing till dry. Then apply to lid, I just rub on my lid though. I also sometimes put on my scars or blemishes. But for now this my absolute favorite. The eye cream and SPF is a plus :)

I purchased this product @ Target and would be great for my undereye circles,but thru out the day it seemed it had a reddish tint to it?I had the color Medium.But overall it covered quite well and you need only very little to cover large areas under eye areas.