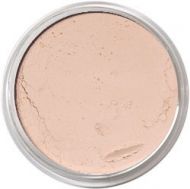 I use this bronzer as my eyeshadow. It comes out really great like a brown-taupey colour. I love it!

I just got a sample of this, and I like that it doesn't have much shimmer to it. It leaves a very natural looking sun-kissed color. Not at all muddy or orange, which is a problem for me with a lot of bronzers out there. This is great for us fair skinned gals, but may not show up well if your skin is medium to dark. I think for summer I may mix in a little of the everyday bronzer, just for a little more intensity. Will repurchase.

I have a sample pot of this. I really like it. I have fair-ish skin and this shows up on me without looking muddy, orange, red, pink or sparkly. I guess it's a beigey colour, a VERY soft bronzer, but it's extremely flattering on. I'd say it gives me more of a healthy glow than a bronzed look, which is what I'm aiming for these days anyway. I also add a tiny bit to my foundation (currently using Medium Cool) to make it a smidgen darker and match my skin perfectly. Ideal for pale autumn/winter skin. UPDATE May 07: Have just ordered a full-size jar of this though I haven't yet finished my sample size. It's gorgeous and makes me look really radiant. Worth 5 lippies.

I have searched high and low for a bronzer that was not too orangey, too pink, too sheer, too sparkley, too opaque, too Elvira-ish. I have paid top of the line department store prices and drugstore bargain prices. This is, hands down, the best bronzer/blush/skin resurrector ever. I have to pale my skin down to cover all the little freckes and old marks and skin imperfections. Then, I use this to direct the color where I want it, back over my cheeks, across the top of my nose and my eyelids. The result looks like natural and refreshed skin. amazing. I have been thrilled with just about every Everday Minerals sample I have tried so far. Great products.

LOVE this bronzer. I am extremely pale with yellow undertones and this barely shows up. It's very subtle, but flattering. No glitter or chalky matteness either- just natural-skin looking

Light beigey gold. Has a subtle shimmer. Colour is also subtle. It barely shows up on my skin, even though i'm quite pale.

A lovely bronzer for a fair-skinned girl like me. A beautiful, natural, neutral shade. Not glittery at all. Love it!

I was sort of shocked when I decided to buy this-- I've never found a bronzer that looked anything near good on me. Even this product-- I got the sample, tried it once, half-heartedly, then forgot about it. Luckily, I revisited it later, because this is one that is quickly becoming a staple.&lt;br&gt;&lt;br&gt;As I'm sure many girls besides me have noticed, mineral make-up has great coverage... almost too good, in that you tend to end up one color all over. I didn't use blush or bronzer at first, simply because I had not needed to before, with liquid foundation. Eventually, apple blush won me as a convert, as did Nick-Nack (for a more subtle effect). This bronzer works great combined with either of these, or alone. I want to use it everyday, which is very unusual for me.&lt;br&gt;&lt;br&gt;So, what's so great about this bronzer? It doesn't turn orange. It's not shimmery. It just gives me a natural, healthy, fantastic, attractive glow... I KNOW! Like every bronzer advertisement you've ever heard... except it actually does what it says! I've never had that happen before! I can't even explain how flattering this is on. It doesn't look brown on me, which is what I was expecting. And it really doesn't look like I'm wearing blush/ bronzer, which is a huge plus... my skin just looks really great and un-made up! I use the &quot;double c&quot; method of application-- sweeping a brush with a small amount of bronzer across cheekbones, around outer eye area, and across forehead to the center of the face, like a &quot;c&quot;, then repeat on the other side. This stuff is pigmented, so a little dab'll do ya!&lt;br&gt;I'm sure it would also be a fabulous light brown eyeshadow, but I don't wear eyeshadow very often (maybe 4x in the last 6 months?), so I haven't tried it in this capacity. &lt;br&gt;&lt;br&gt;There is a caveat-- this is for the light ladies only. I wear fair neutral (intensive). The soft bronzer is an almost exact color match to fairly light neutral intensive [I literally cannot tell these two apart when they're next to each other!], so if you are that shade or darker it will not show up on you at all.&lt;br&gt;This is a definite purchase and repurchase, should I ever run out! Highly recommended for my fellow PPPs!

I really like this. It's a nice shade for fair skin tones (I'm about a Golden Fair in EM shades). Something about this goes with my skin tone perfectly - it's very neutral. It's sheer, non-shimmery, and very natural looking, with no orange or red undertones. The EM foundations don't work for me, my skin's just too dry, but I like this bronzer. I probably wouldn't repurchase unless it became available in a pressed formulation though, just for ease of use. There are also reviews for this shade under the 'Everyday Bronzer' heading (the Everyday Bronzer is just one shade though). There are three separate EM bronzers: Everyday, Soft and Sparkle.