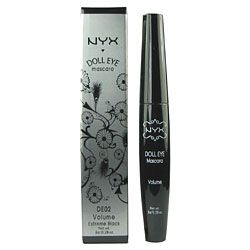 Below average mascara. Almost immediately I noticed a fall out onto my cheekbones which continued through out the day.I didn't notice any volumizing effect, clumps lashes together and doesn't hold curl at all

Let me just start of by saying this has to be one of the worst mascaras I've tried. I bought this tube after reading rave reviews here and other places(which i dont get btw), so when it was on sale i was quick to get one. You could say my expectations were kinda high but this quality is what i expect from 1$ macaras(most 1$ mascaras I've tried are better than this, just saying). First of all the brush, its hard to coat your lashes equally, the design of the brush makes it pick up too much product one some parts, this is of course manageable but still a hastle. Lenght and volume-wise its decent, but it doesn't curl or separate your lashes, you have to use another brush or spoolie to get any separation. But the worst part is the flaking and smudging, im not kidding i wore this yesterday and less than 30 minutes after application there was soo much flaking, the kind that you would expect after 6 hours but not 30 minutes! I didnt pay too much for this mascara(thank god) but its still a waste of money, going in the trash.

I like the Doll Eye long lash so I decided to try this to see if there was much of a difference. There was. I am not fond of this one at all. It does nothing but darkens my lashes. I have to add many coats to build it up in order to get decent volume and any length. I also find it can become a little flaky. Not completely terrible but does not do much.

Good mascara. It's not going to give you doll eyes. But don't call consumer protection, because it's a good mascara and we don't want it to be discontinued. And of course, who knows what type of doll. Maybe it's a doll with normal, human looking lashes. Not terribly volumized, not terribly long, but at least they are eyelashes. Better than without. Right? RIGHT?

I hated this mascara when I first bought it, but as I improved my mascara skills I found that it gave me very fluttery, curled clump free lashes that live up to the name. I especially love it on my lower lashes. This is not a lengthening mascara, that's for sure, but it doesn't claim to be. Now my complaints: the tube is flimsy, thin plastic and won't close all the way. And the price...I just don't feel like this mascara is worth $10. There's much less product than most drugstore mascaras. Just as I started to love this mascara, I ran out of product. I thought maybe it dried out, but even when I hydrated it good as new with eye drops - nope, all gone! But if I can find this a few dollars cheaper, I'll buy it again.

I recently decided to try this again in my search for a non allergenic mascara. I used this years ago alternating with my high end brands and it gave very nice length. I probably will not bother buying this again because I don't find it as good as it used to be. No irritation yet, but it was very dry and I had to keep brushing it on over and over to give any acceptable results. Even then it is a natural look, not doll eyes at all. There is no volume, just some length and separation. Of the few that don't irritate my lids, this is the least useful. It does not create lush eyelashes and it hardly works at all on the lower lashes. To be fair, it is better than most of the other NYX mascaras I've tried - except Propel My Lashes which was good. It's just not a great mascara anymore. Update: I see that the new NYX displays have no mascaras at all, which is alarming. Are they phasing out mascaras to concentrate on everything else? Why? I'd try them again if they came out with a new formula.

Oh my gosh, this mascara is the worst one I've ever tried. Seriously. I know waterproof mascaras are better at holding a curl and this one is not waterproof ( I think ). However, this mascara literally makes my eyelashes droop down. My lashes are naturally extremely long. I hate clumpy eyelashes and I don't look for one that elongates my lashes too too much. My eyelashes naturally can hold a curl for at least 10 hours. But when I used this for the first and for the second time, the curl is gone as soon as I apply this crappy mascara. Also, this mascara is clumpy by the second coat. Very. Clumpy. Yes, I'm on a rant here. But the quality of this mascara is so poor. DO NOT WASTE YOUR MONEY. This is not worth a cent. This is definitely going to the trash. (And I just purchased this today)

I am extremely disappointed in this mascara. I expected it to hold my eyelashes up and give it nice curl. It didn't do what I thought it would and was a clumpy mess. The formula is really dry and it does nothing but make my eyelashes stick together. I really wanted to love it but I don't. BTW I have straight eyelashes that aren't curled and I use an eyelash curler. Hopefully the waterproof version will work but I doubt I'll try it since its expensive.

I am a fan of most NYX products, but this is one I didn't like. I purchased the Doll Eye Lengthening mascara and it didn't do much for me. I thought maybe this type would add more product and volume, but this one did not deliver either. I got the same results where it did not add much to what i already have. I like a more full bodied mascara and this does not provide that. While it might work for somebody with sparse lashes (mine are plentiful) or somebody who wants a more natural look (I like a little drama) this just is not for me. It did however have great staying power, no flaking or smudging. But it also was harder to remove than most non-waterproof mascaras.