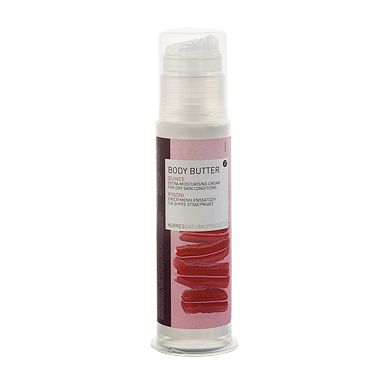 I'm only just getting into Korres products after hearing a lot about them from a number of YouTube beauty bloggers. I've tried a couple of the shower gels, so wanted to give a body cream a try too and chose this one because I liked the idea of a Quince scented body butter (I figured it wouldn't be too strong or overpowering). As body butters go, this is ok and does a reasonable job of moisturising my skin. However, I would question whether this can actually be called a butter as in my opinion it's closer to a cream than a butter. Also, I always think of butters coming in tubs not tubes (the idea being they're too thick to squeeze out of a tube) and this definitely isn't as thick as some body butters I've used. Having said that though, it does apply very well, sinks into my skin without leaving it feeling greasy and my skin did feel softer after using it so maybe it IS a butter after all! The one downside to this product is the smell. As another reviewer said, this has a very sickly-sweet smell to it, almost like fruit that has gone off. It's for this reason that I would question whether to purchase again, as although it didn't seem to linger on my skin once it was applied, the smell whilst applying it wasn't pleasant. However, if you can get past this or don't really mind, I would recommend giving it a try.

I'm surprised by all of the good reviews for this product. I have somewhat dry skin and this barely moisturised it at all. I'm not too keen on the smell either, which is both sickly sweet and sour like fruit that's past its sell-by date. The only positive I can think of is the pump packaging which is very hygienic.

This was a really good and moisturizing product. I was really satisfied and I could feel my skin becoming softer and more hydrated each day.

This is a very thick and creamy body butter. It takes a while to get absorbed into my skin, thicker than Lush's dream cream. I have very dry skin and I prefer moisturizers that's on the thicker side but this is even alittle too thick for me. It is very moisturizing and leaves my skin smooth and soft. The scent is fresh, not great but just ok for me, disappears after a while. Container is a pump dispenser, very convenient and sanitary. Does not contain harmful ingredients like mineral oil, parabens etc This is pretty expensive but totally worth it if you have extremely dry skin and needed a heavy duty moisturizer. Or you can use it on very dry areas like elbows, knees etc

Just when I thought I have encountered every ingredient for body lotions imaginable, Korres came out with a surprise. I didn't even known what &quot;quince&quot; is, but I had to get it. Delightfully rich both in terms of smell and texture. My only complaint is that it is expensive and I go through one bottle quickly.

Korres body butters are a thick cream that leaves my skin soft and moisturized. It absorbs well without feeling greasy like L'Occitane shea butter ultra rich cream did. Quince is a nice scent - I like it; I don't love it. I'm going to try other body butter scents to see if I do find one I love, but if not, I'm happy to repurchase Quince again.

I had high hopes for this body butter, having very dry skin especially on my shins. But frankly, it disappointed me. The texture is quite thick and creamy, yet I didn't find it particularly moisturizing, and while I liked the scent upon first application, I now find that it disturbs my nose. So far, the best body cream for me has been Mama Mio Omega Super-rich Bodycream, which really delivers. *edit* One month later, and I'm adding one lippie. This bodybutter is OK for moisturizing my shins, but I probably won't repurchase because I prefer more lightly scented creams and lotions.

I like the lotion (it moisturizes and does what it promises to do) but I HATE the smell. Seriuously, it smells like Windex. I only use it on the parts of body that are farthest from my nose (like my feet) and I still smell it -_- I won't be buying this again.

I love the korres brand and love their body butters!! It's really the only moisturizers I've come across that make my skin soft!! I love it!! This one is my fav. since it smells so good!! My only complaint is that they are pricey for what you get. They run out fast if you use it all over. So for that reason, I use only occasionally and use cheaper stuff.

i love the smell of this body butter. it makes me happy every time i put it on &amp; it's so moisturizing. the only thing i don't like about it is that it doesn't absorb very quickly into my skin so it sits on top of my skin for a while. i usually use it at night &amp; by morning, my skin is supple and moisturized!