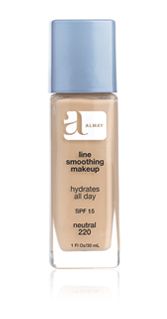 I got this from an outlet for about $6, although I would have preferred the clear complexion, there was none:(. I have this in 140 buff and I LOVE THIS FOUNDATION! I have pretty dry skin and it does feel hydrating on my skin and my skin looks dewy, which I prefer. It doesn't look chalky, which most foundations do on my skin and it feels like your wearing nothing. There is a scent but it smells soooo good! The yellow tone in buff makes this the PERFECT match to my skin. Also the consistency is perfect, its thick enough to cover, thin enough to work with a bit and looks great all day Down sides: -I would prefer more coverage -comes off pretty easily (you can't touch your face, or it'll rub off) -No pump, sorta messy, kinda hard to get out, but I use my foundation brush to get whats on the lid.

I am of neutral-cool fair complexion with pretty good skin. I don't wear foundation daily -- just when I'm particularly red or blotchy (thank you, hormones), or if I'm going out and/or want a little extra gravitas. I picked this up (in Buff, which is pretty seasonally universal for me) because moisturizing foundations are generally light, and I previously liked the (apparently dc'd) Almay Nearly Naked liquid. To be honest, I can't really tell a huge difference between Line Smoothing and Nearly Naked -- both are fairly moisturizing (or at least non-drying) with sheer coverage. Line Smoothing seems to be a creamier consistency, however, which makes it a little more miserable to apply. On dry skin, this is a disaster -- totally exacerbates lines and dry patches and is hard to blend. However I love this mixed 50/50 with my BWC daily moisturizer and applied to a damp, freshly washed face. Takes a couple seconds to work out the streaks, but once that's taken care of it seems to sink in nicely. Definitely a sheer makeup for people who just need some minimal perfecting -- I can't imagine this being great if I actually needed coverage -- but still want their skin to look like, you know, skin. As mentioned, the bottle is stupid for such a thick creme, and I also happen to think that circa $14USD for such a small bottle of drug-store foundation that doesn't do anything spectacular and needs to be turned into a tinted moisturizer for best results is, frankly, too expensive. Nevertheless, I do like the results and so I would likely purchase again, based on that. I sincerely doubt, however, that I will *actually* repurchase this particular foundation once I finally run out of my current bottle (it'll take a while). I just basically think it worthy of a re-buy.

I managed to find a color that matches my skin very well (surprisingly beige, even though I am very fair skinned). However, this product is still too drying. Also, when I apply it it precipitated and creates rolls of it around hairline and eyes. Yikes! I used Borghese tinted moisturizer before (~$30) and never had this effect. I have to scrub these precipitates with a tissue. What's the point of using the foundation that you have to clean off? The bottle does not have a pump, so you have to shake it upside down to get enough on your finger. I will not buy this product again

This product contains erythrulose which is a self-tanning product. I wrote Almay to find out why they put it in a foundation. I received no response. I called Almay and no one returned my call. I refuse to use a foundation that tans my face gradually, especially when the lable doesn't tell me so. This ingredient takes a couple days to change skin color and most people remove foundation at the end of the day. However, I am not going to take the chance of using a product that might tan my skin. The whole purpose of this website is to avoid tanning and I don't like the tanned look. I will not re-purchase. There are not any other redeemable qualities about this product.

First of all, this in one of the very few foundations that come in a shade that is light enough for me, and not yellow. It has a very nice natural light coverage, still need concealer for undereyes, but the skin looks even and not covered in makeup. In the summer and fall, I did not use it as much, as it would tend to make my skin look dry. Maybe I'm moisturizing better now, or it could be that I don't use any powder over it, but it is looking very good these days. Yes, it dries to a natural matte natural finish on me, no powder needed. Sometimes I can feel slight discomfort from something in the formula (the sunscreen?) as I apply it, but it is very slight. In a way I want to give it a 5 because of the pale enough shade and natural coverage, but I feel that it could be a bit more long lasting.

I have mixed feelings about this product. Sometimes its very nice and blends perfectly. Once the foundaton made my skin looked red and irritated. It is 11-15 dollars at any drug store so it is expensive. Also I have to agree that the tube of the foundation sucks but if you use a Q-tip it should work fine.

I like this foundation but it sometimes makes my skin dry. I always put avocado oil or a little baby oil before I apply foundation that way it doesn't make my skin dry and also does not give me uneven skin tone. The price is just right and I have a olive skin tone and the color 240 (beige) totally compliments my skin. I will get back after a months use and let y'all know.

SkinVery Dry, Medium, Not Sure

I love this foundation!! As everyone has said the bottle is annoying, but I've found if you store it lying down it works just fine :) that way when you're ready to apply your foundation the product comes out MUCH faster. If you've tried the clear complexion foundation by almay, this line smoothing one is thicker, so it's harder to get out than that one. But like I said, ever since I've been storing it lying down it's not a problem. anyways: great coverage & doesn't dry out my skin. It blends in sooo nicely, and the colour match is fantastic for me. AND it lasts all day! maybe one touch up if you've really been touching your face or something... but seriously overall it's fantastic! as far as line smoothing goes, I can't really comment on that. hope this helped! feel free to message me with any questions :)

I've never really tried too hard to find myself a liquid foundation, because I never felt the need to "cover up" my face with it. However, I noticed my face to be getting dry patches in odd places, and figured that it was time to invest in a foundation with an SPF (of 15) and moisturizing qualities. Because I've used Almay makeup before, I decided to check this out first because I know it's Hypoallergenic and Non-Comedogenic (won't clog pores). Trying out the colours in the store (even under the bad lights) I came to the conclusion that "Naked 160" was for me. I brought it back to my dormitory where I promptly removed my makeup and tried it out. While not creating a very matte and opaque finish, I was pleased that it was still sheer enough that it didn't look like I was wearing makeup, and gave me a dewy, healthy glow. I used a foundation brush to apply the product directly to my dry patches, applying it thicker there, and letting it settle for a few minutes before smoothing it out lightly. The rest of my face I stippled with a dual-fibre brush, and the results were AMAZING. My face feels like there's nothing on it, it feels moisturized and it matches my skin tone to a T. It's not too yellow, it's not too pink. It doesn't leave my face shiny, but leaves an almost-dewy glow. It doesn't dry to a powdery finish - which I like, because it doesn't emphasize or make the dry spots stand out (like a powder foundation would). It camoflauges redness very well, even despite being sheer. It's not a very buildable product, but I think it's intentionally made to be of sheer coverage. My face (to the touch) does feel like I have some makeup on it....but it's not a disgusting feel. It hides dryness, lines and pores VERY well in my opinion - and if all goes well (to the end of the bottle) I will re-purchase this product. My only complaint is the packaging. It would be more convenient to have a pump or something to help dispense the product....I'm going to have to find a better way to get the product out of the bottle at some point. But if you can work your way around the difficult packaging, I hope you can be as pleased with this product as I am.

pleasantly surprised by this, got it as a sample in a swap I use this on the side of my nose to cover redness, staying power is surprisingly good!...i powder over it though...but good...i went biking and my face was like a puddle of sweat...this was still on, and looked like i just applied it..covers my redness real good, and for me doesnt sink into my huge pores on my nose.. i like this