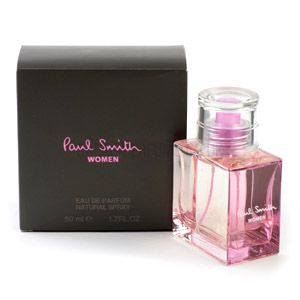 Every Paul Smith fragrance I have tried I have adored but I have never tried Woman up until now. It is a shame I waited so long because I really love it. It's a nice springtime floral scent. Not to original or groundbreaking but lovely nonetheless. Maybe a little like a mens floral scented aftershave. I went into a store the other day while wearing Paul Smith Woman and she said she loved my cologne. Ha!! Just a nice, sunny, springtime, floral scent.

gorgeous and long lasting. always get asked what perfume i'm wearing when wearing this.

I first tried this 8 years ago and forgot about it for a few years. I recently purchased a new one because the familiar scent drew back good memories. I am biased for sure. I don't think this is the greatest scent ever but it smells so comfortable - sexy in a strong independent way yet approahable with that flowery undertone. I'm not a fan of scents that are too girly so this one really works for me. To me, I feel that the scent is quite special and smells very different from many other scents.

This is quite a masculine fragrance and it could definately be mistaken for a mild aftershave of some sort. I quite like the smell though and I do get compliments when I wear it.

its quite masculine but really nice was my winter fragrance at the start of the year...some people dont like it though....id say it could kind of pass for a man smell... i like it because its much more different that ordinary women fragrances....but its not my fav

I completely agree with the comments below regarding the initial smell when it is first sprayed as I think it is horrible too, far too cloying and aggressive but after a few minutes once the top notes have evaporated it leaves a beautiful, warm, unique, subtle aroma that makes me want to smell my wrist for hours on end. However, it is just a little too subtle as it only ever lasts a couple hours on me which is pretty depressing as I really love it. So I put that I wouldn't buy it again as there's not much point even though I wish there was! Paul Smith - make it stay longer on me!

There seems to be some confusion about the name of this perfume. My bottle definitely calls it &quot;Women&quot; - plural. But it's on MUA as &quot;Woman&quot; and I've seen it elsewhere on the internet referred to as &quot;Woman&quot; but I'm pretty sure we're talking about the same thing. I guess &quot;Woman&quot; sounds a more likely name for a frangrance than the plural. I have the eau de parfum, 30 ml. It comes in a chunky square bottle, the perfume is pink, and it has a round glass screw top lid. One of the appealing factors was the size of the bottle - I like something small so it's not too heavy to carry in a handbag. I did test it before I bought it, along with 2 or 3 other fragrances. I tried them on a paper spill each and kept returning to them throughout the day. I liked Women best and it seemd to be longer lasting than the others. It's described on Fragrance Direct (where I often buy my perfume) as &quot;gentle, elegant aromatic blend of peppercorns, cedar and vetiver and a subtle bouquet of freesia, lily of the valley and geranium give a warm, distinctly English floral fragrance. &quot; When I came to wear it on myself I was immediately disappointed. It didn't seem to have any kick - very wishy washy and faint. During the course of the day it mellowed into something rather nicer and did seem to last reasonably well.. However, I have been wearing it every day since and now I just don't seem to be able to smell it after the first 5 minutes at all. I often seem to get this with fragrances. It may be just me - as I've got accustomed to the fragrance I can't smell it anymore. No idea if anyone else can catch it - I haven't received any comments at all. I doubt that I shall buy it again as it seems a waste of money under the circumstances.

Paul Smith Woman is.. unique. I'd say it's rather &quot;salty&quot;, and not &quot;floral&quot; at all, as it reminds me so much of Chinese preserved prune. Not something common, and I think it's not offensive; but I don't think anyone can grow old with this scent.. it's too.. funky. :)

Really like this floral. It is very different on everyone that wears it. I like it because no one knows what perfume this is. It really makes me feel funky (in a good way). I like to wear this when I wear all black. It just seems to fit. It might be a little heady, but I like perfumes that are unique and interesting. Not for everyone though. Try before you buy, not everyone likes this.

This is a wonderful fragrance. Really underrated. The pink Bottle is an attraction anyway for me and i love this floral classiness that is not heady but leaves you wanting more. I highly recemmend it and i'm shocked at the low ratings!