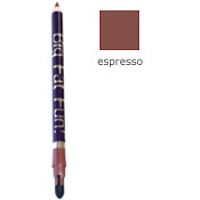 HG eyeliner, period. The glide is perfect, lasts forever, doesn't fade or flake, works on waterline/tightline and eyelid, comes in great colors, not expensive, travels well, easy to sharpen, mostly waterproof, just everything good about eyeliner is in these pencils! I only say &quot;mostly&quot; waterproof because they lasted through my bawling during my wedding and through an intense workout, but not through showering or washing my face with mild soap without smudging. I would highly recommend these to everyone that loves eyeliner pencils. I've tried loads of brands and kinds, and these are the best.

By far the best eyeliner I have ever used and will continue to use! I started using it in 2007 managing a salon. They came in free on some hair product but we took them off and put them in my employees stockings. I have tried a ton of other brands and no one matches up. I will continue to hunt this down or beg a salon professional to go get it for me at Cosmo Prof. It is affordable, lasts a long time, and the smudgie is amazing for softening the look. Smooth as butter when applying and does not fade or run! Hands down my favorite eyeliner, even compared to HE brands!

hands down, the best eyeliner i have ever used - and that's saying something. having worn eyeliner daily since i was 13 (i'm almost 22!) i've tried a lot of them. this is the smoothest eyeliner to apply that i've ever used - no dragging on your eyelid and making your eyes water!! it stays put on your eyes, and also lasts for ages. i usually go through eyeliner pretty fast, but as there's the smudger on the bottom of the pencil i found i didn't need to use as much. i've used the benefit eyeliners with the smudger at the bottom before, but i found the tigi smudger is much softer and kinder to your eyes and glides better over the eye line. i got this given to me from my mum's beauty therapist and haven't been able to find it anywhere since.. send me a message if you know where to get the black version in the uk :) x

These eyeliners are great! I have the espresso color, and it is a beautiful very rich, dark brown. I absolutely love this color!! If you use the smudger at the end to blend out the liner, it stays put for several hours. It is very creamy and goes on so easily. My cons would be that after a long day, it will smudge a little bit - the staying power isn't perfect. Also, because the pencil is &quot;fat&quot;, it is kind of hard to sharpen. If you want a very thin, subtle line, this is probably not the liner for you. At least, I am not able to do this! Overall, this is an amazing pencil, and I plan to buy the black one and repurchase the brown when I run out!

I got mine at a trade show for about $5 a pop. I think they retail for $16 each? These are HG. I only use liquid liner but when I run out, these are my go to! They do w.e. you want them to.. glides on easily, blends, smudges when you want it to but stays put all day. PROS: -glides on smooth -stays on all day -no need to warm it up with your hands -comes with a smudgie -colours are GREAT!!!

The application is smooth and it have smudge tip on the other end, so it is practical if I want a softer look. It last longer and I definitely recommend it!

Well, how should I start? This is my 1st time reviewing a product. I have always done a lot of research on MUA before making my purchase, but rarely have the urge to write in my own comment on any products (despite the fact that I never have enough room on my dressing table to store all my makeup stuffs). Seeing one of my HG items doesn't have that much credit as it deserves really breaks my heart. This item came to my realm from a recommendation of my bestie - who is a makeup sucker herself :) I'm a born messy, can't hardly draw anything, not to mention a tiny line on eyelids. My hands are not steady, so I would never think of buying liquid eyeliners. At first I was hesitant to grab this, assuming that it's gonna end up sitting of the bottom of my drawer like other expensive but useless Dior Snow, Lancome or Estee Lauder pencils. But I was convinced by my frd, she has such smouldered eyes, which enhances her makeup a lot. So I was sold, and I'm so glad that I did. For the 1st time, I can draw a smooth perfect line. The application goes on so effortlessly. It's the only product that deserve the name &quot;automatic&quot; liners which many claim to have but they don't!!! Before that I always thought that I might poke my eyes one day when trying to press the pencils so that the line will show up, but with this, just a gentle stroke and voila! I agree with some others that it's the hybrid between gel and cream, which makes the colors so out-standing and long-lasting. It doesn't smudge at all on my oily lids (FYI, i use Mac's Prep Prime Eye underneath, my eyeshadows fade sometimes still but not the liners). The smudger on the other end comes in handy when I want to creat a quick smokey look. Just draw a thick line, smudge it out, add some dark shadow on top of that to make the color more vibrant and some highlighter beneath the eyebrows and corners of the eyes and you are good to go. Thanks to this Big Fat Fun, I gain my confidence that every girl can beautify themselves and yes, makeup makes magic ;)

I got this as a GWP with a hair product months ago and then decided to use it yesterday, since I was out of my usual brown liner from Cover Girl. Wow, is there a difference! I have this one in the Espresso color, an extremely dark brown. This eyeliner is creamy, smooth as butter to apply, and doesn't BUDGE! I couldn't believe it - I figured if it was that easy to get on, it would smudge like crazy, but it doesn't - Smokes out beautifully, too - such a perfect product - and then removes easily with my L'Oreal eye makeup remover. Mine doesn't have a smudger at the end, which is my only complaint - I wish it did, as hunting for a q-tip sometimes gets a little old. Maybe the regular pencils do, I don't know. Will repurchase. Is now a HG product for me, totally by accident.

I like this liner for it's silky application and it does not irritate my contacts. Kinda pricy but it has lasted for over a year now. I use the black shade, the smudger makes it a softer look. I also use Wet-n-Wild's creme liner, alternating these two. I'll repurchase this pencil liner!

BEST EYELINER EVER. ive been using loreal hip cream eyeliner in the jar, because i like blacker than black eyeliners, and this was the darkest until I got this. I went to my local cosmo prof for hair color, saw this, used the tester on my hand and wow... fell in love smooth, wonderful, blackest black. I bought out their stock of three. used it on my waterline as soon as i got home, and wonderful! words can't describe this HG eyeliner.