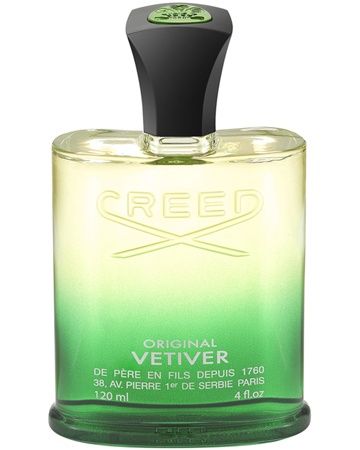 I really enjoy vetiver as a note--it's so crisp, dry, and woody!! This one is no exception. Very fresh, crisp, a burst of citrus but my skin really brings out the iris, vetiver, and ginger combo more than anything else. My only beef with this is that longevity and projection are both fairly low--you know you expect more from a Creed. I managed to get a great deal, so I am not going to complain about that. :D I enjoy the scent and it is very clean without venturing into aftershave territory. Definitely unisex. (crosspost)

I'm a woman, and one who rarely or almost never finds men's scents unisex, but this was really nice. This is pretty close to the scent of Ivory soap. I've already tried Demeter Pure Soap and realized that I like the Ivory soap thing but it's not for me, but I think this might have been closer. I never would have expected ginger and vetiver to smell soapy, but even though musk isn't listed in the notes this seemed to give off a clean musk feel. I gave it a four because it just wasn't for me, but it was nice.

I don't think I'd wear this personally but would love to smell it on my man. Great, soapy vetiver scent. Simple yet sexy. I love this one!

Great perfume! Guess what? It might be on the Creed men fragrance line but women can wear it as well (sorry, guys). I am stealing it from my boyfriend all the time and I get compliments on the scent. It's a very rejuvenating fragrance, the kind of scent that makes you feel clean and fresh. It last a long time and it makes you feel good (at least it makes me feel good, I wear it when I need to kick up my mood). Of course, I absolutely love it on my boyfriend as well. It's more of a daytime fragrance and it's great.

Many years ago my family had a guest over for dinner who was wearing a cologne so compelling I asked him what it was. &quot;Vetiver,&quot; he said. &quot;By Guerlain.&quot; It became the scent I wore during college and my first year of grad school. And it has fixed associations with that time. Although they are mostly pleasant, wearing it makes me feel like I'm in a time machine and I actually prefer life the way it is now. So, a great frag I no longer wear. Which means I'm always looking for a great substitute. Now, Creed, which I think makes a few great frags, has been making a frag called &quot;Vetiver&quot; for decades. As any Creed rep will explain, it was JFK's favorite. That scent, which i happen to like and own, has its charms but the smell of vetiver is not among them; dogs trained to sniff this fragrant grass would pass a barrel of Creed's Vetiver without so much as a bark or whimper. Enter Olivier Creed, who brings us a new Vetiver he confusingly calls Original Vetiver, in a pretty green bottle. This, too, smells like it contains no vetiver, though it's possible that a truck bearing some bales of vetiver rolled down the avenue outside the Creed laboratory when they were working on this. It smells very much like expensive soap. There is a woodsy floral note that develops somewhat and stays linear from start to finish. If you're after vetiver, avoid Creed's renditions in favor of Guerlain or Etro, both of which are excellent. If you're a fan of Creed, by all means smell this and the first one they made (which they now refer to as &quot;Classic Vetiver&quot;) and see what you think. They might stand on their own for you, as they did for me--I bought one of each, in succession, but, having spent lots of time with each, found they weren't that interesting to warrant replenishing my supply.

I Love, love, LOVE this scent. Clean, herbal, fresh. This can be worn by men, but I love it on me - I like the slight sexiness the masculine aspect gives it on a woman. Just perfect!

Though I think it is a nice fragrance.....it's not for me. Since I am a woman, I will stick with more feminine fragrances and will leave this for the guys. I can see a sporty young man wearing this though.

This is a very nice citrusy, green soapy smelling scent that's perfect for warm summer days. I also find it has a lot in common with cheaper priced Mugler Cologne which I also have a bottle of. However, the more I dab my OV sample on me, the more I'm loving this fragrance! OV is much richer smelling than MC and has nice, strong citrus topnotes that MC doesn't really have. After a side by side comparison Original Vetiver is much better smelling on my skin as well as longer lasting. (which should be the case considering it's price) Overall this is easily one of my favorite Creed offerings.

The soapiness of this fragrance evens out what often is a very edge-y scent. It isn't quite as earthy as, say, Villoresi, but it makes for a very clean fragrance for both men and women. The effect somewhat reminds me of Acqua di Parma Colonia Assoluta.

What a shocker! I half expected to like this for men, but never imagined in a million that I would like it on me. This is actually the first fragrance I would classify as capable of being worn by both men and women. It does start off with a fairly typical, masculine sort of cologne smell to it (I wonder why?), but then dries down into a clean, refreshing, dare I say pretty, fragrance. And I thought I did not like vetiver! With the weather hitting the mid-30s, wearing this feels like a splash in a cool pool. My usual fragrances are a little sweet and sticky feeling for the summer but this could be the perfect antidote. I am stunned: worlds have collided. I just may have to buy a full bottle, even though I know this is probably just summer madness. Luckily, my husband really likes it too (as did some friends) so I will be able to pass it on to him when September comes.