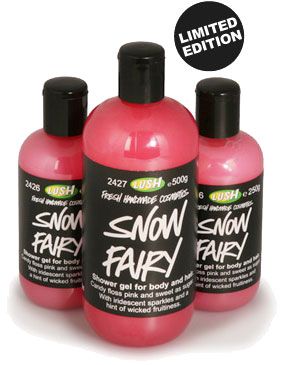 This product was just like a normal shower gel really I didn't get a drastic difference at all . Everyone seems to rave about the smell but in my opinion it gives me a bit of a head ache and makes me feel a bit sickly. It's not really creamy or anything but I love the bubble gum pink colour and the little shimmers it has in it . I think the product was built up to better than it is so I properly won't be repurchasing

This smells like pure sugar- it is one of the most saccharine scents I have ever come across. Every year I smell this when I go to do some Christmas shopping at Lush, and each year I feel faintly unwell and put it back down. I received the smallest bottle for Christmas this year, and have used it twice because it is too cute to waste. It's sparkly and pink, very much a frivolous and fun product. Snow Fairy WILL fill your bathroom with a ferocious miasma of sweetness and turn the bathroom into an olfactory assault chamber. This lasts for hours after you bathe. This may be a good thing if you are one of the people who just can't get enough Snow Fairy. My boyfriend however, asked whether I would be &quot;using it every night?&quot; with trepidation- it is not a scent that you can ignore. Thankfully on the skin, the scent is very faint and pleasant. It also doesn't make my sensitive skin dry or itchy. The second time I used it, I found the scent a bit less confronting. For these reasons, I will use it up. It's a good product, just not for me.

I was recommended this because I like rock star soap but this smells like sugar and artificial pears and looks like antacid. I'm not a fan. It is pretty moisturizing and the fragrance doesn't linger on your skin (thank goodness!) but it is very expensive and isnt packed with natural ingredients like most lush stuff.

buy this every year without fail.. I adore the sickly sweet smell and makes my skin feel lovely. lingers on the skin..personally my absolute faveourite shower gel of all time :) highly recommend if you love sweet smells

Smells exactly like LUSH's popular Bubblegum lip scrub. While I personally love that lip scrub, I don't fancy my body to be smell like...well, bubblegum. But of course, this is my personal preference. If you love anything sweet and sugary then this shower gel is for you! Or at least give this LE Christmas product a try.

I'm not very consistent with my shower gels - I always like to switch it up each month and give my nose a variety of scented treats to indulge in each morning for my shower routine. Lush recently came out with their Christmas range and I decided to get Snow Fairy Shower Gel with Grass (which smells like it sounds!). Snow Fairy may not be everyone - it's very sweet and the smell reminds me of a Victorian Sweet Shop or (more specifically) pear drops. When I'm feeling particularly girly this is great, the scent makes me feel instantly happy and brightens up my shower. It leaves my skin feeling soft and clean (not an intensive clean though) and the smell does linger throughout the day but doesn't remain too sweet so you remain rather fresh. It's a nice treat every now and again (or whenever the Christmas range is around) but not a go-to shower gel for me.

I am another big fan of this shower gel. First off, I love the smell. I know some people find it way too strong and overpowering, but I personally like stronger scents. This to me smells sugary sweet - basically, it smells just as girly and pink as it looks. When I use it in the shower (on a loofah) the scent fills up the shower, and I don't find it overwhelming, but very pleasant. My shower and bathroom smell just like this after I use it, and of course, they don't smell as strong as it does when you smell the product straight from the bottle, so give it a chance! If you know Lush's bubblegum lip scrub, this is pretty much the exact same scent. They've also released a wand with a solid star that you swirl in your bath to make bubbles and a sparkly massage bar in the same scent for Christmas, and I am super excited to try them both out! When used on a loofah, this gel foams up really well and provides a thick, rich lather. The lather leaves the fragrance on your skin, but it isn't overly strong, and I find that it doesn't interfere if I use a scented lotion or a perfume afterwards. It isn't Lush's most intensive cleansing product, so it won't necessarily leave you feeling squeaky clean but I feel refreshed after using it, and it does do a good job of cleaning my skin. There is also some blue-ish shimmer in the gel, which I find settles at the bottom of the bottle even if yous hake it on your skin. Because it is a shimmer and not plastic glitter particles, and its tendency to linger at the bottom of the bottle it doesn't stay on my skin at all, which I'm sure most people would be happy about. If you do want a bit of sparkle, try the Snow Fairly sparkle massage bar! I don't find it particular moisturising, which isn't surprising given that it's a shower gel, not a cream, but I don't find it drying either. My skin feels fresh and clean after use, and not particularly dry or soft - just moisturise afterwards and you should be fine. I don't know how it performs as a shampoo, as I haven't used it on my hair. As this product only comes out at Christmas time, I buy the biggest size (500g.) My younger sister and I both use this, and it has lasted us just about all year. We didn't use it every day because we wanted it to last, but we probably used it roughly 3 times a week, sometimes a bit more or less. Around October sometime, we started running fairly low so we've been using it less than usual, but now, (November 12th) we still have a bit left, probably enough for about three more showers each. When used with a loofah a little goes a long way as it foams up so well, so we only needed to use a little bit at time, which also explains why it's lasted us so well. One thing that I have noticed is that recently it's started separating in the bottle little bit. It hasn't done it very much at all, however this probably suggests you shouldn't keep it for any longer than 12 months (I bought the bottle late December 2012 and started noticing the separation justnow, in November, so it hasn't quite been a year yet. However it is still working just as well as when we first bought it. Unless you have an aversion to the strength and sweetness of this gel, or have particularly dry skin and would prefer to use something more conditioning, I can highly recommend this product. It is one of my favourites, and I'm very excited to head into Lush as soon as I get the chance to buy another big bottle to last me another year.

I like this scent very much, as does my 18 yr old daughter. No, she loves it! My hubby even liked it and uses it sometimes. I don't notice any glitter. It cleans our hair well also and the scent lingers there very well. It's a nice light scent.

Can't believe I just tried this shower gel for the first time! LOVE! Took me a couple hours to nail down that first-whiff scent...not bubblegum, not candy-in-general, but RED SWEDISH FISH!!! Bought the smallest bottle of Snow Fairy to try, and am going right back to LUSH for the largest bottle (which I hope lasts me until this time next year, along with my annual order of BBW's Twisted Peppermint and Winter Candy Apple).

My skin is very sensitive to shower gels and this did not work for me. Usually my chest will itch after shower if the shower gel did not agree. This did not work. Korres, Weleda shower gel are fine though. Lush's may contain too much additives like fragrance, glitter etc.and Lush is suppose to be natural...i guess i should have known since everything from Lush contains tons of fragrance which is a proven irritant. I can smell a lush store from far away! and its impossible to determine the smell of one product because the whole store is a mixture of strong fragrances, i just don't know what i'm smelling. It also smells like candy which is alittle weird for me.