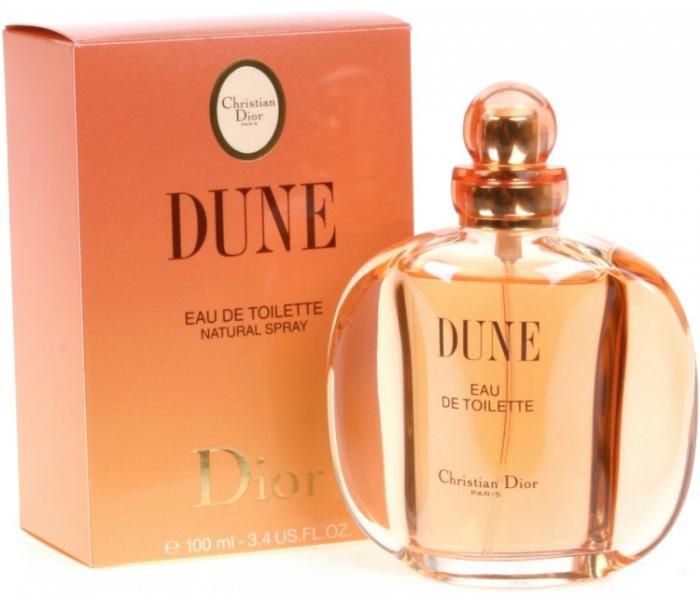 Review of the older formulation, the new one IS NOT worth seeking out, very watered down and different. Dune is art. That is how I would describe this perfume. It is a marvel. You either love it or hate it, and I love it. When I say it is art, it is because this is so complex, and so different. It smells a bit like an offshoot of Cartier's Must, but it has it's own personality. This is a wonder in warmer weather, and just as beautiful in colder weather. This is a complex perfume with many layers, and it's easy to see why it has such a following. It is a warm amber in the base surrounded with sandalwood, musk, vanilla, and patchouli. The floral notes include jasmine, rose, ylang ylang, lily, and more. The bottle? Also stunning and unique. Older formulations are crazy expensive, but so good. If you are lucky to try this in its original formula you are very lucky!

The original Dune prior to reformulation is in high demand, so it's harder to find it anywhere, or you'll find a half full bottle (and that hardly seems worth it). There something to be said about Dune's ability to stay on the market after 26 years and thousands of perfumes that have come and gone since then. This is truly unique and not at all what you'd consider a beach scent with coconuts and something that smells like sunblock. Dune takes on a deep suntan oil scent, hot sand, bodies in the sun, dune grass, sea wind, and drift wood. In 1991 most perfumes were still made in the style of the 80's, but believe it or not Dune went in a whole other direction. I suppose for 2017 it might be too heavy for most people, but it really shines as a signature scent for the women that choose to wear it. Even though MUA has it listed as an edp and an edit, it was never made as an edp. The edt was just made to last all day. There was a parfum version that was long ago discontinued.

I'm rating the older formulation of this, which is rich and deep with amber. It makes you think of the sea side, a hot day at the beach. This to me is an abstract perfume with many layers. You have to wear it to appreciate it. It's not one you will love on paper. This is good for warm weather, it's also beautiful in cooler weather. Other notes include mandarin, peony, and vanilla. A beauty! Sadly, as with all Dior's current offerings, it has been reformulated and the fragrance is not the deep beauty it once was. Try and find vintage if you can! This is similar to Cartier Must in a way, also Allure by Chanel.

I discovered this scent via a super cheap drugstore imitation circa 1993. Even with the poor quality imitation, I knew this was something unique. It spoke volumes to my soul. I understood for the first time how a perfume could provide the tranquility that religion is powerless to bestow . Dune discerns one's inner demons, hauntings, joys and satisfactions. The scent evokes thwarted longings, spiritual ambitions, and our universal hope for a meaningful existence. Here was the pleasure evoked by a perfect fall day and the bittersweet memory of the early winter. As a quite ordinary human, I certainly never dreamed of being able to afford this magical elixir. Fast forward. Yes I was mysteriously able to afford it. There is simply nothing like this scent. I cannot bring myself to wear it every day, that would just be wrong.

Dune is a truly magnificent perfume on the right person - I am not that person. I have been trying Dune every five years or so, ever since it came out, always hoping that as my body chemistry changed, that it would become magnificent on me. We're simply not meant to be. On me Dune smells like beautifully preserved old clothes that have been locked away in an attic for years with a pomander tucked in the chest to protect against insects. It is musty, dull, dry and faded. When I wear Dune I feel so old. The mustiness of it on my skin is unlike any other fragrance I've tried, and I've tried hundreds in my lifetime. On the right person Dune is warm, sensuous and sexy without hitting you over the head. I'm friends with someone for whom Dune is the right person. I hate her.

Soft, woody, oriental, yet fresh. A precursor to serge Lutens orientals, vintage Dune forshadows gourmand, yet is not cloying. I almost want to say it opens with the crispness of SL Gris Clair and dries down to something like Chergui. To call Vintage dune edt an oriental is almost to do it a disservice. It's is nothing like a modern gourmand sweet, powdery, cloying oriental. Nor is it like a traditional oriental, in the style of a big house, like Guerlain. Yet, it's definitely a western fragrance, which to my mind signals Western Sensibility or French. I cannot quite explain why I think it's modern (in a classic post modern sense which is clearly not the same as modern, today). It's Dry, but not camphorous or acrid the way some modern niche can be. Nor is it fusty or musty or old. its almost seamless in its composition - no overdose of a fashionable ingredient like oud or incense here. It has the back bone that I wish some of the serge lutens fragrances could have. It has weight, heft, density without being suffocating. It's not frilly or cute or pretty but to me it's unabashedly sexy in a very streamlined way. I believe it was composed by Sieuzac, and I have recently worn a bit of vintage Bel Ami and Fahrenheit which are also Sieuzac creations. They are obviously composed of different accords, but they cohere in the same way. Agree with Shazzer1976's comment that Dune references desert, not beach. Sorceressofthedark lists it's notes, but it's one of those compositions that transcend notes. In fact to read the notes, I almost feel like wow, I cannot quite get a handle on the scent of these disparate parts. Some reviewers mention calzone. I don't get a lot of calone here, but I have not worn anything with a marine note in many years, so my nose is out of practice I with those types of fragrance notes. Recently I tried Maroc pour Elle.MUA reviewer Zeynepad noted a similarity to Dune and I thought there was a similarity somehow to Zino davidoff. . . So I thought it would be interesting to compare the accords of these different scents. MpE opens with Jasmine. Zino is distinctly masculine. . . . Accord in MpE: Petitgrain (bitter orange), Lavender, Rose, Jasmin, Cedarwood, Sandalwood, Patchouli Accords in Zino Davidoff: Bergamot/citrus, rose, Patchouli, cedar wood, sandalwood, Lavander, vanilla, musk, civet Accords in Dune: mandarin, bergamot, peony, broom, Jasmine, rose, palisander, patchouli, Amber, oak moss, musk, vanilla, benzoin

I had to try Dune because I read this is Kate Middleton's signature scent. I believe what I tested was an EDT. On my body chemistry, this smells anything but young, beautiful, royal! It's a strange &quot;old lady&quot; smell. The bottle, however, is quite lovely. Most of Dior's range smells way better than this! J'adore, Hypnotic Poision, the Miss Dior range, are all so much better than Dune (at least on my skin).

Dune for me is really reflect my oriental side. I'm Indonesian, and I really familiar with this kind of scent. Dune exactly smell like traditional scrub called Lulur and it's so delicate, dark, delicious and really oriental. I got compliment from Mum, boyfriend and friend and they said this is the right scent for me..gives the masculine edge, Not that sickening sweet candy-ish fake vanilla. Thank's Dior, I bought the rejected one (non box) for only $20.

The new Dune is a bright, sparkling scent with the mosses crisp and clear, lying low to the skin. But where's the punch of the old Dune? It's supposed to take me away, at least it used to. But the new Dune takes me nowhere, and I waited and waited. The opening is a ghost of what it should be, what it used to be. It lasts for barely an hour and quietly slips away. Shame, shame and more shame. I realize that many cannot purchase the old formula but if you can, look for it instead of the newest formulation. It will be money well spent. Unless I want to continue spraying, it's vintage Dune for my selection. Top Notes: Aldehydes, Peony, Mandarin Orange, Bergamot, Brazilian Rosewood. Middle Notes: Lily, Jasmine, Ylang-Ylang, Rose, Wallflower. Base Notes: Sandalwood, Amber, Patchouli, Musk, Benzoin, Vanilla, Oakmoss.

I am not going to repeat all the accolades you can read below but I could not resist adding a review on one of my favourites. Dune is a one of a kind fragrance based on slightly bitter dark green and herbal accords. It is a fiercely independent and intelligent scent - no crowd pleasing here. Update on January 16th, 2016: I like smelling Dune on the skin next to Shalimar: its subtle bitterness seems to complement the sweetness of Shalimar in a surprising way.