Rain Pick Me Up Spray 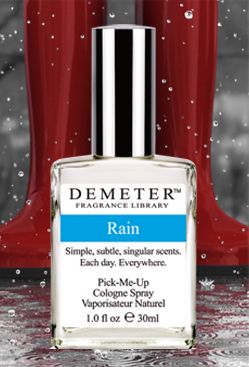 Truly, this is amazing, but not for the reasons you would expect. If you are expecting to smell straight up rain, like during or after the rains, you are likely to be disappointed with this. This perfume is more meant to mimic the smell of the air moments before the deluge starts. Right before it rains, the barometric pressure changes, causes forest plants to release certain oils. These oils are released into the air and leave a sweet, very distinct scent. When I first put this scent on I was like &quot;WHAT? Seriously Demeter? I expected more of you.&quot; Then i walked outside to put the recycling in the bin and got a whiff of the outside air (it was due to rain). IT SMELLED EXACTLY LIKE THIS!!! I walked back into the house and the rain started. If you have the chance to compare this scent to a wooded/ field area just before the rains, please do. You will be absolutely astonished at the abilities of Demeter.

would NEVER buy this again in a million years. made me gag. so disappointed. to be fair im not sure what i was expecting but i sure wasnt expecting to feel sick from it.

I ordered this perfume on a whim. When I first got it, I was extremely disappointed. I expected wet grass and other earthy tones, combined with wet asphalt and mud- the scents I generally associate with rain. What I got first came off as chemically and manly, but after spraying it around my room I began to smell a little more behind it. The reason a lot of people don't like it is because it doesn't smell like rain, but I think it just doesn't smell like rain the way rain generally smells. This is a special kind of rain. It's a rain that's incredibly hard to describe, but I'll give it a shot. You're sitting in an unfamiliar grassy field with familiar people, surrounded by mountains and citrus trees. It's the dead middle of summer and everything is quiet and calm. The air is thick and heavy- not in a way that it's hard to breathe, but it just feels like it's pushing down on you. There's a subtle excitement floating around, and you can tell something is coming. The grass is just wet enough to slightly moisten your jeans when you sit down. You're wearing someone else's large comfy sweatshirt, freshly washed so it smells faintly of mountain air and linen. Just over the mountains, fluffy grey clouds are beginning to float towards you. Later that night, back in the cabin you're staying in with family, you take a long bubble bath (bringing in a soft, soapy aroma) and pull on soft, clean flannel PJs, then crawl in your bed under a heavy, handmade quilt. Not long afterwards, a soft pitter-patter of rain hitting the roof and window begins, and you drift into sleep.

i have been using rain all thoughout the fall and spring, it a nice smell, not really like the smell of (durning or after) rain. still its clean, alittle man-ish but that fades. actually the smell fades very fast! i learned to spray it on my clothing to help it last longer. i like it but i wouldnt buy it again.

This is a pleasant, aquatic scent but not quite the scent of rain to me. It's missing something. Still, I'd buy it again. Found it at Marshall's, so it was cheap.

I guess I am in the minority here, but I really like this Demeter scent! I am attracted to fresh, clean &quot;rain&quot; type scents, so this is perfect for when I am in that kind of mood. It's very earthy, with a touch of sweetness, like cantaloupe, as someone else described. It might not work for everyone, but it certainly works for me!

I don't have this one, but I think I got enough sniffs of it in Ulta to do a review. I really wanted to like this one so I kept going back to it in the store and spraying it on to sniff again and see if I smelled it right the first time (people must have thought I was nuts lol). I too love the smell of rain, but this doesn't smell anything like rain. It smells like candy and soap, particularly a candy I used to eat as a kid that tasted like soap, can't remember what candy it was, but it might of been blue PEZ (I'll have too buy a pack to see), but anyway thats not the point, the point is it doesn't smell like rain. I think I'll stick with Firefly which makes a better rain scent.

my sister and I were browsing Sephora and I've always loved the smell of rain (not the fragrance but in nature) and coincidently I ran across this number. so I sprayed it on my sister (we have the same body chemistry and I was already wearing perfume) and it in no way smelled like rain. It smelled exactly like cantaloupe! which neither of us enjoyed.

I was hoping for a crisp, clean scent with this one, but I find it to be very musky. It smells very earthy, which isn't bad but not what I was looking for. Others have compared to the wet, autumn leaves. That's very accurate I think. If you want an earthy scent, give this one a shot. My husband likes it very much, and he doesn't normally like fragrances.

Demeter fragrances has just come to Sweden. I bought Rain and I just love it! When it dries down, the smell is just so fresh, cool and light. I am a sucker for light scents, the only one I can stand. This one makes me think of a really hot summerday. When the concrete on the ground is hot and then suddenly a cool shower from above surprises me. I can actually almost feel the cool water on my face. I already I am eyeing Salt Air and Laundromat.