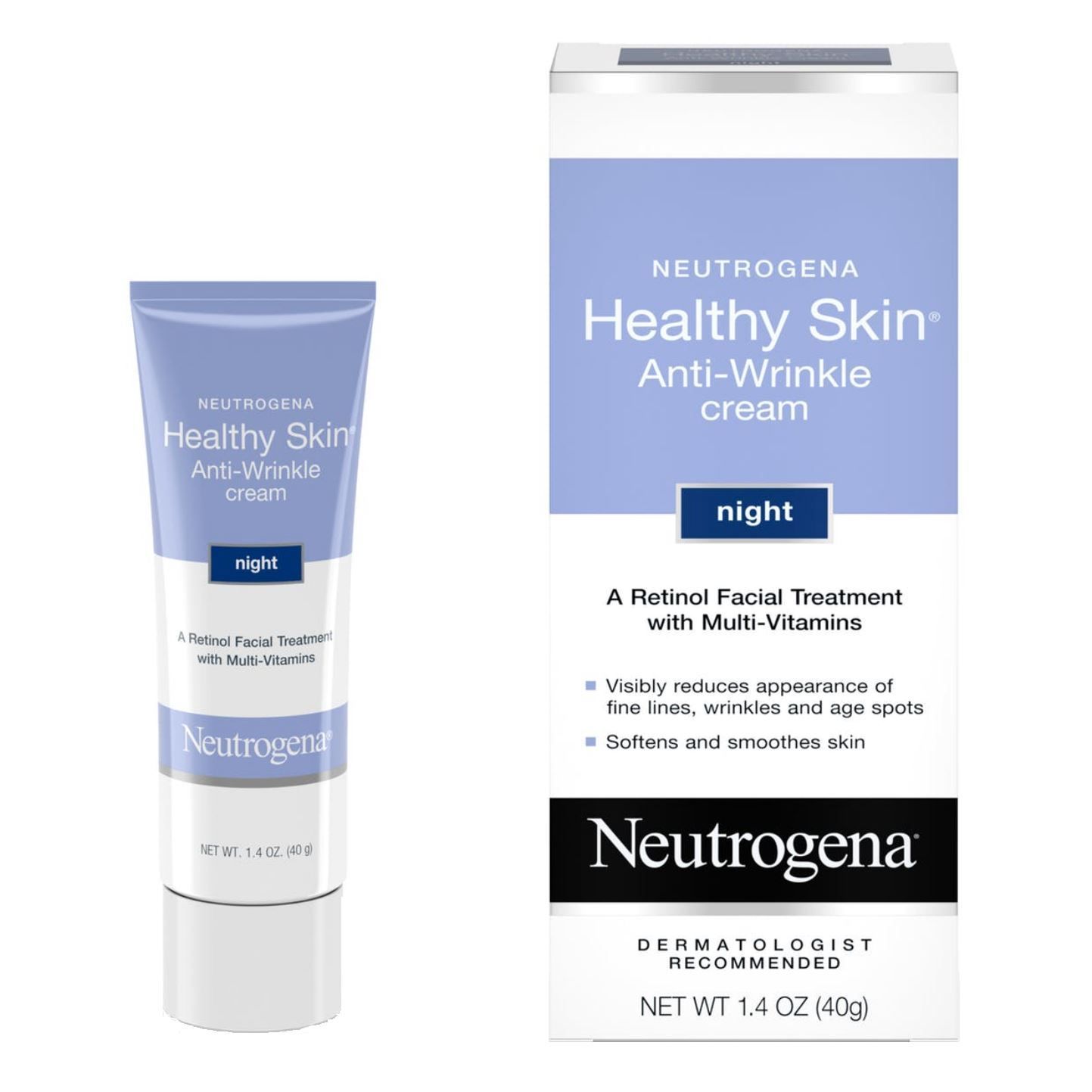 I used to use this many years ago, but the ingredients were different then. (I don't know why I stopped; I think because I like to try new stuff now & then, but never found anything comparable to it) For one thing, it had way more retinol, as it was listed 4th or 5th in the list. AND after using it for a few months, I did see my lines and wrinkles become less noticeable! My skin tingled a bit when I used it, and at first I used it every other night because it was so strong. Now the product has been watered down a lot, with retinol listed LAST. I know when that happens, it means the amount of the ingredient is miniscule and not enough to be effective. And I've found this to be true. It's still a decent moisturizer, with other beneficial ingredients, but what made it special isn't the case now. I thought the price was reasonable for the amount of retinol it had in the past. I haven't found anything comparable to the OLD formula, whether in their Ageless Intensives line or another brand like RoC. (I think that's the name) No drug store brand has enough retinol in any of their moisturizers, but they can legally say "retinol" on the packaging no matter how tiny the amount is. Neutrogena has other lines, but all of the products I looked at had retinol listed last. I like the tube packaging as opposed to a jar or pump. But after I use it up, I'll be searching yet again for a good night cream with enough retinol to do something!

I gave it two lipsticks for not making my skin break-out (many things do) but not seeing a reduction in my wrinkles.

This might be the best retinol product I've tried, including prescription Retin-A. It's taken 3 weeks for my sensitive, acne prone skin to adapt, but I've turned the corner now and my skin has really improved. I am breaking out less, the tiny bumps are fading as are my old scars and age spots. This is definitely worth the money and I will repurchase.

Oh my god! It burned my skin really bad. I stopped using this and it was gone after a week! DONT USE THIS IF YOU'RE SENSITIVE WITH RETINOL.

I have used Retin-A so Retinol is not a problem for me. Is it me or is Neutrogena getting sloppy with their products? This (and a few other Neutrogena products) have seriously taken a toll on my skin! I work very hard to keep my skin clear of acne and wrinkles, so to have such an amazing brand name go to hell in a hand basket is very disappointing. Several years ago, I would ONLY use Neutrogena products and now I run from them. This stuff broke me out, made me look like a grease ball and gave me a rash aside from the pimples. So frustrating! I've gone the whole foods route now and try to find more natural products. Bye bye Neutrogena....It's been nice knowing you (until now) :(

I haven't read any review about anybody having the problems I had with this product... so I thought I'd post my experience. The first night I used this, I woke up with tiny (barely noticeable to the eye) dry bumps around the side of my nose and chin. I probably should've stopped using it there, right? Nope, I'm overly optimistic. I used it again the next night, and I woke up with the same tiny bumps all over my face this time. I stopped using it for 2 nights and then decided to try again (as the packaging does say you may have some irritation, and I thought perhaps that was what was happening). My face is now lightly burning and extremely dry. Needless to say, I am now done with this product.

I have been using this product off and on since 2008, when I originally bought the tube for my husband. Fast-forward to 4 years later and I am surprised I have kept it this long, so I decided to use the remaining 75% of the tube, since my husband is not much a skincare kind of guy. I have been using this product almost every night for a year and find that it is non-greasy for my combo skin type (great because I hate waking up to my husband in the morning with the oiliest face - NOT attractive), I find it "calming" and reduces redness on my acne-prone face. For its anti-wrinkle properties, I do wake up with a tighter, firmer face and because I am only 25 and Asian, I cannot attest to this being a miracle product. PROs: + Non-greasy + Firms & tightens my skin overnight + Doesn't break out my acne-prone skin + Calms & reduces my redness + On Paula's Choice/Cosmetic Cop's TOP "Best Retinol Products" list + Affordable for an anti-wrinkle skincare product ($15-20) CONs: + Must be careful with extracting cream because it is easy to push out too much cream due to the traditional tube design

As the product boasts 'retinol' the star ingredient is high on the list for this product. A lot of reviewers complain of getting irritation while using this. This is a normal symptom while using a retinol product. The good news is that it has anti irritants like green tea wich might help. If you still experience irritation stop using it or use it only every other night. Although I personally think it depends on any experience a user had if they used a retinol product before. On a personal note I used tretinoin and my face itched and stung my skin peeled more than a bananna and turned red . When I used this though it did not bother me at all. Don't quote me on this though because this was just my experience and I can't speak for everybody. This is a product that you must wear sunscreen with and the product warns you about this on the back. If you don't adhere this warning the positives of using this will cancel out you will have more irritation and you will waste money. Anyway I don't think this has really helped my acne my brother uses it too and it doesn't help him. I don't think the concentration is enough to help that. I think this has helped fade my acne scars a little but only temporarily. This comes in a lotion and it feels lightweight. I would like it to be a little heavier but that might just be me. This also has small amounts of vitamin E wich work as antioxidants wich is defenitely a good thing. I brought this at the drugstore and the packaging protects the ingredients inside of it. It cost $13.00 and for 1.4 oz that is an okay price.

I have super mixed feelings about this product, so I'll let you decide after my review! I bought this because my face was a little dry and I thought it could do with a bit of love in the form of a night cream. I put it on, and my first impression was that the cream felt really nice to put on but then kicked in the retinol. I've never used retinol before in my life so I guess my skin reacted to it like a newbie. My skin broke out into the most hideous dry, painful and very very red rash all over my face. And just as luck would have it, I was going on holiday that day. None of my usual creams worked to help it (cliniques moisture surge) and everything hurt. But while I was on the plane, I smothered on some of Elizabeth Ardens 8 hour cream and although its quite thick, it soothed it somewhat. Now by this point, you're probably all scared of this product. But when I landed at my destination and was at the hotel, I pressed a warm damp cloth to my face and found that all that disgusting dry flaky skin was quite literally peeling off with minimal effort. After a very engle exfoliation with the cloth and some cetaphil cleanser, my skin was a bit pink but the gross skin was gone and my face actually felt much softer! For the next few nights I continued to use the 8 hour cream till my face was back to normal . Now, the moral of the story is that if you're willing to brave the storm of this cream then go ahead. If your skin is particularly sensitive like mine, I recommend you use this product when you don't have any parties of social events to go to (just in case you get a reaction). Personally, I only use this product about once every 1-2 weeks because it scares me a little so I probably wouldn't repurchase.

I am 53 years old and have used this product for years. I am told I look like my daughter`s sister, not old enough to be a grandmother, etc. I have used Neutrogena products for years. I have tried other products, only to break out, get flaky skin or other problems. This is the only retinol that works without irritation and peeling. I have no lines around my eyes. I also use sunscreen, avoid the sun, wear sunglasses, and have taken care of myself. This is just the way it has to be. I know that the endless tubes of this product are what have helped the most along with a light moisturizer at night. Don`t use retinol in the day, it makes your skin more sensitive to sunlight. Also use the one that says Night it is the original formula. Recently I have been sick and had to try some other Neutrogena products and I am equally pleased with them.