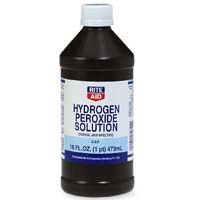 use this to whiten my teeth it works!

Wouldn't use this on my face (unless I got a really bad cut or something), but this stuff is fabulous for whitening my teeth. It's gentle enough that I can use it nightly, and doesn't cause tooth sensitivity the way that Crest White Strips did. The effects also last much longer, since, again, I can use it every day instead of just twice a year. Should I also mention that it's ridiculously cheap? Why yes, I should. It's like $2 a bottle. Superior in every way to White Strips - price, effectiveness, and comfort. I've had slightly yellowish teeth since I was a kid - thin enamel or something. Now that I'm an adult and drink coffee daily, this combined with a whitening toothpaste keeps them looking much better. I don't want to go movie start white, because I hate the fake look, but the whitening I've gotten from this is perfect and natural-looking, a bright ivory instead of a blue-white fluorescent gleam. Just the way teeth should be.

I love this stuff because it gets the really bad infections out. I use it for small cuts and wounds that are super infected and won't go away with neosporin/bandaid/leaving it alone. I'll put it on usually just one time and the next day the infection's almost gone and by then it's like, OK, I got this! And usually heals up on it's own. Sometimes I'll do this twice but it's great. I know that this kills good and bad cells so I try not to use it too much, but otherwise, awesome. I also have dermatillomania and when I'm stressed I go overboard and this helps me.

I use baking soda to brush my teeth followed by this as a gargle and rinse and have great results. Now I see many other uses here that I will soon try out!

Peroxide very useful for drying out cold sores. That's what I use it for.

I found this gave me nice results as a toner, apart from the lighter eyebrows and highlights around my forehead. My preferred use for this, however, is as a mouth rinse. It is fabulous for maintaining white teeth and freshening breath. I prefer it to mouthwash as this doesn't burn my mouth (I use 3%, undiluted) and I see noticable results if used regularly. It's also dirt cheap, and I usually buy in bulk (ie. 2 litres) as I go through this very quickly (roughly two mouthfuls per day), thus saving even more.

Oh my god ! This is the best product that i use ( but , only when i have a breakout, only !! Because its not good at all for your skin ) i use it with a Q-Tips and apply it only on white pimples. really love it.

As a spot treatment this works wonders. Be careful though because it can lighten skin on the spots you use it on (at least IME). I tried to use this (diluted) as a mouthwash as well but ended up getting some lovely canker sores on my tongue from it (if this happens to anyone else, I read somewhere to swish with liquid Benadryl and spit it out 4-6 times/day. It's supposed to help with the pain and irritation I guess.). At any rate I won't be using this in my mouth again anytime soon. Packaging is good (a bottle but I have seen spray-on types as well), it's cheap and you get a lot.

I don't use this on my face, but as recommended by my dentist, I use it 2x daily before brushing. Not only does it kill germs &amp; bad breath, but I regularly get compliments on my nice white teeth (and I drink 2-3 coffee or espresso drinks a day!).

Hi Everyone, Just wanted to give you an educated review as I have been using hydrogen peroxide on my face since my early twenties as a toner, and now I am 34. I asked my dermatologist as I had heard there were links to cancer, as it DOES kill skin cells and I was concerned. I noticed white spots on my forehead where my skin had lost color, but thought it was perhaps to the benzoyl peroxide I had been using in my acne cream as a result of years of use. My dermatologist said to STOP using it on my face. However, he did clarify there are NO links to cancer. HOWEVER, it DOES kill bad AND GOOD skin cells, and we don't want that on your face as he explained cell turnover is what you need to keep wrinkle free - AND your skin properly pigmented!! I have been off peroxide for about a week, and am thrilled to say most of the white spots are GONE. More importantly, I have not broken out. My I suggest to all you users that have suffered from acne to use Pears soap, a good alpha hydroxy lotion, and a great moisturizer. If you have a good and fairly simple routine, I promise you will NOT need peroxide. I just wish I had know this earlier, as I don't even want to THINK about how many skin cells I have killed! But for you long time users such as I, NO links to cancer, but not a good idea to use on your face due to the reasons stated above that were explained to me. I hope this helps! PS if you HAVE to use peroxide, DON'T use it as a toner, pour some on a Q-tip and apply to spots ONLY! :)