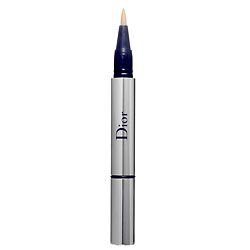 Great product but I see lots of people reviewing this as a concealer... BUT PLEASE USE IT AS AN ILLUMIZER IT IS NOT A CONCEALER.

Tired eyes and refused to give up on make-up? read on… My daughter and I went nuts recently at the Shopper’s Beauty Boutique using super redemption points that we saved all year for. So I’m hoping this will be the first of a couple reviews from my free/splurge items I grabbed. Dior Flash Luminizer Backstage Pros Booster Pen, colour: 002-Ivory I got this and OMG! Here are my current issues and why this falls into the ‘OMG’ category… My eyes have been driving me crazy for about 4 weeks now with seasonal fall allergies and the skin under my right eye specifically is so dry. (I feel like I look 10 years older and aged almost overnight!) It’s beyond moisturizing. I literally have to wait for it to pass and clear up. Combined with ‘fine lines’ my usual go-tos for under my eyes were just a creasing mess! Chanel &amp; Estée Lauder concealer which use to cut it, made it so much worse and I had to wipe it off. So I set out looking for the best under-eye concealer for, ah-hem, mature skin. Gasp! But when it’s time, it’s time. Deal with it, right? And of course, I can’t do no make-up. It’s a thin consistency, but it covers, but just the right amount of coverage for ‘mature skin’. A click pen type of applicator. So you have to initially click the top several times until the product starts to come out. As I have had a similar type of applicator for Kat Von D liquid eyeliner, I know enough to not click like a crazy person, otherwise you could be faced with a giant glob of product in one shot. Comes in I think only 8 colours, but if this type of product is of interest to you, try to make one of them work. When I applied it, even over my dry right under-eye, I was not only surprise that it didn’t make my eye look worse, but actually looked better than acceptable. (LOL, yes I literally was only looking for better than acceptable, the bar was low.) And that’s with my current right under eye allergy condition. On the left eye not under allergy attack, it looks great! Back in the day, I could pull off thicker concealer but now it’s time to make a change and I’m so grateful to have found this. I can only hope they don’t discontinue it! I apply it first and just lightly use liquid foundation on top with setting powder to blend it all in. You only need a tiny bit so I’m hoping this will last for quite a few months.

For the last 2 years I`ve re-purchased L Oreal`s copy-cat concealer Visible Lift Serum Age-Reversing Concealer and was generally satisfied. That product costs approx. 15.00 Canadian but the Dior, costs $48.00. Huge price difference, is it worth it? Yes, if you are going to splurge on a luxury product anyway. The Dior doesn`t cake up in fine lines around the eyes and has a lovely glow to the finish. It really does look more natural even if you go heavy with the application. I like to buy Dior if I know I`m also going to get something extra, like points on my points card or a freebie. Unfortunately, no freebies this time. Dior seems to have a new policy where if you buy 3 products you can get some goodies. This is new and was not always so. Better if they gave you something to try so that you can go out and get acquainted with their products and then splurge some more, no?

Tried this in shades 001 and 002. It smells like their big mascara, like roses, which l like. 001 is pink-toned, 002 is yellow toned. Both work on my NC20 skin. They are great for getting rid of fine lines at the corner of the eyes, brightening around the eyes and good at eliminating greeny veins. 001 l found more highlighting than 002. This is to do with undertones, although as a concealer 002's base is more natural. The only annoying thing is that l have crazily dark circles that they couldn't cover. I applied them last, after powder, and they pulled off my heavy duty MAC studio finish. Not great for layering. I had to go back in with my MAC. I prefer this to Touche Eclat as it's slightly better at concealing.

Great finish. Doesn't crease, natural finish. I use it with Dior's bb cream. Doesn't create lines. The packaging is very luxurious, and application is easy. Love it!

it's nice, but a bit too light for me, it barely highlights anything! prefer the YSL touche éclat

The product itself is flawless!When i first bought it i was looking for a highlighter to boost my natural glow and this is exactly what it did.However,it lasted ONE MONTH.I haven't even used it every day.If you have the funds to splurge,the pen is great but else it's not worth the money.

For those who think their pen ran out early -- it probably just needs to be shaken and the knob twisted a few more times. The mechanism isn't well-made. If you don't get the twisting and shaking just right, either nothing comes out or you get a blob of stuff. So annoying!! Yet, the product is very good for dark areas, and as a subtle highlighter. I love it best as a liner for my upper lip, -- after foundation and before lipstick/gloss -- to give some sparkle and make my lips look fuller. The color for #2 is just right for my fair skin, and is irridescent and translucent without being too shiny. The pen itself is so annoying to get product out of, however, that I already bought a Laura Mercier highlighting pen when I thought this one was running out and will try that next instead. Edit: Had to add an additional lippie because the color and transparency worked so well! (For me, the Laura Mercier didn't work (too flat and pink) but my daughter &quot;borrowed&quot; that one permanently:)) It's not on my rebuy list for now -- looking for a similar product in a more healthy/organic formulation.

Ok, the verdict is in, this is the best highlighting product I have found. I have tried YSL touche, Maybelline dream lumi (that one is in second place!), MAC prep + prime highlighter, Rimmel match perfection, and L'oreal magic lumi. I use these products to highlight the inner corner/brow bone and sometimes for dark circles. Every single one caused millia under my eyes, I mean every one of them - except the Dior. Very pricey but worth it IMO, it's great for a youthful glow. I also found after using it for a few months my undereye area looked brighter/clearer in general. Very nice product, highly recommend. If you are on a budget, check out Maybelline dream lumi which is also great.

Of the concealer/highlighter hybrids out there this one falls into more of the highlighter variety. Less coverage than YSL Touch Eclat and Chanel Stylo Eclat Lumiere, which are two of the highlighter pens that I've used previously. This feels like a product to add to an existing concealer, something I don't want to do. I like a does it all type. I love concealers with some shimmer in it for the light reflective, wide awake aspect and this has a subtle amount, less than Armani's High Precision concealer. It added a nice glow that's wasn't incredibly obvious. This color was a good match for my pale skin (Laura Mercier TM in Porcelain, Armani LSF in No.2, MUFE Duo Mat Powder Foundation in 200), and even with the slight warm undertone it didn't look strange against my cooler tones. It has a very thin, lightweight consistency, and a smooth, silicone based texture that spreads and blends really well and feels like nothing once its on. One click covered both under eye areas with some left over. But since it's not buildable at all that's kind of pointless given that any amount I use, be it tiny or layered, results in the same sheer coverage. That sheerness and the shimmer drew attention to my circles instead of concealing them. It wore all day without creasing or settling oddly, though it did noticeably start to disappear after about four hours so that I felt like my dark circles were showing through. The packaging is fine, along the same lines as every other pen highlighter out there. I did have to turn the dial and click it about sixty times to get the product out initially, and after that it dispensed normally. I don't actually apply it straight to my skin because of keeping the brush hygienic so I just dab a separate clean concealer brush to the attached dispenser brush and apply it that way. I was only able to use this about four times before I experienced a terrible reaction under both eyes and my eye lids. My eyes became swollen, red, and I had hives that burned terribly. That's never happened to me with any concealer before so I must be extremely sensitive to an ingredient in here. I use Dior cosmetics regularly, powder, blushes, eyeshadows, etc. with nothing but good results so it must be a fluke. It was the only thing different I added to my routine so I'm certain this concealer is to blame. I tried this before I bought and fell in love with Armani's High Precision Retouch and ending up returning the Dior. Even discounting the bad reaction I had with the Dior, this still didn't work well as a concealer, and it wasn't long wearing enough for me to like it as a highlighter. Lots of flaws with this one, but luckily I ended up finding my perfect concealer.