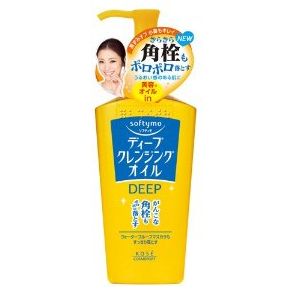 Overall, I would say if you wear heavy makeup and have sensitive skin, this is your stuff. Pros: -Relatively simple ingredients, little to no chance of reaction -I have very sensitive skin and eyes, no problem whatsoever. Removes all eye makeup (I use a lot of longwear) very efficiently, except off course, tubing mascaras, but those are removed once you emulsify with warm water and massage. -The packaging. Practical pump and you can buy refills which cause less plastic waste. Not perfect, but an improvement on the norm. -The slip: The thing that to me makes this better than the cleansing oils I make at home ( I use commercial grade emulsifiers so they do emulsify, but I haven't been able to replicate this texture). Cons: -In Canada I've only found the refill packs sold on Amazon, which I'm working on boycotting. I also don't ebay.

This is my new found fave! Bought it because it was on sale, half price compared to my usual Biore jelly cleanser. And I'm so glad I tried this out, I use 2 full pumps to remove makeup and sunscreen on my neck. Emulsifies well, doesn't irritate my eyes and washed off clean.

Generally works well to remove face makeup, but not so well in completely removing my waterproof mascara. I wear the Heroine make mascara for reference. It still leaves some mascara behind, even after scrubbing. The consistency is thin and watery, but I don't need a lot of product for my whole face - 2 full pumps at most. It washes off easily without leaving a film or residue on top of the skin, which is a plus. It also doesn't sting my eyes either, and is easy to wash out if it gets into my eyes. However, it leaves my skin clogged with little bumps under the skin, and they're quite difficult to extract. Overall, I wouldn't recommend this product for removing heavier makeup and waterproof mascara, and acne prone skin.

My favorite make up remover, it gets the job well done without stinging my eyes or staying oily. I always repurchase this one, it's my favorite.

I so, so wanted to love this, but it broke me out, in small, but consistent pimples that stopped as soon as I stopped using this product. I'm still double cleansing, but with a micellar water instead of an oil cleanser for the moment while my face rebalances. Just a note to oily, acne-prone folks, proceed with caution! It may work for you, but it may not.

Hate to bring the ratings down but this is not a good oil for acne prones. It's a thin oil and I felt like I needed several pumps to cover my face and it didn't completely remove my eye makeup. It doesn't rinse clean either. I'm guessing that's why it caused me to break out even though I washed it off with a traditional cleanser. I was hoping this would be a good alternate to DHC but it's not even close.

PACKAGING: pump bottle, does have a refill pack which is very cheap & convenient to repurchase SCENT: citrus-y at first, as you start to rub it in it does have a distinct smell that most petrolatum-based products have TEXTURE: oily but not too thick PERFORMANCE: works great to remove all makeup (base, eye, waterproof mascara...). Does foam up when in contact with water but not too much, leaves a residue on the skin I've used 1 bottle & 1 refill pack of this and decided that it's time to move on. It leaves a residue on my skin and I never had the same experience using the Innisfree apple juicy cleansing oil, although that one stings my eyes. I could have picked other cleansing oils from Kose that's not as deep and heavy as this one but they don't remove eye makeup too well. Still good & cost effective for those with dry skin to try out.

I should preface this by saying that this is the first cleansing oil I've tried. I've been aware of the increasingly popular two step cleansing routine for a while, but I was really resistant to it because it sounded so fussy - a pre-cleanser cleanser? But then it became clear to me that if I wear makeup every weekday, without a makeup remover my skin wasn't getting cleaned properly, and a lot of the liquid drugstore makeup removers end up being expensive (considering how quickly you go through a bottle) and drying. Anyways, I checked out oil cleanser reviews on MUA before settling on the Kose Softymo Deep as having the best reviews for the price. I use it every evening on the days I've worn makeup, according to the instructions (apply it on dry skin before emulsifying with water and then rinsing), and then follow with a regular cleanser (most often Cerave Hydrating Cleanser). For starters, this really does remove every bit of makeup. It's very satisfying to be able to use the same product all over your face, and although I was concerned at the beginning about using it around my eyes, I've never experienced a bit of stinging or discomfort. I haven't been breaking out while using it, though I'd imagine that's a possibility if someone were to use this as their sole cleanser. I'm surprised that some people report experiencing dryness with this. My skin tends towards dryness, but it has improved, if anything, while using this cleanser. It feels much, much gentler on the skin and eyes than other makeup removers. The value is one of the most appealing things. I've had this for a couple months now, and I anticipate the bottle lasting for 5 months give or take, using it maybe 5 or 6 times a week. Also, most western makeup removers need to be used with a cotton pad, which adds to the expense. With cleansing oil you don't need extra supplies. Bottom line, I wish I began using an oil cleanser sooner. I now consider it an essential step in my routine. While I can't yet compare it to other oil cleansers, Kose Softymo Deep has really fit the bill for me for its effectiveness in removing makeup without drying or irritating my skin, and at a good price.

I’ve tried quite a few cleansing oils (including Shu, Dermalogica, Mac, Fancl, Boscia, SKII, DHC) and Fancl was my favourite for years, closely followed by Boscia. I was looking to save some money & someone on the skincare board recommended this. It’s has a thinner texture than Fancl but it also leaves my skin feeling soft and clean. I think I prefer the thicker texture of Fancl but the price difference is significant and this is a minor issue considering that it removes makeup and sunscreen just as well and rinses clean the same way.

I REALLY wanted to like this b/c of Decadence's review, who also uses retinols like me (tho I use retin-a and Duac) and I too found the DHC CO too drying as well, but surprisingly enough, I found this Kosymo product even MORE drying than DHC deep cleansing oil! Also irritating. Maybe it was the fragrance (I'm starting to notice a pattern w/ me). My skin just felt irritated and more dry when using this. So if you're sensitive to fragrance or something, use this product with caution.