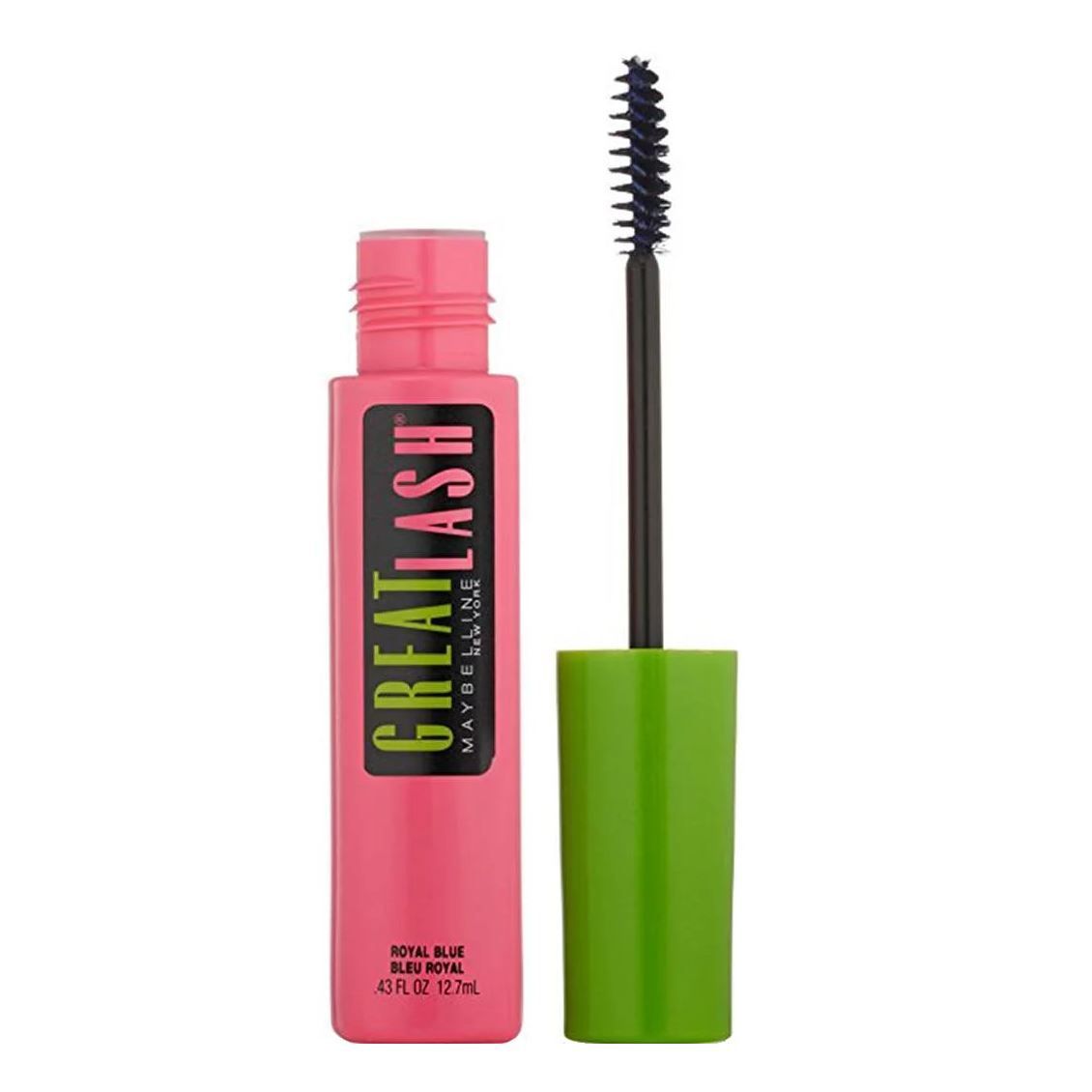 When you put this on and look close in the mirror you can see the blue but it's not as vibrant when looking from a normal distance away....its fun but the mascara it self is weak...so it's more of a topper for me and with the weak payoff I'd rather skip

I didn’t adore the color, at first, before trying it; but I have to admit that this mascara is actually flattering. I’d prefer a slightly more navy/grey color, but I’m happy they carry a natural looking blue mascara, especially in this formula, which I love! I have fine, blonde, feathery lashes—lots of them. I sometimes want a more natural look, and I get it w/ this mascara, ironically, even though royal blue lashes aren’t normally “natural” looking! The color is not electric blue, so it actually doesn’t read “blue” once on, at least on me. It looks more natural than black, too. I was using it only on the bottom lashes, since I prefer the color of my Chanel/YSL (but those wands are too big for bottom lashes), but it’s so easy to apply (formula/brush) that I got lazy and began using it on bottom and top. I’m actually really pleased w the result! Just as Great Lash is a classic formula, this is a really classic color. It would look STUNNING on brown eyes, since it’s almost a warm blue. Green and hazel would look great w/ it, too. I’ve got blue eyes, but this isn’t anything like the 80’s monochrome blue on blue. It’s much more flattering, somehow. Thumbs up! At this price point, you can’t go wrong. Give it a try! Edit/Update: I removed two lippies for slight smudging. If I don’t powder under my eyes and/or stay away from outdoor activity, this may smudge. I wore it on a hike in the mountains and had sunscreen on, which was apparently too much for it to handle, and it ended up giving me blue raccoon eyes. I think I’ll stick with Chanel!

Let me start by as of this date, 2/5/2017 there is a NEW drugstore mascara by L'oreal Voluminous in COBALT BLUE, NOW at Walmart that makes this favorite pale by comparison, ladies!! Where Maybelline dropped the ball and stood us up on a favorite date, L'oreal is to the rescue like a night in shining blue armor. So, this is a posthumous review for the long gone cult favorite. When a new tube, it was awesome. Very blue lashes, pretty buildable, washes off easily, yadda yadda. Dried out way too fast and tended to flake on me. So long. Good riddance. The new stuff by L'oreal gives you screamin' blue lashes, and for those of you that like more volume and length, you can really layer it on more so than this much beloved has-been. You can do a single layer of Cobalt Blue by L'oreal to get what this old Maybelline fave used to do. Weep no more, Royal Blue loving gals, there is finally a pretty darn good dupe out there, in a greater mascara than old Great Lash here. (When you build on layers it is very similar to the bright blue Diorshow high end mascara! ) You're welcome!!!

My favorite blue mascara. I am really disappointed that it has been discontinued after so many years. I use it with white eyelash primer to make the blue really pop. It's an electric blue, which make the whites in my eyes look whiter and make my hazel eyes look a tad lighter. Every time I have worn it, I get compliments. Now I am down to my two last tubes. I wish they would bring it back.

This is beyond awful. My friends and I call it shitlash. It has gotten such a hype because the company has payed for beauty editors to rave about it. Edit: this was for the original black one

I bought this a while ago and just gotten around to using this because I had forgotten all about it. I have tried the original version (black) and i HATED it because it did NOTHING for my lashes. When I saw that they made a colored version, I was intrigued. Upon first impression, it was just like the original.... nothing special, it just made my lashes look wet and a hair darker. Also, i didn't see ANY blue color to it what so ever (on its own). The only way I can get the blue to show up is if i use a regular mascara first, let that dry...and then go over it with this mascara a couple times. I didn't have high expectations for this mascara, but i DID expect the blue to show up! It's a very wet formula and takes a while to dry. Since you need MULTIPLE coats of this stuff to have sufficient color show up... that's just too much effort. I will stick with the NYX and Hard Candy colored mascaras. While they cost a bit more, the quality far surpasses this crappy product. On the plus side though... while the brush is insufficient for coating my upper lashes, I think it's good at separating my lower lashes. I will toss out the tube and wash/clean the wand so i can use it with other mascaras.

I'm holding off on a 5-star rating, because I've only just purchased a tube of Great Lash in Royal Blue and tried it out today. However, upon first impression, I really like it and feel like I should share my thoughts. I started off with low expectations because of a few things: 1) not many Youtubers or makeup bloggers talk about this product 2) Royal Blue seems to be a different blue from the limited edition colored Great Lash mascara (2 years ago I think)--from pics online, that one seems like a bright, electric blue 3) people generally seem to be disappointed in colored mascaras, because it doesn't show up 4) Great Lash was my gateway mascara to the world of makeup, and I didn't even like it back then... That being said, this formula seems improved from the runny Great Lash I tried for what seems a million years ago. Actually, I think the tube I got was quite dry--which was okay by me, because upon seeing the brilliant blue in the bottle, I didn't want to end up depositing too much product on my lashes. The wand is kind of small, but it did the trick for separating my lashes. I have black hair and dark lashes, so at first, it seemed like any old black mascara upon application. But when I turned my head to the side in the natural light, I noticed my lashes were a subtle blue. I wanted some impact/color, but I actually decided I like the subtlety better, because I can wear it daily pretty much anywhere. It's not a neon blue that would jump out at you but be normal only at a rave or Coachella or something haha...it's totally wearable, but gives your makeup a little bit of intrigue in brighter lighting. Although the color looks nice, I don't think it does anything particularly special for my dark brown eyes/ make the whites of my eyes brighter---idk some people may choose color mascara for enhancing purposes. The product itself doesn't volumize, maybe lengthens a teeny bit, but it holds my curl pretty well--which is good. They don't have the Royal Blue at every drugstore, but I got mine at target for $5 and some change. It was either this or the colored NYX mascaras.

As quite a few people have said on Amazon.com,youtube,and other make up review sites,it's a *tiny* scimpy little brush,the smallest I have ever seen and had and your not going to get that much volume with it. The Maybelline describes it as adding length and volume.The blue color doesn't even hardly show up on my medium dark brown lashes even with 2 coats. It's a whole size smaller than a regular size mascara brush.I had to wash an older Loreal Voluminous mascara brush that is a regular size brush (which is a great inexpensive mascara for volume) and put it into the Great Lash tube,but it doesn't fit well enough for the cap to screw on and close up,so now I had to wrap heavy duty foil around it with rubber bands also around it and put it in a plastic storage bag and hope that it doesn't dry up and or go bad!

No matter what mascara I ever try, I always go back to this one. For the price, it is the least &quot;clumpy&quot; of mascaras. I try to spend more money to see if I can find a better one, but I just go back to Great Lash everytime. It's a classic I tell you!