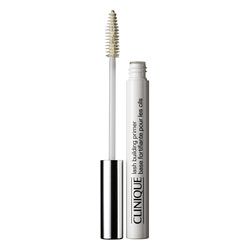 Like the previous reviewer, I find this primer to be far superior to Lancome or Dior. It provides much more length and a bit more volume than both mentioned above. Lancome irritated my eyes, Clinique does not. I like the brush way better than gigantic Dior one. I love the result and how it simplifies the mascara removal process. Will buy again.

I prefer this over Dior, Lancôme and Shiseido. Overall, I think you get less product, but it is less expensive. This works more for adding length than volume to your lashes.

I am new to the lash primer game late to the party as usual (fashionably late heh), but I’ve tried elf, Ulta, chanel, blinc &amp; Clinique; I liked them all except for elf I didn’t think it really helped my lash game. I ended up misplacing them -ALL- ugh when I moved my makeup collex except the Clinique which mine is dual ended w high impact mascara black on one end &amp; white primer on the other end. I’m getting into lash primer &amp; waterproofing top coats because I have very oily skin &amp; my mascara melts. I got this for iirc ~$10 or so off Ebay &amp; I think it gives good results esp w a waterproof mascara. I don’t buy much mascara that isn’t WP because it melts my eyes are Rheumy &amp; watery. This primer is pretty good I have no complaints it makes for mascara stick it for the lashes no complaints I want to try some other brands so prob no go for rebuy for that reason. It’s a good Product but I want to see what else is out there. #winning

I originally got this in the Sephora Lash Stash holiday gift set Christmas '14 and didn't think too much of it (mascara primer in general, actually) since it was dual ended with Clinique High Impact and I'm not too familiar with Clinique products. At the time, I was about a month or so into my desicion to grow out my natural lashes after having lash extensions for almost a decade and my lashes were awful - short, brittle, sparse.. Ick. I was in search of that &quot;perfect&quot; mascara that would save my lashes from despair, and was hoping that there was one in this box. Tried majority of the mascaras without the primer, and honestly wasn't impressed. It wasn't the mascaras that were the problem, it was my sucky lashes. I got bored one &quot;off&quot; day and decided to try this primer with the high impact mascara. It was a total game changer, not even kidding. I did one eye with primer and high impact, and one with just high impact. DRAMATIC difference. I remember thinking &quot;why didn't I try this primer in the beginning?!&quot; Every day, I tried this with several different mascaras, high end and drug store alike, same results. My lashes actually looked NORMAL instead of looking skimpy and pathetic. They were thicker &amp; a bit longer. since the discovery of primers, I hate using mascara without one (and rarely, if ever, do) because it just isn't the same, even though now that my lashes are completely grown out. Since this was my first primer, I didn't really have anything to compare it to. Since then, I have branched out to other primers. This one in particular gets 4 lippies ~ Pros: The price is right as far as high end primers go. The results are noticeable. It does condition lashes nicely and makes them kind of flexible. It doesn't smudge or flake ANY mascara, and I have oily lids. In fact, since I've started using a primer (except for Loreal Superstar, that primer SUCKED and it smudged every mascara I tried it with, I actually did a review on it awhile back) I have no more panda eye! ???? Works well with pretty much any mascara. Cons: I hate to say it, but I agree with the reviewer that mentioned they couldn't find the ingredients anywhere. After doing research and desperately wanting to boost my lashes healthily, I figured any help would do and since I wear mascara every day, might as well use a primer with a growth complex instead having to stick with one particular mascara that contains a growth complex, such as Rimmel. I wanted to know if, over time, this would grow my lashes like Lancome Cils Booster XL claims (which I tried after this and kinda loved. I may have to do a review on it soon) and wanted to do a comparison of the two ingredients. Nope! None available anywhere on the net for this product. Of course, I have repurchased since the original one from the kit, but only because my local Sephora didn't have the Blinc primer I wanted to try, and I was desperate. The 2nd tube wasn't as wowing as the first, but by then I discovered Lancome Cils and fell into lust. And yes, my lashes do seem thicker in growth since using as a base. By then, this one didn't do it for me alone, but when I pair it with LCBXL or Blinc primer, which I have since purchased, holy cow! It definitely still boosts mascara, or maybe it's boosting the other primer, I don't know. Whatever it is, it works! Overall, I would definitely recommend it, especially if you're a high end primer user on a budget. I've compared this to Loreal Superstar mascara/primer and Cover Girl extensions primer/mascara duo. No comparison to either drugstore primer, and this is only a few dollars more. With the price being so low (15 USD) and it making even Wet &amp; Wild mascara capable of looking like false lashes, I think it's an affordable additive to any mascara junky's arsenal. I may repurchase a 3rd time somewhere down the road, but for now I'm on a mission to find that &quot;perfect&quot; primer with long term benefits, because Cils Booster XL and Blinc aren't doing it for me alone (neither one volumize to my liking) and I can't double up forever (; One more thing, a full tube lasts foreverrrrr so it's definitely worth the $15. It also doesn't get all chalky the way Tarte MultiplEye did. It dried beyond use after a week! I couldn't even revive it with eyedrops. It then became wet chalk. NEVER AGAIN. Anyway, the tube I have of Lash Building, I got in January and it is still a creamy formula, not clumpy or chalky. I also find that it works best if I let it sit for about 30 seconds before applying my first coat. I tried letting it dry, but did not like the way mascara was applied over it. Actually find this true with any lash primer I've used, but it may work for someone else to let it dry or apply right away.

I love this. I heat up my eyelash curler, put on the primer then I use Benefit's They're Real mascara. My lashes are both thick and long. The primer also acts a a barrier so if I rub my eyes or my eyes run I don't have raccoon eyes.

This has been the only lash primer that I've been using, because it works so well! I can really see the difference in how my mascara looks when I don't use this primer beforehand! It helps build mascara and does not clump :)

I have straight medium-short lashes....this primer honestly did no justice (I am very easily impress). I barely couldn't tell the difference between with and without this primer, it flaked on me (I used Cliniques Lash Power which I absolutely HATE). The tube is grossly huge and not pretty looking at all. It was also pricey (26$ CDN). Would I buy it again? NEVER.

I use this lash primer before i put on the lash doubling mascara from clinique. and it definately makes it last longer. I even took some naps with it, without any dramatic smudgeing. love it!!

Me: Eyelashes stick straight up, but they are long. Every mascara (including waterproof) has smudged on me so I have taken to mascara primers to help me out. In short, this didn't hold a curl. I curled my eyelashes and as soon as I put the primer on, my eyelashes drooped. Holding a curl and preventing smudging were the only reasons why I wanted a mascara primer. At $15 this is definitely cheaper than Shiseido and Lancome but it does not perform as well. The product comes off white but rather clearish if that makes sense. When I used Lancome, my eyelashes were completely white but with Clinique, the wand and product looks white but doesn't transfer to my eyelashes. I do think this helps with not smudging, (no raccoon eyes) but I can't forgive this product for not holding a curl. Also -- another thing that irritated me was that it was IMPOSSIBLE to find the ingredients online for this product. I wanted to compare the ingredients to this and the Lancome one (which didn't work for me) and I couldn't find it.

I tried Clinique's lash building primer as it's cheaper than Lancome's Cils booster but it doesn't compare in quality and performance. Clinique's lash primer has a wetter formula which I don't like as it takes the curl out of my lashes. (I have very thin, skimpy Asian lashes so they need all the help they can get) Pros: Less expensive than Lancome Good size brush Applies a good amount of product on lashes so this is good to build volume (although it maybe a little clumpy) Cons: Formula is quite wet and takes a bit of extra time to dry before applying mascara Can be clumpy Repurchase: No, I wouldn't and haven't re-purchased this product and I've gone back to my old standby, Lancome Cils Booster.