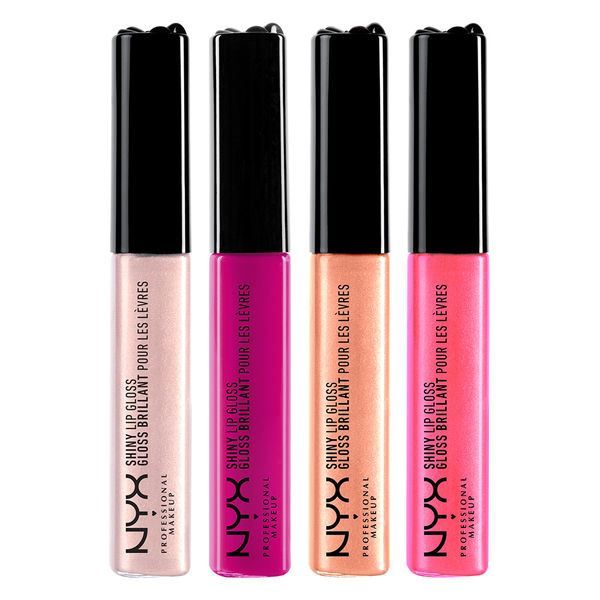 I bought this in shade Sugar pie, which looked as nice dark apricot color with tiny ammount of shimmer. When applied on lips, the color is almost invisible and the shimmer as well. It has a nice cherry scent to it, which can be a little too agressive for someone, but i liked it. It lasts for like an hour on my lips, which is kinda dissapointing.

I have this in the shade Natural and the colour is gorgeous. It stays on a decent amount of time and it's not sticky. There are 2 reasons, however that this loses points with me: 1. the packaging is terrible. I can't take this with me because no matter what I do it leaks everywhere. There's a problem where the gloss gets up near the cap and continually oozes out despite wiping the screw-on part. I have to wipe it down daily to keep it from leaking and that's a waste of product. 2. The smell is really strong and kinda gross. It smells and tastes like cherry cough syrup which is so sweet/sour I mistook it for sour bubblegum scent the first few times I wore it. And it doesn't go away after any amount of time. The revlon gloss in the shade super natural is much better overall, so I recommend that one over the NYX.

Ridiculously creamy and moisturizing. I don't know what color I have as the sticker fell off, but it is a beautiful natural pink with no shimmer, just a beautiful gloss that makes lips look hydrated and healthy. Probably one of the nicest glosses I have used for the first 10 minutes of having it on. After that, it's gone. No staying power on me at all. I keep this in my car for when I am just running into the store or something and my lips are dry or dull. Instead of digging through my purse for lip balm, I'll grab this for hydration and a shot of color. By the time I come out of the store, it's pretty much gone. Not even a faint stain left. It goes on as a 5-star gloss, but leaves as a 3 for how quickly it vanishes. At least it hydrates.

Oldies but goodies. I tried these after falling in like with Nyx Butter Glosses. You get quite a bit of product for the price. Very serviceable packaging with a doe-foot wand. They come in something like 30+ shades--everything from near-transparent to iridescent purple. The formula is tacky, but not in a bad way, lending some not-bad staying power (for a lip gloss). It's quite strongly fragranced (why cosmetic companies keep cramming their face products full of scent is beyond me). Smells like red Twizzlers, but this fades quickly (either that or it paralyzes one's olfactory cells). Nevertheless, at least one tube is always in my handbag. There are a lot of sparkly shades to choose from but I love the cream colors that contain no shimmer--lip gross, all grown up. Miami Babe especially, a mauve-brown nude that looks splendid with a grungy smokey eye (or even an otherwise naked face) and can be applied without a mirror at a stop-light. So versatile.

First off, this is definitely a lip gloss that offers Mega Shine to be noticed from another planet. The intensity of shine is none other. The consistency is great, and glides on smooth. Has good enough staying power. However, what I disliked and started cringing is the aroma from this gloss. It smells like cherry cough drops, and the more I used it, the more my body cringed when I came to apply it. To the point that I was grossed out and couldn't use this product. My lips refused, just refused. That's why I took off 2 hippies, the smell is horrible. If you can withstand such a strong scent then got for it. I couldn't tolerate it after a while. It's too bad, because the shine on this product is amazing! I will stick to the Butter Glosses, those are sheer perfection!

I bought all the colors cvs had ... I didn't like tea rose there was no color to it like a sheer plum mauve hard to notice so I returned it. Nude pink nude peach natural lala and beige are the good ones

For the price, it was soooo worth it! I have the shade Dolly Pink and it looks so good! It glides on so well, isn't sticky and so bright in colour! A more vibrant colour on your lips may need another layer (but it may feel a bit heavy after it). Only $4.90 in Australian dollars! Of course, the lip gloss colour will depend on the tone of your skin, so the colour choice you desire from this lip gloss WILL depend on how many layers you put on and your skin tone. Otherwise, it is worth the purchase if you are hella low on cash but wanna look fab!

I've had this gloss in two shades- natural and perfect red. They're both fantastic formulas- hydrating-ish (not as much as a balm), really glossy, and not sticky. They also smell kind of incredible, sort of fruity in a cherry kind of way (though if you're the kind of person who thinks that's a cough medicine smell you might not like it). I have a really strong gripe with the packaging, though: it's terrible. Not in the sense that I can't apply it evenly, the dow-foot applicator is totally fine and has a nice slant to it- the thing is it's just terribly weak, and sort of leaks. I dropped one of them on a wood floor (not tile or anything) and it just completely broke and I had to throw it away. And when I close the gloss, product always manages to squeeze out around where the cap meets the rest of tube, so that's frustrating. But I'm willing to put up with it for how incredible this is otherwise. Perfect red is a blue-based red that I really like to put on top of more orangey reds for some reason. It's is a bit too sheer of a red for me to wear on its own (it's just impossible to get even) but as a topper for any other red lipstick, it just does something absolutely divine and makes it look incredibly sexy. It definitely transfers a lot, but still last quite a while; it also bleeds a lot without some sort of lip liner. Natural is a pink-brown mauve shade, one of the best neutrals I've ever found for my skin tone. It is a bit on the cool side for my warm-toned skin, but not by much, so I'd probably say that it has a neutral undertone. It doesn't bleed like perfect red, but it only lasts for 2-3 hours as opposed to 6-ish.

I had a sudden want for lipgloss and Nyx usually doesn't disappoint. I have 112 Natural (warm brownish-pink), 160 Tea Rose (mid-tone rose), and 163 Pink Rose (pinky coral with multi-colored microglitter). Just to give an idea, my lips are full and very pigmented (upper lip is much darker than my lower lip). I can wear Natural on it's own but I wanted it to be more vibrant so I put a little concealer on my lips to lighten it--same thing for Tea Rose. Pink Rose, on the other hand, would have to be worn with lined lips (I tried it with Nyx lip liner in 858 Nude Pink) and it is PERF but is otherwise kind of disappointing. Kinda makes me sad because it really is such a beautiful color when swatched but is super sheer on its own. I'm trying to be optimistic about it and just wear it by itself in the summer. I hear a lot of people rave about 115 African Rose (which is a very vibrant deep-purple fuchsia with blue shimmer) but I don't think Ulta carries it (I could have sworn I've seen that color there before though). I will definitely have to order it. This is a lipgloss so I don't expect it to stay on for super long, and I'm fine with reapplying. It does have a smell that is off-putting to some (to me, it smells like what a cherry Jolly Rancher tastes like if that makes sense lol) but it's gone once applied. These lipglosses are good for a sheer pop of color and could be AWESOME on top of a lipstick or lip liner. If you want a lipgloss that has a flat color (with no shimmer or glitter), I would go with Nyx Butter Gloss (another favorite of mine). Hope this helps!

I have clear, color 103. This is great for a clear, shiney lipgloss. I buy this from almost every brand - MAC, Bobbi Brown, Sephora, Wet &amp; Wild. This is a really shiney finish. Sticky as expected but decently long wearing. I removed 1 lippy because the taste/smell is so gross! Smells like Luden Cherry cough drops to me &amp; makes me somewhat nauseas :(