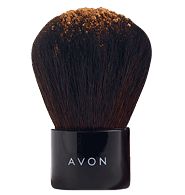 This brush blends evenly and is very soft and smooth. It has nylon bristles which help perfecting your makeup application. I LOVE LOVE LOVE this brush &amp; will be ordering more of these pro-quality brushes. They work just as well if not better than Sigma and a fraction of the price. I hated waiting for shipping since you have to buy these online, but so worth the wait!!! I ordered mine from my avon representative!!! https://kristinangarza.avonrepresentative.com/

Just felt like reviewing this because I just received a new one that's a billion degrees better than the brush I bought from them 2-3 years ago...so Im fairly certain they redesigned their brushes within the last couple years. In fact I still have the old one (it was collecting dust in my makeup brush graveyard) and compared them and the hair isn't even the same color, and its MUCH softer, seems somewhat fuller, denser and overall yummier. About the old brush I agreed with all the negative reviews on here-scratchy, shedded, the bristles splayed out kinda weird, shockingly small. This is the same size as the old one, but since Ive become used to and now prefer small kabukis like this-love it. It feels and looks pretty much exactly the same as my travel sized eco tools kabuki, which is my favourite everyday brush for loose powder. Anyway, nothing hugely special about this but I just felt like giving an updated review for anyone contemplating this brush since I noticed all the negative reviews are from 2012 or earlier. For a $5 kabuki brush its superb

very satisfied with the kabuki brush. my previous one was longer, you just have to get use to the small size. easy to use

I bought this just a few weeks ago and was so excited to use it. Washed it first and it was shedding crazy. I thought it would probably stop shedding once it has dried. Unfortunately when I used it, I had some brush bristles on my face, it has not stopped shedding. I find it a bit scratchy on my face also. I love Avon skincare products but this one I'm not loving at all. I'll try to use it again, crossing fingers it will work fine next time. :)

I bought this once, it got stolen, and I replaced it again. It was quite good for the price so I thought, why not? This brush goes on my cheeks rather soothingly, but not as smoothly as my high end brushes. It does have a couple of fall outs but not too much. I mean, you do get what you pay for. But it's not such a big deal and I love applying my blushes with it and my face powders. The bristles are packed together quite nicely and it makes it extremely voluptuous.

I just received mine this morning, so naturally i pulled it out of the packaging &amp; applied it with my mineral powder foundation. I found it to be a little scratchy, but it did picked up powder well &amp; applied evenly all over my face. I thought the stiffness of the bristles is excellent, only because i hate when they start to fray. I was suprised there's no lid, or cover of it of some sort. Not sure what i would expect to look like, but i expected a lid that wouldn't cause the edge-bristles to spread out. I don't think i'd buy the product again, but i certainly do like it as it serves its purpose and was relatively cheap. The packaging wasnt all that fancy, i was expecting a print of some sort or atleast the black glossy boxes that avon usually gives. Although, the product is what matters not the packaging.

This is one of the worst brushes I have ever bought. It is so rough, scratchy and way to small to provide god coverage. It can make even the best quality product look awful on your skin. I am an Avon rep and always tell my customers not to buy this brush. I have absolutely nothing good to say about it. Very, very disappointing.

This brush is horrible if you want to use it as an all over face brush. However, it works GREAT as a blush brush. It is soft enough and grabs color quite well.

have it and dont even use it...lol

Well...this product is confusing for me. It's slightly harsh on my skin but it hasn't shed one hair so far &amp; as for coverage and distribution is pretty good when used with mineral foundation. I was expecting a better quality packaging.