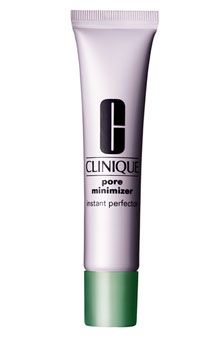 This has been an HG product of mine for years and I'm actually devastated it was discontinued. People that have complained it doesn't work did not use the correct application to fill in and disguise large pores. Using a concealer brush (this is important for precision) to tap into pores, allow it to sit for a minute, and then gently pat it in to blend, this product works miracles. Just be sure it's applied after foundation so you don't rub it off. It fills in small and large pores to create a near flawless complexion, although nothing will completely disguise large pores. I just can't believe Clinique discontinued it. When I heard the news, I purchased 3 tubes. I have found nothing that compares with it. :(.

I don't think they make this one anymore. This is the one in the pink tube. WHOA matte! It makes my t-zone soooo smooth matte and pore-free. Doesn't last ALLL day but haven't found anything that does so 5 starts. So silky and beautiful under makeup. Gona compare to POREfessional next will update.

This stuff was sort of a letdown. I have HUGE pores on my T-zone, especially my nose, and for YEARS I've been trying to find that miracle that will either reduce their appearance. I know they will never go away completely, but this didn't seem to help much. Sure, it did help some of the smaller pores I had disappear on my upper cheeks, but in general it didn't do too much. A good thing about this product is it didn't break me out and I am very sensitive and prone to acne. It also helped with oil production, but seemed to have a drying effect which I didn't like. In general, I'm still sort of on the edge with whether I would buy this again or not, and so far I probably wouldn't. It costs too much for a tiny little tube.

I love this product. There is nothing like it! I've been using this product for years and it is like the Mr Clean eraser for the face. It makes the pores virtually disappear. I have oily skin so I don't wear foundation. ..just pore minimizer. ..and my skin looks amazing every time..i will always use this product. ...

This is my first review ever and I wrote this just to beware you of making the most terrible mistake of your life. In short this is the WORST WORST WORST thing I've ever come across. This primer or lotion whatever it is does ABSOLUTELY NOTHING to your pores. It does not hide even a single pore infact it aggravates them soooooooo much like they would have never looked before. When you apply it gives a creamy consistency which applies smoothly. Then when you try to blend it with your fingers there is a whitish cast that does not go. The product just does not blend into the skin and looked like a flake of dandruff on the skin. It looks HORRIBLE. Moreover this is extremely unhealthy for the skin. I experienced it the first time I put it off with my makeup remover. Fuck man! You have to believe me.. My face looked completely fucked up! The pores were triple the size with my blemishes increased drastically &amp; sooooo many zits with redness. This was the worst thing I ever did to my face. Very very very disappointed with you Clinique. Wasted 1700/- for nothing. All in trash. Im not using this disgust on my face EVER and trust me if you have a problem with pores go for something else like Estee Lauder but NOT THIS. I know it can be expensive but there's definitely nothing more precious to us than face so please avoid such fake stuffs and go for something natural. This contains silicone that in someway or the other shows in the pores and turns face red making your state worse. I feel this horrible product should be banned. It is DISGUSTING. I SO WANTED IT TO WORK BUT CLINIQUE YOU FAILED BADLY THIS TIME. PLEASE SAVE YOUR MONEY FROM PUTTING IT INTO A WASTE LIKE THIS. thankyou &amp;#10084; I hope this saves you :)

I have to be honest, I haven't used this primer in years so when I pulled it out of my drawer to use again, it got this different funny texture, almost dry. It has a bit of color which I don't mind, but I would imagine others would. It doesnt have great staying power, which is why I use a primer. It's definitely not as good as the smashbox photo finish face primer which I love. If I'm just going to the store or something I will use this primer because it doesn't have as great as staying power as the smashbox primer. I never really use this and I don't recommend it.

This product makes my face even greasier by the end of the day than if I don't wear a primer at all. As an added bonus, as my makeup slides off of my increasingly oily face, the primer seems to cause the makeup to actually settle into my pores (which haven't been filled with primer, obviously) and makes them stand out even more. I can't believe I paid money for this product! I had read such great reviews in several magazines and decided to give it a try. The Clinique in my are will not give this out as a sample, which I found odd because I have never found a product they would not let me sample. Now I know why....it's just awful. Perhaps it works for people who have large pores from having acne as teenagers, but no longer have oily skin. But as I said, this actually made my face much much oilier. Normally I have to blot around lunchtime and again around 3pm. With this product I found that I could either be extremely shiny or I could blot nearly every hour. At first I thought maybe I was putting on too much or too little primer, so I experimented with varying amounts, and even tried not wearing foundation, just powder over it, and also tried just wearing foundation without powder....with pretty much the same result every day. I tried putting it on and letting it &quot;set&quot; before I put anything over it. I even tried mixing it in with my foundation. I tried applying it with fingers, sponge, and a foundation brush. Nothing makes this product work for me. On the plus side, this did not cause me to break out at all, which is one bonus that it has over pretty much every other primer I have tried.

Good under makeup but it doesn't do anything but make my skin a little softer.

i have pretty oily skin and i had some high hopes for this stuff but it did nothing but let me down... it does not control my oil what so ever. i like the texture and don't mind the smell but my goodness this did nothing at all for me, so i wasted my money.

I love it! They dont sell it anymore where I live... I finished 2 tubes of it. It makes my skin smooth and fills pores as I use it before my foundation and the foundation doesnt patch around my pores.