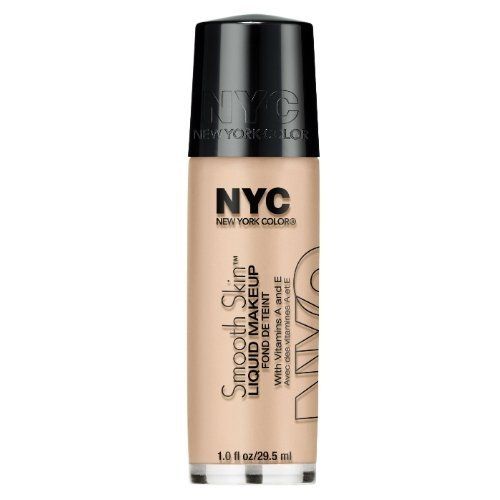 I own literally all high end makeup and normally use Becca complete coverage foundation, or Nars sheer glow. A friend of mine just got into makeup ( lived as a man up until maybe three months ago, now is a woman), gave me this because they didn't turn out to like liquid foundation. I ran out of my Nars summer foundation and it's September so I am so not buying a new $45 darker foumdation. So I assumed this would be terrible because it's gotta be lIke a tenth of the price of my other foundation, but it's actually really good. Now granted, I don't have many skin issues but this works perfectly fine for me. It lasted for a good amount of time even without setting spray, didn't emphasize texture, had nice medium coverage, and didn't transfer. I disagree with people saying this is ultra thick. It's not any thicker than my Becca or lancome foundations. I think it's about the thickness of Kat Von D foundation. No, it's not watery, but not everybody likes watery foundation. Again, I don't have much to cover but I don't agree with the claims that this is awful. For the price it's more than adequate. I have to say I was very pleasantly surprised, and this is now the only drugstore makeup I have in my makeup bag. Not saying that to brag or be obnoxious, but to say that I fully expected to hate this, but it actually turned out to be miles better than a lot of foundations I've tried, including 3 by Bobbi brown, one by urban decay, and one by benefit.

Horrible foundation. Very thick and didn't blend easily on my skin. I have dry skin and felt like it dried my skin out even more. Felt like I was wearing a mask. Never again!

Do not waste your money on this. First of all, the packaging has a terrible design because it's a glass bottle without a pump. I had to dip a qtip in it to apply. Then, it oxidizes to a pinky orange and it broke me out. It's very thick so I guess it has good coverage but still not worth it.

Awful! This was difficult to get out of the bottle due to it's thickness. The coverage was non existent,the blend ability low and the finish made my skin look dull. Pass on this one.

I really do love this foundation iv been useing revlon a colorstay as my go to foundation along with macs prolong water- proof foundation and it was great for awhile but although the coverage was great on my Acne prone hyper pigmitation skin I was very dry mind you I use the one for dry skin also it would cake up with my setting powder and well...not look so great and trying to remove it at night was a nightmare oh it stays alright and I believe the lingering dry cakey makeup on my skin was causing a viscous cycle of break outs. And my next favorite cover girls clean sensitive foundation was reformulated and dose not smell nice. This led me desperately searching for an everyday foundations hat wouldn't break the bank so on a whim I bought NYC smooth skin parfait the label read no comdagenic and oil free, so for 5$ I said why not? When I got it home I was pleasantly surprised that the foundation cap was equipped with a tiny little spatula to scoop out the product. The next thing I knowticed was that I was fragrance free,next was the test as soon as I applied it to my skin I instantly knowticed it felt nice,like a high performance moisturizer it was soothing to my skin I can't believe I actually liked the feeling of putting on makeup. And I am an everyday foundation wearer. The coverage was great and smooth just like the label said I appily it with a foundation brush. And it works well with powder not cakey at all. I'm also happy with the staying power and I can remove it at night too!! The only downside to this foundation it that it dose oxidize I picked up the shade nude and I am a fair Neutral skin shade so I advise going up on shade lighter that normal if you don't like ornge tones. Going back for the ivory shade but as a makeup junkie I can say I really do love this foundation ❤️????

I'm really shocked. This stuff was....great. I was really skeptical but I have used it enough now to be a believer. I have this in classic beige and it is perfect. I typically spend a little more on foundation because my skin isn't great but this has become my replacement. It doesn't feel thick and gross on my skin like some of the others I have tried. I was also a little thrown off my the paddle like applicator but it has also grown on me too!!

Love this foundation!! It has been around in my life for a while: my mom has been using it and still is. It's not a bad foundation at all. It has light to medium coverage and it hasn't broke me out. It's very thick, so I suggest you place it upside down to get the product to go down. Overall, it's a bargain and will buy many times in my future. :)

This foundation is soooo thick!The foundation doesn't come with a pump so you have to use a brush or spatula to get it out of the bottle. The overall foundation gives you a light to medium coverage. It only costs about $3 which is on the cheap side and worries me about what I'm putting on my face. OILY SKIN GIRLS STAY AWAY. The foundation does give you a natural smooth skin look but I have never had a foundation make my skin so oily. I can go 3-4 hours before a touch up on any other foundation but this one I have to touch up after an hour. I used it in the winter time when my skin was on the dry side and it helped get my skin &quot;moist.&quot; Wouldn't repurchase or recommend for oily skin girls.

Okay as a foundation with medium coverage, but like most foundations, it settles into my pores and makes me look dry. My skin texture doesn't work well with foundation or powder, but I keep living in hope... Anyway, I also couldn't get this out of the bottle without a qtip. It simply won't run, slide or ooze out of the glass neck. It's so thick it should've been packaged in a jar. Not everyone has said this, so I wonder if the older it gets the thicker it gets and I just got an old bottle? Anyway, it's not worth the effort or the $4. Wet and Wild or ELF both have foundations just as mediocre and for less, so skip this one.