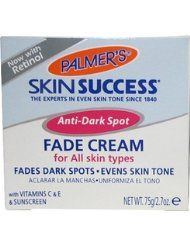 I can't find the soap review, so i guess i will post my review here in the cream section. I am currently using the Plamers Skin Success Eventone Fade Facial soap. I have only use it 3 to 4 times and it makes my face very moisturizing. I dont know if i am allergic to this soap or not, but every time i use it i wake up with running nose and sneezing. The smell of the soap itself is not too over powering, i can handle it. I had the cream, but it's hard for me to go through the day without feeling icky or touching the cream, or at night it will get on my pillow case. So i gave up on the cream and then i found the soap version. I just hope the soap will work as effectively as the cream. I will update in a few weeks to let you guys know if it makes my freckles and scars disappear or even fade.

I used this a while ago to try and target hyperpigmentation and acne scars on my face, unfortunately it didn't work and managed to break me out. None of the spots faded at all, and I used it regularly everyday for quite a few weeks.

As I live in Hong Kong, this product was pretty pricey. It was roughly $150 HKD, but it is generally anywhere from $4-8 in Canada and the US. But it works so well. I've been using it for about three months now, and I've always had to deal with hyperpigmentation scarring after any pimple on my face. It took me a little longer to see results (about a month), but it's worth it as I now use a lot less foundation and concealer on my face. It doesn't take away redness well, only dark spots, but it does help fade some. The packaging isn't great - the tub itself is pretty heavy and I know some folks aren't too into having to dip their fingers into the tub, but it's alright. A little goes a long way. I'd definitely buy this again when I run out. :)

I bought this fade cream the other day after reading reviews about it here. I have used it 3 or four times (two days). I have slightly darker pigmentation on the top of my cheekbones and a ton of freckles on my lower jaw due to apparent sun exposure (though I am a vampire and rarely sunbathe and wear my moisturizer with spf) I put it twice on the spots (or three times) and once all over (for the freckles) I think that my face looks a bit lighter already! I'll keep using this and update my review as needed. So far so good. Though I would not recommeng getting this in your eye. It hurts really really badly. Mine is still stinging hours later after flushing with massive amounts of water. one lippie off for the pain and icky tub.

I have used soooo many products to try and fade my melasma on my face, particuarly the part that is above my top lop that looks like a dark mark/moustache.... I have used too many to name but many ones that were expensive like Meladerm which done nothing and cost me a small fortune! Eventone Fade Cream may not be as natural as soon of the products but I have started seeing results after 2 weeks of using twice a day and I reckon another few weeks and you will hardly notice the dark marks above my lip! Melasma is a horrible thing to have it has made me very sad and upste but products like this are excellent for helping the marks fade.. Definatlely try it if you suffer from anything like Melasma.

I had two brown patches above my upper lip that looked like a mustache (hormonal?). This product worked for me after using for about a month..used morning and night. It takes a while of consistant use to see progress. I took off a lippie because of the amount of time it takes to fade them, but they did fade and now it's just once a day for maintenance...or every other day. Give it time to work. Also, the product will change colors in the jar over time, but the product is still good. Had the same jar for over a year now.

Omg! i am amazed! i've been using this product for 5 days and the surface acne scarring on my face is fading dramatically. The hyper-pigmentation on my chin is also fading very fast. At this rate i should be scar and hyperpigmentation free in one more week. I apply it at night after my egg yolk mask. i think the mask may be helping a little but once i added the palmers fade cream to my nightly routine the scarring rapidly reduced. i would recommend this product to anyone with light skin. cons: i have heard that this cream may not bee good for medium or dark skin tones. also, this product did give me white heads, but it was worth it to me because i've been struggling with my scarring for over 4 years. the white heads are removable with an egg white mask.

I didn't have high expectation because it was so cheap. It really reduces all the discoloration of my freckles (hands). Perfect~

To begin I bought this product to fade some acne scars. I purchased this at Walgreens for $5. I started using it immediatley the next day. I applied it to the same area day and night for 4 months. Then suddenly stopped the use. I felt like that one area was becoming too light which was my own fault. Because I layered more than directed to get fast results! Though it did do it's job well &amp; it didn't break out my skin, though it was kind of oily. I should've followed the directions &amp; instead used a qtip and applied it to that area only whether it's only a lil dot or not!! This product is pretty powerful. I like the results. It's a decent product that did lighten up the scars...but i'm sure if i kept on using it that area, my cheek would've been washed out and pale!! But now I use the rest on other parts of my body and it works perfectly fine. CONS: It turns a brownish color after awhile which it says it's still safe to use! Don't like the jar much having to dip my fingers in. PROS: Smells reallly good!! Great pricing! Does what it claims! JUST FOLLOW THE DIRECTIONS!!