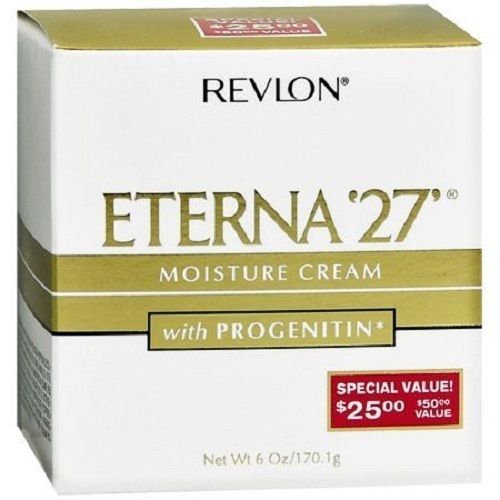 About 40 years ago, I was dating a young Frenchman. His very elegant mother &quot;of a certain age&quot; always wanted him to buy her Eterna 27 in America and ship it to her because it was so much less expensive here. Now I am a woman of a certain age (60), and i have discovered just why she loved it! I use it only as a night cream after tretinoin cream. It is rather heavy, but that is what I need overnight. I wake up with skin that is glowing and smooth, rather than pasty and dry as it used to be. People are telling me that I look decades younger than I am, truly! I hope they never stop making this product.

I stumbled upon this cream at Walgreens.com. I bought it because 70% of the reviews were the highest rating and I am thrilled I did. I am 69 and I have seen a dramatic difference in my skin immediately and it keeps getting better and better...Try it you will like it!

I have a jar of this product which I purchased at the recommendation of an older co-worker who uses it regularly and she swears by it. I have had the the same jar for about 2 years and it is still very thick and oily looking, it has not dried out at all. I have combination skin leaning towards being very oily in the spring and summer months, changing towards slightly oily w/ dry patches in the fall and winter. I use this product only at night when my skin feels very dehydrated and flaky. I am a nightly user of Tretinoin and this is really the only moisturizer I have used that helps with the dryness from using this for the treatment of acne. The texture is very heavy and oily but I take a small amount and warm it between my fingertips and apply it to my neck, my chin and upper lip area, my jawline, up around my ears. I apply it in a smoothing/patting motion. The product has a very strong and distinctive fragrance that does seem to slightly dissipate but not completely. I can still smell it in the morning when I wake up. I myself have never had an issue with irritation, acne, or clogged pores from using this cream. This review is for the Eterna 27 cream with the progenitin, not the day cream which is still readily available at most stores that carry Revlon cosmetics. This cream is a nice old fashioned, emollient moisturizer but is not really anything special in my opinion. Nor will it really do anything very anti-aging other than combat dryness and give the skin a bit of a sheen from the rich emollients. If you have very dry skin you may want to consider trying this cream unless you are sensitive to fragrance. Now I have a question for anybody who may be able to answer it for me. I read on another reputable site that this version of E27 w/ progenitin in fact is no longer made with that ingredient included in the &quot;recipe&quot;. Can anybody tell me then why is it still labeled on the packaging as containing this ingredient?

I like everything about the product but the smell. It's so strong! I don't even use it every day because I can't deal with that scent on a daily basis. I am trying to use it up and I would repurchase it if they changed the scent. It's just way too strong and unpleasant for my taste.

Years ago my mother used a moisturizer, CHR Cream, made by Ultima II. Parent company is Revlon. Ultima II was pulled from the American market, according to Wikipedia, in 2001, and discontinued in Europe in 2008. However, still available in the Far East. Too bad it isn't available here because I remember their lipsticks were gorgeous colors, and CHR helped keep my skin hydrated during winter. While reading on the net about Ultima II, read Revlon Eterna 27 is the same as CHR, so imagine my surprise when I walked into Walgreen's and they had a sale going for Eterna. It's been approximately twenty years since I used CHR, but I don't remember it being as fragranced as Eterna, nor as goopy and thick, when first applied. I didn't find the fragrance pleasing, and it never completely dissipates. The texture is thick, very thick. When first applied, there's not a lot of slip because of its consistency. This is a moisturizer to tap or pat on the face. Within a couple of minutes, the thick consistency begins dissolving into an emollient moisturizer. I applied this before going to bed, and the next morning my skin was somewhat hydrated. I then applied it before putting on makeup, but it takes too long to absorb for a morning makeup routine, imo. It does plump the skin for a short duration, but not enough to compensate for the odor and thick, goopy texture, when first applied. Will not repurchase, and for now, have tossed it aside.

Terrific oil in water based moisturizer. Costs a fraction of anything (think La Mer) comparable. I love it in winter--in summer I use something lighter. Really great product and a real bargain as well. Thanks Revlon!

First, our Walgreens carries the larger size and they keep it locked in with the perfumes, usually the smaller jars are on the bottom shelf of Revlon products. This cream is unbelievable and even when I stray to try something else I always come back to Eterna. Yes, its thick, but it does sink in and your skin will feel soft and smooth the next day. I am 64 and hope I never have to go without this moisturizer. BUT you may have to experiment with the amount you apply, any excess use it on your hands. I gave this one lippy for price, its not expensive and lasts forever.

ETERNA 27 ABSOLUTELY WORKS! The BEST face product I have ever used hands down. My face is living proof that it works....hardly any wrinkles, super soft, no blemishes, healthy, and I do not have to wear foundation if I do not feel the need. And it works so well on the neck as well. I am 52 and look about 40 as I am told. I think this product has been VERY helpful in maintaining youthful skin and I will not use anything else! NOTE: You can purchase Eterna 27 at Walmart in the Revlon cosmetic aisle as others have stated they have a hard time finding this product.

i just love this cream. Make sure that you get the Eterna with Progenitin, the Day cream is different. I'm 63 with the usual parched skin. After the 1st application, my skin immediately looked plumper and more hydrated. And believe me, I've tried enough skin treatments to fill a large bathtub! I just wrote to Revlon's customer service and begged them not to discontinue it. I bought my jar online. I'll be updating as I continue to use this.

This stuff is crazy. Crazy in that it's so heavy, yet it actually sinks into my skin. Because we have natural gas heat in our home, and because I have a bad habit of going running without proper protection on my face, my skin is sometimes terribly flaky. I've started a regimen of boots microderm scrub, Somme institute a-bomb and this (with progenetin). It is a quick-fix that makes it look like I never had any flakes. I don't use it every night and that is probably why I got the flakies in the first place. I purchased because of the reviews here and am glad I did. I have La Mer and Nivea (still convinced they are one in the same) and not only do they multiply the flakies, but have started giving me huge, painful zits. I'll stick with this as it does exactly what I need it to. It only takes a bit and it is a great value. It does have a curious smell, but it has grown on me. Surprised my sensitive skin hasn't rebelled,