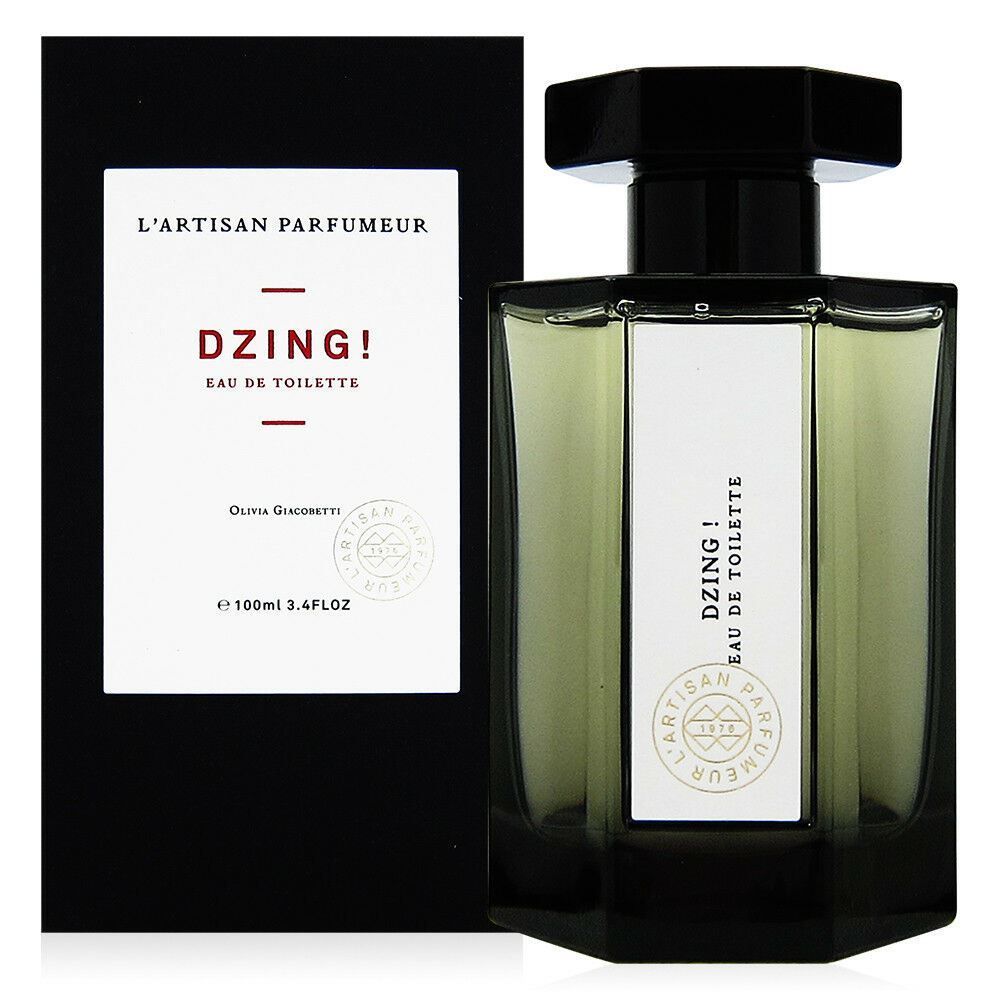 This thing is extremely weird. Opens like a veterinary clinic: medicine and animals. Middle notes are a big jumble, there's a lot going on in here that I'm unable to identify but there is some sawdust, motor oil, even more animals, leather, maybe hay? Dries down to something sweet. Not a fragrance I'd want to wear again but kudos for originality, that was a hell of a ride.

I've never been much of a fan of sweet oriental perfumes. It's not that I don't care for the smell of vanilla--who doesn't love the smell of a sticky black vanilla bean?--but that personal fragrances based on those notes have a weird way of making something deep within me recoil and flinch away from them. Perhaps I was simply far too traumatized by the 1980s. I lived in New York City at the height of the loud orientals era, you see, and I commuted to work by subway. By RUSH HOUR subway. So as hesitant as I am to draw the ire of the perfumistas by admitting this, I was indeed one of those people who heaved a giant sigh of olfactory relief in the 1990s, when all of those new cool quiet "fresh and clean" aquatics finally replaced the deafeningly loud warm-spicy-yet-also-sickly-sweet-and-don't-forget-the-absolutely-*filthy*-come-hither-animalics! melange as the prevailing smell of the crowded morning subway car. I know, I know. I'm so sorry. Anyway, the point is that I didn't really expect to care all that much for Dzing! As far as I could tell, it looked to be a warm, spicy, candy-sweet, vanillic gourmandish yet also kinda fecal-filthy oriental. All of the things that I thought I didn't care for in a fragrance. But then I gave it a sniff. And then another. And then another...and another...and another... And then, only a week after my first whiff of Dzing!, I had somehow managed not only to use up my entire sample, but also to shell out more money than I thought I would ever be willing to pay for 100 mls, just to have a great big stonking bottle of this for my very own. I just couldn't help myself. I simply had to, you see, because this remarkably addictive fragrance smells like so many of the very best things on earth: of well-kept stables and tack rooms and warm sweet hay, of a healthy horse's neck when you nuzzle it after a good day's ride and the way that your palms smell after that same day of riding (the leather of the reins combining with your sweat and the fine fresh horse sweat to make something new and strange out of the once-familiar skin-smell of your own two hands). It smells of fresh-cut pine boards, ancient varnish, the tasty salicylated green inner layer of black birch bark; of sarsaparilla and sealing wax; of the inside of a lacquered Chinese false-bottomed box. It's the smell of schoolbook covers made from brown paper grocery bags and decorated with thick and redolent permanent markers, and of the enormous cardboard refrigerator box your parents let you play in when you were very small. It's all of the good smells of childhood and none of the bad: it's fatwood and toffee and that fried dough with powdered sugar they sell at the state fair. It's that funny brown benzoin your grandmother once dabbed on your scraped knee to make a bandaid stick better -- and it's also the weirdly rubbery old bandaid itself. It's dusty boxes in the attic, a forgotten cake of rosin found inside a velvet-lined antique violin case, shelves upon shelves of old used books, the fur behind the ears of a sun-warmed purring cat... It's all of these olfactory memories at once, and yet it doesn't...quite...match any one of them perfectly. It somehow manages to be both intensely allusive and profoundly nostalgic, while never quite settling on any single precise referent. And in the end, of course, like all the best fragrances, Dzing! smells like nothing but its own unique self. I am absolutely, head-over-heels in love with this fragrance, but the thing is, I can also recognize that many of the reasons others have given for finding it gross are pretty much accurate. There *is* a fecal aspect to the smell of even the best-maintained stable, and while I may find that tang of well-aged horse manure to be not only inoffensive but even actively enjoyable, I can certainly understand why someone else might be violently averse to the idea of deliberately scenting themselves with it. Cat fur, similarly, is not a smell that everyone enjoys, nor is attic dust, and I am sure that there are many for whom the words "horse sweat" do not precisely ring out as a positive endorsement of a ladies' perfume (especially since, as my mother always told me, while horses are lucky enough to be permitted to sweat, and gentlemen may perspire, ladies must never do anything more than "glow"). And though I've always loved the turpentinic smell of rosin, I've never heard of anyone rubbing it all over themselves in a futile attempt at budget DIY perfumery -- unlike, say, vanilla extract from the kitchen, which very many young people do try to use in just that way. So yeah, I get what others might find disgusting about Dzing!. Honestly, I really, really do get it. But to me, it is just hauntingly beautiful.

Dzing is like Slipping on a Skintight Leather Catsuit The Leather note of Dzing give off a Fluid and Supple wetness like Second Skin, I detect a good amound of Civet which is missing in the note Pyramid Giving it a Dirty Animalistic Edge, As Dzing Dries Patches of Musk comes Steeping though the Crevises of Wild Ox Assaulting your senses into Primal and Unhibited Territory Pure and Unadulterated, Incense seems to be Overshadowed or Upstaged by the Leather Note, but Supports it's self by being a Mysterious and Esoteric Underpining of Dzing! Rarely Fragrances Conjors me to a sense of Metal Masturbation Dzing happens to be the only one, I Whoud describe Dzing! As a Monk with Sexual Distractions His Represed Fantasy of an Image of a Woman in a Skintight Black Leather Cat Suit Her throne is a Glossy Black Leather Sofa as she reclines he can hear the Crinkle of the Leather as he get aroused as he Slowly Carresses her thighs and she slowly leans over gentily kisses him then he's Awoken to Reallity! Dzing Is Sprituality and Sex

It's sad to admit it, but I originally bought this scent to seduce a guy who worked as a thoroughbred trainer--I bought into the promise of barnyard smells and hoped it would subliminally attract him to me. Ha! I digress... The man is long gone, but this perfume is the single cosmetic item that I have been most loyal to--seven years and counting. I am on my third 150 ml bottle. This scent is an experience. Don't let the animal connotations put you off, but do take note--there is nothing flowery,powdery, or recognizably feminine about this scent. Dzing is truly androgynous and all the sexier for it. I think the barnyard comparisons are the result of high suggestibility and romantic thinking on behalf of the wearer. Dzing is a perfectly balanced blend of vanillin (the straight dope extract--not the B&BW variety), suede, and the softest musk. On me, this is a skin scent that lingers close to the body. Dzing is a reference perfume and although it is a work of art, it does not take itself too seriously to be worn with blue jeans and a well worn t-shirt. If I were allowed only one cosmetic, this would be it.

Dzing to me is smoke, leather, straw with some vanilla and animalic smells hiding in the back and peeping occasionally. very unique, very potent, very sexy and beautifully done with remarkable staying power. (gets 4.5 points b/c it's too BIG a perfume for me but still can appreciate it)

Ok... I only sampled this, but so far I think I could buy a bottle. I avoided this fragrance because I thought it had a stupid name and I never cared about circuses. The notes didn't sound that interesting either. I. Was. Wrong. This is really very beautiful, a true leathery vanilla that doesn't *try* too hard to be leather or vanilla. Dzing is loaded with resinous notes, and I wouldn't be surprised if it isn't truly either leather or vanilla, but rather replicates the feel of these things with plenty of benzoin and musk to keep the whole thing feeling mysterious. I'm really in love, and almost not interested in trying any other samples. This is basically a much richer and more visceral version of Bulgari Black to me. Black continues to be one of my favorite scents. Dzing starts out with a sort of classic dry amber scent that reminds me a little of Regina Harris. I definitely get some kind of hay or coumarin note. Tons of benzoin. Then it's sweet musky suede all the way. Somehow this fragrance starts of dry and ends up damp. It will be hard for any other scent to beat this one for this fall I think. Edit: On second thought I'm taking one lippie off for the short lifespan.I wish this would last for hours and hours! Arrrrrgh....

To me it smells a little like Bvlgari Black, but I like the vanilla better in Dzing! It is weird, so may take a few tries to take to it, but it smells very good. A quirky smell with a funny name. I love the idea and I am so glad I got a full bottle.

Dzing! is a highly addictive scent that deserves its cult status, there is nothing linear or artificial about the way it smells, it is rich and organic, potent, without being heavy. Reminds me more of an old movie theater (popcorn, caramel, crushed velvet, old leather armchairs) than the circus.

I'm staggered I've never reviewed this - since discovering it last year it's completely changed the way I see fragrance. It's like nothing else you'll have tried - yes, it first smells like hay and animals, but the drydown....it's a gorgeous comforting vanilla that makes you feel safe and warm. The hay and animals fascinate me - it's not for everyone, but who wants their fragrances to smell generic? I can't believe they managed to bottle such a unique scent - I've no idea how they did it. I love plenty of other scents too - but every time I put this on after a gap of a week or two, I am always struck by how evocative this is, and how stunningly different to anything else I own.

In the small Lucky Scent vial I first received, I picked up all the candy-corn and leather notes; however in this larger spray sample from TPC I am getting a huge amount of vanilla. Nothing wrong with that; however, this could pass for Lea St. Barth easily (vanilla musky pleasant thing). My main gripe is Dzing's, and most L'Artisan fragrances' , lack of staying power, especially given the price point.