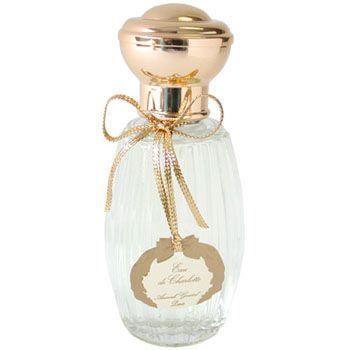 You'll find I have a particular affection for the Annick Goutal line (see my review of Songes). It captures my very cartoonish Midwestern sensibility of what it might mean to be &quot;French&quot;, in a sort of poodley champagney storybook way that I realize is probably not particularly accurate. But Annick Goutal IS French, whatever that may mean. It also is available only in major metropolitan centers in the US so when I am at an Annick Goutal perfume counter, I am therefore in a city which existentially means something to me, the kid from small town Ohio. And as long as Bloomies on Michigan Ave keeps the Goutal coming, I live in such a city. Eau de Charlotte, our scent for today, also piques my sense of false nostalgia as it was born in 1982 and I in 1981. There is no way I remember 1982 very well, but I have a vague sense of 1984 and 1985 and there is something particularly early 80's about this perfume. Plus I've seen the pictures. Our collective remembrance of the 80's seems hot pink in nature. Hairspray, shoulder pads and Madonna show up at 80's themed parties and sitcom episodes. MY 80's, the 80's of my childhood, was much softer with holdovers and hand-me-downs from the 70's. Mary Lou Retton hairstyles. Brooke Shields eyebrows. Madras plaid. Sensible brown sandals. Bible school crafts. Public pools. Herself the Elf. Strawberry Shortcake. And a general air of pastel. Even the photos of my youth have a hazy quality as if they know that life will shortly quicken in pace. Still, the phone dial was rotary. And you paid extra for the Disney channel. This is not, of course, the whole truth and nothing but the truth. Reality is far more complex. I don't mean to shatter the strawberry-scented warmly hazed image I've created but it also was at this time my father owned a red Ford Pinto. The ERA had failed. AIDS was reaching mass proportion. The Challenger exploded. Men still wore leisure suits. You could smoke in restaurants. I don't believe in the concept of &quot;the good old days.&quot; Go back far enough, and in the &quot;good old days&quot; I wouldn't be able to vote. Nor I am weighing those events against each other in depth, despair or significance. I was, as I mentioned, a toddler then so forgive me for not remembering all that. But this is about perfume after all. And while Eau de Charlotte is hardly the olfactory rendition of &quot;We Are the World&quot;, I do have affection for my happy childhood. And Eau de Charlotte doesn't need all this pressure. We'll let Dior's Poison handle the dubious job of representing the 80's. I have older cousins who were and are still beautiful and graduated in, respectively, 1987 and 1984 and I remember their makeup, boyfriends, and senior pictures quite well. Eau de Charlotte is the perfume equivalent of those photos. She is Mallory Keaton. Sheltered. Pretty. Stylish. And of a particular era. This perfume is well-crafted and a bit surprising. It manages to have notes of cocoa and vanilla without ever even toying with being a gourmand. It smells cool and breezy, but not in a Springy way. This is one of the first cool breezes of an approaching Autumn. While other reviewers emphasize the lily of the valley, for me it shows up as a brisk iciness that makes it the perfect scent for this time of year. The cocoa gives it depth, the florals keep it from being moody, and a nicely calm air of green keeps it wise and a bit studious. After all, Mallory was always smarter than she behaved. Eau de Charlotte would function well as an &quot;everyday&quot; scent. Even a signature scent for those who are monogamous (I've never been able to commit.) The term &quot;fruity floral&quot; has become somewhat derogatory over the years as it seems to be the default setting for cheap new launches and cynical flankers. Eau de Charlotte has both flowers and berries but is never cheap, never dumb, and always the freshly scrubbed optimist. The soapiness is gentle and pleasant. If I have any talent at all it is my ability to appear as if I have showered. Eau de Charlotte would add an air of innocently batted eyelashes to my lie. According to ad copy, Annick Goutal herself created Eau de Charlotte for her young stepdaughter who was a budding gourmet and loved blackcurrant jam. Today, perfumes aimed at young women are generally thoughtless at best, and insulting at worst. There is some hideous version of informal logic at hand: Women want men to like them. Men eat cake. Make women smell like cake. If Eau de Charlotte is how perfumers viewed a young woman in the 80's, then I guess I do have some nostalgia after all.

It's a damp and melancholic February morning in a French village and a charming elegant woman in her peach trench and light blue loafers opens the door of her pretty patisserie and sets a cream and pink pot of lily and mimosa flowers, the early messengers of the timidly approaching spring, on the bar counter. Very soon the festive smells of cookies baking in the back kitchen peacefully invade the shop and make it alive with notes of vanilla and cocoa, while she diligently proceeds to fill her soft pastries with berry jam and chocolate and cream. All her clients adore her and the joyful moments of guilty pleasure that her sweet treats deliver, another way to transform an ordinary day into a glory day, which is the real art in life, and the brief moment of happiness dilates all through the day and comes back at tides to seduce again and again.

I don't smell the jam or the cocoa. I smell straight up baby powder. It's not really unpleasant just not what I expected. Reminds me of my memory of smelling Hanae Mori butterfly years ago which was straight up wet baby powder with a tinge of something sweet. I bought this unsniffed and I was hoping to get the cocoa and jam scent since that sounded so lovely. I really enjoy petite cherie so I was expecting something... different. That said, I will keep it because it's a cozy powdery scent. One that I think I could probably layer with a Jo Malone or something. I do get where some people say they get roses.. the powdered rose with a tinge of sweet something flitting around is fairly accurate though not a straight up rose (like JM Rose for example). Edit: Weeks later. Yech. Pure straight up baby powder with some sort of sweet scent. I can't stand wearing it. Dissapointed.

to me, the most romantic of the goutal line that i have smelled......she leaves you wanting to keep spraying her alllll the time. i go on charlotte binges. i cannot say one particular thing about her except she seems to have everything i love about goutal in her all at once but in a very subtle way and with the powdery note that enchants me about goutal being KEY........i can spray any scent and overlap it with charlotte and make them all more feminine. she is the light breeze and lace of what makes goutal so special and i can only dream that as i collect each one i find another as special as she is. my love for charlotte is for forever.

i agree w/the baby powder comment- the first thing i thought of was wet wipes! no fruity/green notes at all.

I really don't get the green or blackcurrent notes up top. My first initial impression is some sort of baby product. Not baby powder, exactly, but baby skin maybe? Apricot and baby powder? Johnson and Johnson baby lotion? If you're into babies and the way they smell, then great. I am at once too old and too young to be smelling like babies, so- not for me. It does dry down nicely, and I do get a faint cocoa finish, but it's kind of like sitting all the way through a mediocre movie. (About a bunch of babies)

I really like this perfume. It's one of my favourites at the moment. Last summer I was really into Saffron James Nani, but now that it's winter I need something less light and in bloom. Eau de Charlotte has been in my sample collection for quite some time. I purchased a sample mostly for sentimental reasons - I liked the fact that Annick Goutal made it for her daughter Charlotte. That's a nice gesture. I think I didn't really connect with the fragrance when it first arrived (in the spring) in the way that I do now that there's snow. Like others have said here, however, Eau de Charlotte opens green. Then it dries down gourmand and becomes somewhat powdery and clean smelling. I like all of this, although I'm not usually into gourmand scents. Overall, though, this is an amazing scent - it makes me feel sweet and feminine and clean. I don't need to apply much - just a bit, or I'll get overwhelmed. I'll buy a full bottle once I get the money.

This is a really unusual perfume, but it is my favorite, and I have tried many, many perfumes!&lt;br&gt;&lt;br&gt; Eau de Charlotte starts out with a very green, shocking, herbaceous note. If the scent remained like this, I would not wear it. But this note disappears almost completely after just ten minutes or so, and is replaced by berry jam and soft powdery florals. The dry down is faint florals and cocoa powder. &lt;br&gt;&lt;br&gt; The dry down arrives quickly and stays for a long time, and it is such a soft, sweet, sophisticated skin scent that feels very suited to my personal style. It feels like a natural complement to cashmere, soft neutral tones, subtle makeup, and fair skin. It is young and fresh but luxurious at the same time.

I've tried the EdT, and I think it's a good scent, but not interesting enough to buy a full bottle. The opening is my favourite part; green with a touch of sweet berries. When it fades I mostly get gourmand notes: almonds, berries, some vanilla and jam. It's too sweet for me, but if you are into gourmands this is a good choice. Lasting power is average but there is not much sillage.