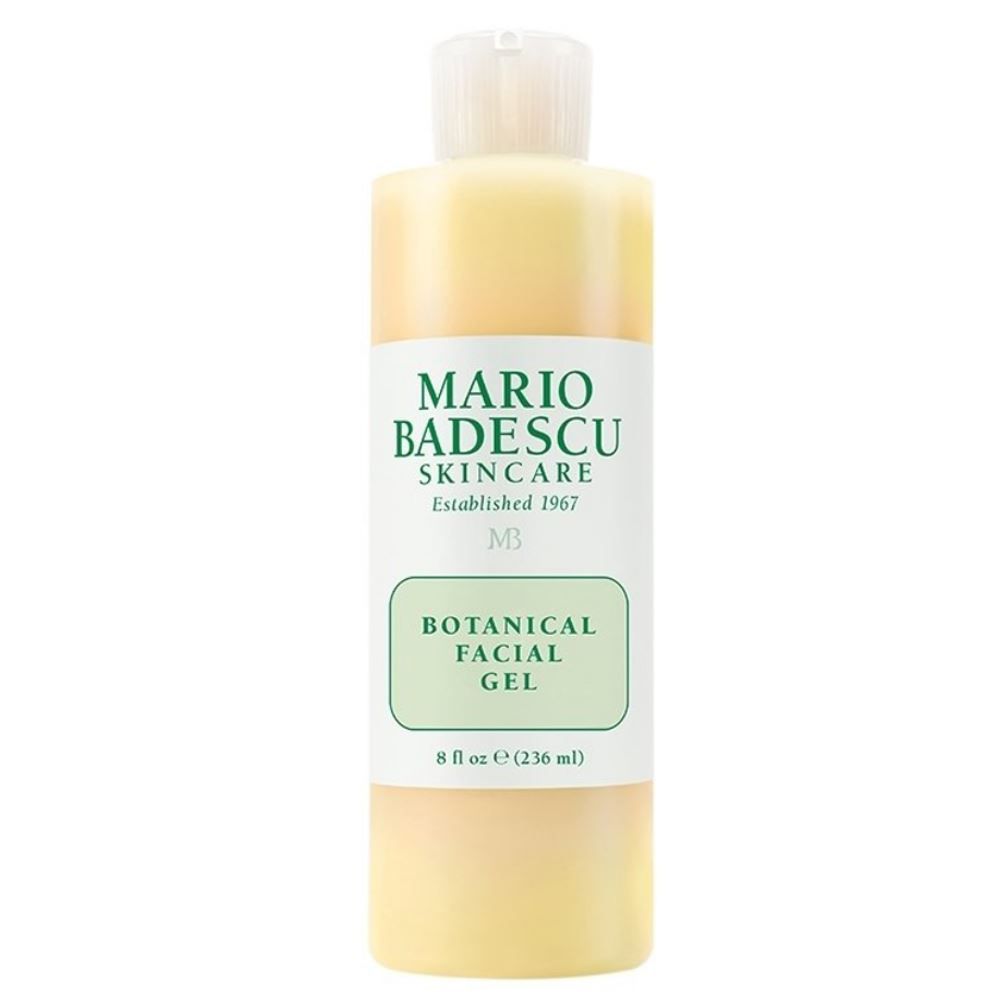 I have used this twice and it's already my favorite cleanser. The smell is good but sadly not as good as Enzyme Cleansing Gel. My skin is combination, sometimes very oily. My face looks so much better now and yes I have only used this 2 times. Will repurchase.

not a horrible product, but definitely not the best. I really like MB rose water facial spray, so wanted to try a cleanser. I have combo to oily skin. Even though my skin feels soft after cleansing, it takes quite a bit of product and water to wash my face and especially my makeup. it will wash off eyeshadow, some foundation and mascara...but gel liners? No way! I use clinique gel liner and dear God, does it just smear with this facial wash instead of washing away. I have used other non foaming cleansers before, and my liner gets washed. This, nope. Won't buy this one again. But, definitely wouldn't mind trying one of the others in the line.

This cleanser contains a great Alpha Hydroxy Acid, which is good for acneic skin and also fine lines and wrinkles. It helped clear up my acne more quickly than any other cleanser I've noticed. It did however make my skin dry around my cheeks and nasolabial folds (parentheses). So I had to use it every other day. BUT... this cleanser, I'm about 95% sure, is the cause of my eyelashes falling out! Like nuts! And my eyelashes are my pride and joy! They make my eyes pop and basically make me pretty haha! And yeah this cleanser was making at least 3 fall out per day when I only had 1 fall out per week before I started using this cleanser. Anyway, if you can manage to keep this away from your eye area completely, then it's a great cleanser. I mean, I had to use another cleanser with it to completely remove any like makeup or heavy creams, but other than that. I give it a 4 for effectiveness, but only a 2 overall because of the side effects :(

Horrifically bad cleanser. Does not clean your skin at all and it is left feeling dirty. I am used to sulfate-free cleansers and shampoos but I have never had this issue before. Also, the active ingredient is dead last in the list so you aren't really getting any skin benefit from this cleanser either. And, on top of this, it also broke me out consistently when I used it and when I discontinued use, my skin started to recover.

Best cleanser I've ever used! So good for my oily skin. Also makes your skin feel super soft and clean without feeling really dry. Is also very affordable along with mostly all mario badescu products. Shipping is also super quick! Definitely worth the money! The cleanser is a non-lather which seemed weird at first but I got used to it and LOVE IT! Smells like flowers and is not overbearing at all.

First Impression: I paid $12 USD for an 8 ounce bottle, which isn't bad. I use this cleanser every night, and I have had the same bottle for a little over three months now, and I have about a third of the bottle left still. I love the bottle (the little spout thing works well for cleansers and toners just NOT moisturizers), it makes it so easy to get out the perfect amount. I think this cleanser smells nice, slightly flowery, and does not bother me at all. Weirdly enough, I get this in my mouth sometimes and it doesn't have a horrible taste (not that I would go around licking it or eating it, I am just saying, for the occasional nights when this ends up in my mouth, it does not leave me choking or gagging). My Review: Before trying this cleanser, I was using the Clinique Liquid Facial Soap (part of the three step system) with my Clarisonic Mia 2. I decided it was time to make the switch because I did not feel like the cleanser was doing enough for me, and I HATED how the soap burned my eyes and left my skin feeling soooo tight. After talking to a Sale's Associate at Ulta, I decided to give this one a go. At first, like everyone else, I found the non-foaming cleanser to be a bit strange, but I really love it now! It is perfect for use with a Clarisonic, because it does not matter if I start on my forehead, there isn't a large amount of soap running down my face and into my eyes! Which is a definite improvement. I can't say whether or not it removes makeup well since before I use it, I use a Pond's towel makeup remover. I do know that when I take my brush off to clean it once I am done, however, there is a significant amount of makeup on the brush, leading me to believe that it actually does work. My skin does not feel tight once i have dried it off, in fact it just feels clean... I don't know a better way to describe it. Final Thoughts: I would definitely repurchase, but I think that I am going to try the Enzyme Cleansing Gel next. After taking the skin care survey on the Mario Badescu website and seeing that product recommended for me, I would like to give it a try. I love the sample that was sent by the company, but it was not enough to tell whether or not it did anything for my skin. And to be honest, I threw about a quarter of the product away because it was a nightmare trying to get it all out of the bottle. I do see myself returning to this in the future though if the Enzyme Cleansing Gel does not impress me as much as this one has. Ingredients: Deionized Water, Glycerin, Carbomer, Trithanolamine, Methylparaben, Botanical Extract, Germall

I got this as a free sample and hated it! I used this to remove my makeup at night and it didnt clean anything off of my face at all. (My face towel would be smeared with my foundation) I also noticed after almost a month of using this face wash, that my face would occasionally break out in a small rash. The sample bottle btw, also sucks and is difficult to remove the product once you start running out.

after being disappointed with the clinique 3 step system, I chose to try out MB products. I spoke with the retailer and they suggested this cleanser along with the grape fruit toner. it does not lather or foam like other cleansers but that doesn't bother me and my skin feels clean after using only a small amount of product. my makeup also is removed when using this cleanser unlike the clinique liquid soap. after about two weeks my skin is so much clearer, blackheads are gone and my oily skin seems to be under control. I have let other people try it and they like it too. at around $12 a bottle it's definitely worth a try!

EDIT: I now use this product in conjunction with the Special Cleansing lotion &quot;C&quot;, instead of the Seaweed Cleansing Lotion. I think the seaweed cleansing lotion was responsible for the tiny bumps around my temples because after the switch, the bumps are gone. I have been using this product for 4 weeks now, and I am quite impressed. I have combination (oily T-zone and dry cheeks) but sensitive skin that is pretty acne-prone. I blame the 4-5 cystic pimples I usually have on hormones, so I wanted to try a product that was less harsh than most acne treatments, something that would relax my stressed skin and make it healthier. I also used this cleanser along with the Seaweed cleansing lotion (I tried to find something really gentle) and my skin hasn't looked this good in years. I'm not sure if it's the vitamins in the &quot;botanical extract&quot; that are responsible for making my skin healthier and stronger, but that's my guess... I only use a small pea-sized amount, and I wet my hands JUST A LITTLE. I don't even wet my face (found the products sticks to your skin better this way) and I just rub it in, like i'm putting on lotion. I use circular motions for about a good minute or so and then rinse it off. During the first week of use, I immediately noticed a brightening of my skin. During the second week there was a bit of purging. A few big pimples (that healed quickly) and lots of little tiny bumps around my temples. But I kept using the product because my skin usually acts this way when I try something new. It's the 4th week now, and 90% of the purging has subsided. I have a few small blemishes that are still healing, ZERO painful cysts, AND my period starts today... pretty impressive. In addition, my pores have reduced dramatically and even some scarring has diminished. If you have never tried the &quot;gentle/stress-relief&quot; approach for combating acne, I suggest you start with Mario Badescu products like this one. I have always been unsuccessful with products that contain Salicylic Acid or Benzoyl Peroxide, possibly because they make my skin UNhealthier/weaker in the long run. I have added the Foaming Glycolic Cleanser to my routine twice a week in hopes to rejuvenate my skin, so far so good. I'm really excited about all the MB products.... If I get brave enough I might try some of their night creams...

I recieved this product in a sample pack from their online questionnaire. I've only used this once, so I will update if I see some results, but I feel the need to state that this non-soap, non-foaming cleanser will make you feel as if it's not working, but a pea sized amount was enough to give my skin that tight feeling (which I get from any cleanser, so I don't think this is a huge downfall for this product) so although it's not foaming, it truly does work! One lippie taken off for the extreeeeeeme smell. It was enough to choke me up.