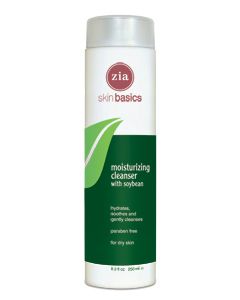 This lotion cleanser works very well on my dry-very dry skin. It's paraben free. I apply, gently massage in a circular motion, and rinse. My skin feels comfortable (not overly dry). I follow with serum and moisturizer.

i'm not sure why some user are getting burns from this? i'm on my 2nd bottle and this is my HG cleanser. i like a lot of zia products and they seem to work well for me, for the most part. i would stray once in a while to something else but always always come back to this plain little cleanser. it doesn't sting my skin (even though i have gotten burn multiple times from other products), and doesn't dry me out. the scent is barely there if at all and i just really really adore this thing and how it's really nice to my skin. :D i can't use cleansers that are too strong or drying and i hate buying different things all the time to try. i should probably just stop looking.

I was looking for a natural, gentle, effective cleanser and thought this would fit the bill. I was so excited to wash my face last night. I wet my face as instructed and started to rub the cleanser on. That is when the burning started. I noticed it on my cheeks and then on my forehead. I could not wait to get this off my face. Yuck...will be returning this today!

Been using a sample bottle for a couple of weeks now, and I'm def. going to spring for the full-size. After having a baby, my skin did a 180 and became much drier and more sensitive (I'm formerly v. oily), and although the Philosophy Purity cleanser I was using did a nice job of cleaning every pore, it just sucked my face dry, and no matter how much lotion I put on after, my face always looked dehydrated. The Zia moisturizing cleanser has been so much more pleasant--it takes off my blush &amp; sunscreen easily, and more importantly, it actually leaves some moisture in my face! The bottle says that the soybean oil included sinks in as you wash, and that seems to be the case. It leaves my skin clear, clean, calm and *healthy*. What more could I want? A certain repurchase...

SkinDry, Other, Not Sure

I was looking for a more &quot;natural&quot; cleanser but all I have tried are either too oily and do not remove anything or are very foaming and strip my combo/acne prone skin. Zia moisturizing cleanser is FINALLY meeting all my criteria! It does not strip my skin at all...removes every trace of makeup and has not broken me out. LOVE! I use it then apply the ultimate exfoliant and then rinse and tone with witch hazel. My skin is loving this stuff! I would repurchase and I highly recommend. I also love the new packaging because it is really easy to travel with and although the price is a little much for a cleanser $16 at whole foods...you do get a lot and you do not need much to clean properly. Highly recommend! :Edit: I noticed that in the summer this cleanser did not give me that &quot;clean&quot; feeling that I love...I have taken one lippy off for that but will go back to this cleanser in the winter for sure.

This is a great cleanser for normal/dry skin. It gently removes all makeup and-- even though it doesn't feel like it when you're using it-- does a very good job of getting rid of oil and grime without drying your face out. I originally bought the small size to try it out and then got the larger one because I loved it so much, reserving the small bottle for travel.

This is a HG cleanser for me. First I was using Zia Fresh Cleansing Gel, which I also liked, then I decided to try this. It is so gentle, and removes all makeup. My skin has never been so clear or so soft. I use this and every third day or so I use Kiss My Face Jojoba and Mint Facial scrub and this regime has made a world of difference in my skin. I haven't had a pimple in months. If you have dry skin, try this!!

This stuff felt awesome on my skin. I am on prescription Benzaclin for acne and my face is soooo dry, tight and itchy from the stuff. I have sensitive skin to begin with but with Benzaclin my face is even more sensitive. This stuff did not sting when I washed my face. UPDATE 11-2-06 hmmm stopped using this becuase after a few weeks i started breaking out, dosent clean off all makeup.

This cleanser is our HG. I have used it for about 5 years, and just love it. It realy cleans without stripping my skin. It is a milky, moisturizing cleanser, but does not make me break out. The most awesome thing about it, is that it is the ONLY cleanser that I have ever found that I can use to remove my eye makeup. I know there ore others, such as Philosophy Purity, that make the claim, but are still a little irritating. With this Zia cleanser, I rub it into my eye makeup just like the rest of may face, in the shower. Not only is there no irritation, but there is no oily film covering my eyes. My teenage son also uses this, and does not break out. As a matter of fact, his break outs have stopped since he switched from Cetaphil to Zia. **Update (10/17/2007)**This product and packaging have been &quot;improved&quot;. The packaging is worse now than it was. I like to store it in the shower upside down, so the product is ready to dispense. With this new twist top, the cap collects water unless standing right side up-not good. But the real disappointment is in the reformulating of the product itself. The thing is Zia has removed the parabens, but what have they added? Whatever it is, it burns the heck out of my face. My son said the same thing, and I had not mentioned it to him, so we both feel it. I have contacted the company twice, and they have not replied. I will continue to use this but only to remove my eye makeup. I am on a search for a new cleanser.