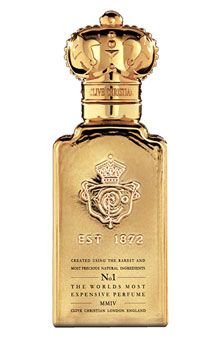 The ultimate fragrance, that generates compliments from literally everyone that smells it. Luxurious packaging, great scent. Very complimentary of a rich, regal taste. You have to be something special to wear this. Impossible to disappoint.

I can honestly say that I've never had the slightest curiosity about Clive Christian fragrances. After all, if your claim to fame is that you sell the world's most expensive perfume, you're probably going after people's wallets first and their noses second. But I received a trio of free samples recently, and when presented with a sample, I am incapable of letting it alone. So today I'm wearing Clive Christian No 1. The first thing I notice is that it appears to forgo its fruity top notes entirely-it's supposed to smell like pineapple, plum, mirabelle and white peach in the opening. What I smell instead is rose. A LOT of rose. And sandalwood, perhaps a touch of orris, and carnation. It smells somewhat dusty to me-but I should note that artificial rose notes in fragrance have that effect on my senses quite frequently. And during the drydown, it seems to be getting sour. Honestly, if this is really what people are getting for their $865 per 1.6 oz bottle, I have to question whether they've been casting a wide enough net before deciding on a fragrance purchase. I mean, when I compare this to the ingenuity of Parfumerie Generale, or the artistry of L'Artisan or Serge Lutensâ€¦there is no question that Clive Christian is taking people for a ride. Perhaps the grossly inflated cost can be mostly attributed to the bottle?

Definitely an over hyped and WAY WAY WAY over priced fragrance. It's ok, but a little obnoxious. I first sampled this in saks and the sales rep sprayed no.1 on paper for me, and I really couldn't get over how wonderful it smelled - so I said, the heck with it and I bought the travelers set. What I didn't realize was I originally smelled no. 1 for men that I thought smelled good. But it was too late to return it because I had used most of the 1872 bottle (which smells very good and the best out of all 3).

Basically? This is the Lana Del Rey of the perfume world. All hype and slick marketing in a pretty package, but no substance.

I bought this to wear to marry my ex, it was my favorite from the travel set of 3. It never happened. After I sent out the gold, fancy Old-English-style lettered invitations he followed up with some cancellation emails. I ended up wearing it to the Medieval fair instead a year later with my new husband. Talk about bad memories! The classiness of this perfume just stood out from my lifestyle like a sore thumb. It was mostly a powder-bomb on me, multi-layered, thick hours of aldehydes, and the jasmine and ylang, though creamy yet very elegant and nice, played a bit too nice, and only barely peeked out with a golden, eloquent &quot;how do you do&quot; out of all the richly layered dandy aldehydic flour-like white powder that had just been unceremoniously dumped all over the jasmine vine with a joyous flourish. The drydown was a soft powdered sandal, Mac says it all, but even here my favorite wood was dusted with this inescapable layer of aristocratic, fine, thickly layered powder which had coated every sinew of scent with its relentless presence. You might guess from this powder isn't high on my list. (Teint de Neige makes me want to gasp for air). I suppose that's how some like it, with their crumpets and tea and fine crystalware, but there are a lot more interesting things out there in the garden. I'll pass on being Queen for a Day of the Royal Family. The shoes just don't fit, alas; I am not actually Cinderella arriving at the ball, and that's OK. I resold them all on eBay for my (a lot less) expensive money back.

Clive Christian No. 1 distinguishes itself from aldehydic white floral idiom by virtue of the giant bloom of its price tag. It's very much in the manner of First, by Van Cleef &amp; Arpels, with a similarly pronounced ylang-ylang/jasmine central core overlaid with mandarin and a hint of greenness. &lt;P&gt; The sharp attack of the opening, which in No. 1 and in First calls to mind being momentarily blinded by sunlight, quickly mellows into a creamy, rich jasmine. Frequently, it seems that &quot;aldehyde&quot; is a code word for &quot;expensive.&quot; Chanels No. 5 and 22, First, and so on down the line are defined by their use of sizzling aldehyde, and these are the fragrances that in the past were most often associated with &quot;class&quot; or &quot;taste.&quot; This sort of false designation is largely lost now in a more democractic world, thanks to the upsurge in niche perfumery and its equally extravagant pricings. However, No. 1 is hermetically and eternally couched in the older definitions, while not being any more remarkable than any of its relations. &lt;P&gt; No. 1 is a well-made fragrance while not being an especially creative one. It is as dynamic as one would expect from the notes. Big and showy at first, it becomes more stable over time, with the artificial contrivance of the top becoming more realistic through the heart. A truly lovely jasmine is fundamental to the fragrance's development; this jasmine is just sweet enough and only slightly indolic on my skin. At this point, the earlier sharpness of ylang-ylang becomes recessive. This strongly focused, silky heart bouquet is overture to a very pleasing sandalwood drydown that seems further enhanced by a touch of vanillin. &lt;P&gt; The base of No. 1 is seamless, with no demarcation between notes. This is where No. 1 stops feeling like a collage of other white florals and like something unto itself, and where, were it eighty-percent less expensive, I might buy it. That base ups the ante over what I have always found is a sourness in the Chanel sandalwood base. Whatever excess exists at the top is a faint memory as No. 1 meshes with one's personal skin chemistry. Note must also be made that No. 1 does not turn soapy on me. &lt;P&gt; Although I find the anti-bourgeois marketing stance rather off-putting, I will admit that No. 1 is rather pretty. Stance aside, No. 1 occupies a safe middle ground between niche extremism and synthetic mall mish-mash. Whether it is in &quot;good taste&quot; or not depends on whether the wearer cares about such an antediluvian concept. I do not feel as if I would attract enemies by wearing it.

It's a nice fragrance, but soooooo not worth the price! I feel a little silly giving it 4 lippies, as it's not what you'd expect of a $2000+ fragrance. Scratch that, it's *exactly* what you'd expect of a $800+ fragrance: lots of hype, little payoff. Also, while the metallic bottle is a break from the traditional clear glass, every little finger print shows. &lt;br&gt;&lt;/br&gt; Carnation dominates this blend, right from the get go. The carnation note is similar to that of Bellodgia, but it's not nearly as acrid as the Caron scent. I believe that this is probably because No. 1 isn't a soliflore (unlike Bellodgia), so the rough edges that carnation can possess are softened by the other notes--which supposedly number exactly 1,000 in all. On the other hand, it may just be that No. 1 uses far better materials than Caron's current lineup. (I'm not familiar with vintage Caron, but after trying out most of the line over the past year, I'm sure that it couldn't have established its impressive reputation had the fragrances not originally been better.) &lt;br&gt;&lt;/br&gt; The carnation disappears after a few hours. No. 1's base smells like warm brown sugar and vanilla, with a touch of clove. It's quite sweet, and rather generic. It's not as saccharine as Pink Sugar, fortunately. It's similar to Kenzo Amour, but brighter and without the milkiness. &lt;br&gt;&lt;/br&gt; If this were priced like a normal, department store fragrance, I'd definitely buy it. I love carnation, and it's a well blended scent. However, I think that we all know that with a product like this, the real attraction isn't the product itself--it's the price!

I purchased the set of 3 tiny bottles in Fortnums after smelling virtually every other perfume in there. My favourite is No1, it is so refined and changes subtly throughout the day. X is harsher and yes I see the Gucci Rush connection though this is a much more complex fragrance. You can smell the quality of the ingredients which helps me to justify the price. I have tried layering it with Mitsouko and whilst it is complimentary I prefer it alone. This would be the one to repurchase for me if I can save enough! Update Feb 08 My husband discovered how much this cost and nearly had a coronary! He got chatting to the rep at Fortnums yesterday who admitted it was a completely overpriced but well marketed perfume range! Thanks a bunch!

Its a nice floral and you can tell that the ingrediants are top-of-the-line BUT it's not THAT amazing when yuo factor in the price. If money was not an issue, I would probably consider it. It seems to have something in common with another expensive perfume - JAR diamond water. If i were to spend $$$ on a floral my choice would be Shalini.

I just tried this on at Saks on 5th Ave. in NYC; the sales rep told me this is what Katie Holmes wore when she married Tom Cruise. It is the perfect scent for her new style; I bet she wears this all the time. I'm totally jealous and I would totally buy it but it freaking costs like $750 so I will never own this, alas. Too bad. It smells good--nothing too special but I can't say anything bad about it either. It's just so glamorous! Chic chic chic; the scent reminded me of the Hotel Majestic Roma (which is right next to the Hotel de Russie or whatever where the Holmes-Cruises like to stay in Rome). I guess you just have to pay this price for such a level of exclusivity. UPDATE: Everyone keeps saying they get Jasmine and Sandalwood from this one...that might've been earlier in the drydown for me but right now, 3 hours later, it's lush, fresh roses on me, with a tiny touch of powder and berries!