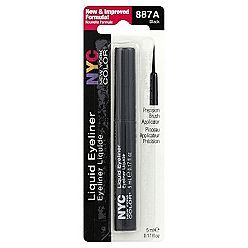 They still have this, hadn't seen it for ages, it was my only liner since a teen before I realized my eyes were sensitive to the brush applicator... not every tube had an evenly cut brush. Quality control? If that happens, it just needs to be held a particular way (side and diagonally not straight on) throughout application...when one is in a rush that's not always on one's mind. Besides, most things hurt my eyes. They've always been extra sensitive, that's why I went through so many liners trying to find one that was tolerated. The formula itself is good. I think it's better than L'oreal's.. Nyc's brush is better than the brush version of L'oreal too. It works excellently all in all as most cheap cosmetics seem to do now. It doesn't bleed or smudge or have an odd finish, does not gunk on lashes, brush is sometimes poky (varies) but one can work around that considering the price. If you like a simple thin line this is great. I do run out of this faster than other brands so I can't figure out how that works out for value of money but still I would recommend this to anybody on a budget. Rimmel too.

This is my most favorite liquid eyeliner, and I've tried them all. Some people prefer the hard felt-tip liners, but this is soft like a paintbrush which is much easier for me. It's easier for me to control and be very precise with it. The liner is very pigmented and it lasts all day (and often into the next, oops) without a primer on my oily lids. It never fades, flakes, smudges... I love how lightweight it feels on the eyes - some liners you can really feel, but I always forget I even have this on. ZERO irritation! I've cried while wearing it too, and while my mascara was everywhere, this stayed perfect. The only thing I don't like about it is how the finish is slightly shiny, I prefer a matte look, but that's easy enough to achieve with some black eyeshadow over the top. I really hope this is always available at this very affordable price and they never change the formula.

My favourite liquid eyeliner!! It stays put on my oily eyelids without smudging, which is a feat. And crazy cheap. The wand is very thin and flexible, I'd say almost too much, so you have to apply with a very light hand. The consistency is like thin ink, a little watery, and dries quickly with a matte finish. It is not waterproof, so I only have to worry about tearing up/crying, ha.

Im really surprised by this eyeliner,I think is high end quality. It doesnt fade,move,or smudge,lasts forever. Ive gone to bed with my makeup on,when I wake up the next day all my makeup is gone except for the eyeliner,its still there intact. The wand is a little to long but I can make it work. Too sad their discontiuning it

I'm surprised this eyeliner doesn't have a 5! The brush is the thinnest I've ever seen, and the formula is super thin but super black, so it glides really easily. You don't find yourself pulling at your eye. The brush doesn't get dry, it stays wet for a long time. I recommend this over stila stay all day, and Kat von d trooper. You just can't beat the price and how thin the brush is and how black the liner is. It stays all day on my eyes without fading, and dries a matte black. Just try it, for the price you have nothing to lose!

I've been using this eyeliner since I was 15 years old and I LOVE IT!!! This is a pretty good liquid eyeliner for those who are trying to get used to using liquid. Basic standard packaging, doesn't leak out, and simple to use. Goes on pretty smooth with a matte finish. Not as pointy as some other liquid liners, but can get that nice pointy end for cat-liner once you're a pro as using it. Stays on all day and doesn't move. I used this liner while I was playing softball. So I would put it on around 6-7 AM and wouldn't take it off til around 10-midnight. Admittedly, the inner corners of my eyes would come off, either from sweat or me accidentally wiping sweat off! Other than that, it stayed on! I'm not saying it's going to look the best, but it's not that bad! Now, if your eyes tend to get watery while putting on eye makeup, this liner is NOT for you! It will smudge while still trying to set and could turn into a big mess! It's not a fast-setting liner! This eyeliner isn't waterproof and doesn't claim to be! However, for me, it wouldn't come off in the water(or sweating!) unless I wiped my eyes! So I think, as long as you don't touch your eyes, this liner could possibly stay on in water. That'll have to be something for you to test out! All in all, this liner isn't the best, but it isn't bad! Like I said, I love this liner and I've learned to work with it simply because I don't wanna spend more than $3 on liquid eyeliner(except for NYX's vinyl liquid liner, but that's a review on it's on!). I say give this liner a try if you're willing!

YES YES YES YES I've been an eye-liner addict since I was thirteen, and had given up on drug store eye-liners after intense colour bleeding/flaking/crappy pigmentation. BUT THIS SWEET GOOSE HAS RECTIFIED THAT. Super black, a flawless matte finish, it doesn't bleed or feather on application. The small brush applicator isn't the best, and after using high end felt-tip liners for so long, I have minor difficulties controlling the brush strokes. Nothing a good concealer and practice can't fix. Super cheap and super WONDROUS. Will repurchase and will probably purchase fifteen hundred to put in my casket upon my death so I can go to heaven a happy gal. YES

Pros: -It dries matte -The brush is precise (or I'm just used to it) -The formula is a nice consistency -It creates a a good, standard line Cons: -Sort of unforgiving to mistakes (most liquid liners are like that) -The color isn't as black as I would like it -It is not waterproof whatsoever (for some might be a pro) This is a good product for those who don't want to throw down a lot for a liquid eyeliner but there are a lot better options out there on the market. This isn't for the leaky eyed folks out there either because it will run if you get just a drop of water on it. Honestly, it's not bad but it's also not the best. I've used it for a long time and have been satisfied with the quality but I would have preferred to have a gel just because that is what I like to use for liner.

I've repurchased this eyeliner so many times and I think it's the best inexpensive eyeliner. I wear this everyday to school and usually take my makeup off at night, but before I do I always look at the mirror to see how my makeup lasted. It does smudge a little though, but you can't expect it to be like a permanent marker on your eyes especially since its just a 2 dollar eyeliner. And makeup is always meant to come off at the end of the night. And yet I still think this is the best eyeliner ever.

This eyeliner is fantastic. My favorite. It is very pigmented, and black is very intense, so you only need to swipe once. The texture is easy to work with, not too thin, not too thick. The brush is very slim, which might take some getting used to, but it lets you apply a very thin line if you need to. Lasts literally ALL day with or without primers, with or without setting, heat, cold, or rain. It doesn't go anywhere from where you put it. And at the same time it is easy to remover with just facewash- dream came true! The packaging is sturdy, so the product doesn't dry out for a very very long time. The only thing that is not so good is that the writing on the tube gets scratched off really fast, but that's a very minor thing. Great for every day and for going out. Have repurchased and will repurchase again. A really excellent, non-irritating product, better than much more expensive liners I've tried.